Viacom has ‘done the math’ and to reach new audiences the future is social - it’s worth the revenue share, according to Kelly Day, President, Viacom Digital Studios. 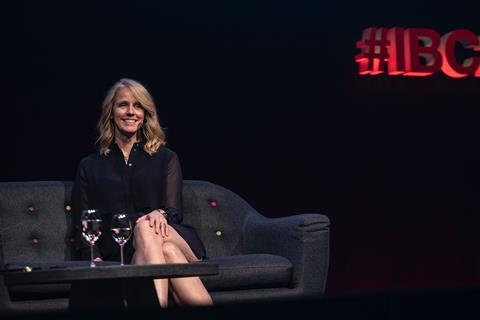 “Do the math”: Kelly Day

Speaking at a keynote session which looked at how traditional broadcast brands can evolve to reach new audiences, Day eschewed the idea of content owners developing and operating their own websites and platforms.

“Feeding your own platform is expensive and requires investment. Distributing across the social landscape on channels like Facebook is such a huge opportunity it’s worth the revenue share component – if you do the math it works out in your favour,” she said.

Day added that it has allowed Viacom’s digital offshoot to be nimble and repackage its linear TV brands across new platforms.

As a case in point she highlighted the revival of iconic MTV programme brand Cribs for the Snapchat generation. It has been reinvented as a three-minute series and it is now shot vertically for social network which distributes the show via its Discover platform.

“It’s been seen by tens of millions of people and we were able to hold onto the sponsorship rights,” she revealed.

The former MCN exec added that it was Snapchat that approached Viacom, rather than the other way around. “These platforms really understand the power and strength of our brands.”

According to Day, repackaging old SpongeBob clips to feed the nostalgia of Facebook Millennials is another example of how Viacom is leveraging its linear brands in a digital context.

Distributed on Facebook, Bikini Bottom Mysteries takes thousands of hours of old SpongeBob footage and develops a short story around the property for a generation of 18 to 34-year-old fans.

“The first mindset is that every platform is different and you have to programme to the platform and to the audience,” Day added.

Day admitted that Viacom Digital Studios – which was spun out to attract new digital-first audiences and comes with its own P&L – blurs the lines between the marketing and brand extension of existing linear properties and new revenue opportunities.

“We will continue to ensure that these brands are relevant and exciting but the intention and desire is to build a real business as these platforms evolve,” she said.

Viacom is one of the companies in talks with Jeffrey Katzenberg about distributing content from his new $1bn short form fund and Day is excited about the creative opportunities that this will offer.

“In the early days of online video there was a perception that short form was all about cats on skateboards. The truth is that it has evolved to a place where you are not really on the mercy of a linear clock. But you really do need a clever combination of amazing production and the right IP to cut through the noise.”