How We Built It: Sky News’ dedicated channel ‘George Floyd Killing: The Trial’

Sky News conceived and launched a channel dedicated to the trial of Derek Chauvin, who is accused of the murder of George Floyd, in just nine days. IBC365 finds out how it was done.

Former Minnesota police officer Derek Chauvin is on trial in Minnesota on two counts of murder and one count of manslaughter for the death of George Floyd, an unarmed black man, in the city of Minneapolis last May. 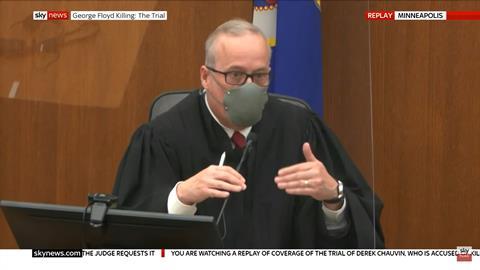 The jury’s decision is the most eagerly anticipated in the United States since that of OJ Simpson in 1995, when Sky first broadcast live feeds from a court.

“An idea came forward in the newsroom for a dedicated channel which is something we’ve done before,” says James Whicher, director at Sky News.

“With Covid lockdown and working from home we were keen to look at new and different ways of working a complicated production without being the studio. Our galleries are quite a precious resource and tying one of them down for a month could impact our day-to-day operations.

“So, the question was asked of the tech team, is it possible to do a dedicated channel with a remote set up with minimal crewing to look after it for a month?”

A key component was mirroring the look and feel of Sky News branding without using any of the existing graphics capability controlled by hardware in-house.

“We needed it to run for several weeks so the ability to create graphics and tickers in the cloud without having to tie up expensive machinery was important,” Richard Pattison, Sky News

“I thought the main problem we’d face would be to recreate our entire branding at such short notice,” Whicher says.

“We had a chat with Singularlive (a cloud graphics specialist) and they put together our Sky News look within a couple of days. It sends out a URL from the cloud that you just copy into the system here and the live graphics appear. It’s remarkably straightforward.

“We’re taking the main courtroom mix and one ISO of the judge so that if the producer felt anything was inappropriate for the viewer to see we can cut away,” Whicher says.

The live feed for George Floyd Killing: The Trial is from US network Court TV distributed over a LiveU Matrix in the cloud and downloaded at Sky’s premises at Osterley, just outside London. It’s a feed that Sky News would take anyway in order to pull clips for news coverage of the case. The feed is converted from US standard 30fps to 25fps (1080p 50i) and decoded from MPEG (HEVC) transport stream to uncompressed video in SMPTE 2022-6 using kit from Open Broadcast Systems. Its software-based encoders and decoders are used for a number of operations at Sky.

Cloud flexibility
The program feed is routed from Osterley in SRT into the easylive.io cloud and delivered in SRT to the Sky contribution hub. An MWEdge software gateway from Techex provides protection and monitoring for the content on ingress and egress from the cloud.

“Sky and Techex have been working together for almost 10 years designing and delivering systems for video compression, uncompressed multiviewers and video transport,” says Russell Trafford-Jones, Manager, Support & Services at Techex. “The deployment of software-based MWEdge for transport is a natural next step.

The MWEdge software can sit on VM, bare metal or cloud and was recently shortlisted for an IABM BaM award. “MWEdge works well because it can use RIST and SRT for delivery over the internet with seamless switching between paths using ST 2022-7 even when using RIST and SRT,” he adds. “It allows Sky to verify the signal is good incoming to them with encryption supported for security.”

The whole channel can be run by production staff rather than a director. Explains Whicher: “Because this is the first project of this nature and scale we set up a workstation in the Sky news room. Once set up, a producer logs in and runs the channel for the day which is a bit unusual. We needed something that was operationally relatively straightforward to use. To make it as easy as possible we put the workstation in the newsroom with access to other producers if required but we could just as easily run this from someone’s home.” 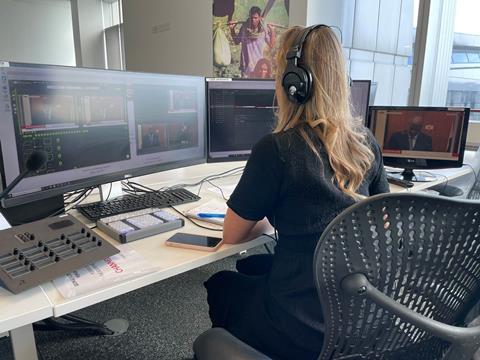 Indeed, Whicher is able to monitor the channel from home and could take control at any time. He even customised an X-keys panel for easy cutting between sources although mixing can also be done using a keyboard.

“We’ve decided to let the trial speak for itself but we do have the flexibility to add studio presentation or live commentary if we need to. One of the nice things about a cloud-based system is that it is expandable in short order. If a decision were made to have a correspondent across the coverage we can set that up and bring it in as another input. That reporter could work from home as well.”

With a deadline of little over a week before the trial began, Whicher admits to being initially a bit daunted by the task but in two days came up with a demo platform to show to the editorial team.

The broadcaster has created pop-up channels before (Sky prefers the term ‘dedicated channel’) including a Brexit-Free news channel in 2019, but this is the first time it has done so entirely in the cloud. 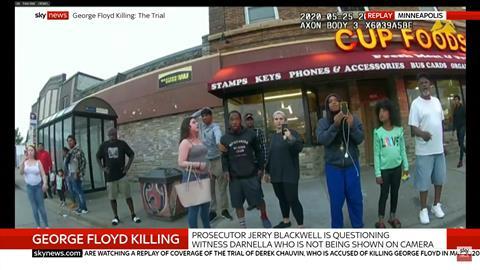 The live coverage of the trial is a first for Minnesota

“It involves a lot of collaboration with the technical department at Sky but we’ve got a fabulous wealth of knowledge so there was never any doubt that we’d deliver.

The project was rapidly spun up, doesn’t lock up any gallery resources at Sky HQ and can be operated by just one person.

“It was a very quick turnaround from inception to going live in a matter of days and we did so without any real difficulty,” says Richard Pattison, Sky News deputy head of news technology.

“It was mainly a matter of getting everyone lined up in time. We also needed it to run for several weeks so the ability to create graphics and tickers in the cloud without having to tie up expensive machinery in Osterley was important.”

Whicher suggests that setting up channels dedicated to covering significant events could become a regular feature of Sky News output.

He says: “On the basis of how quickly we managed to put it on air without any major technical hiccups I think dedicated channels in the cloud will be increasingly looked at and I would think be a normal operation in years to come. The ability for 24-hour news channels to react to breaking news events, in greater depth, with clean, stable feeds and on brand is incredibly important. The technology is here to do it.”

George Floyd Killing: The Trial is available on Sky channel 524, on YouTube and online through the Sky News website and app from 3pm to 11pm Monday to Friday for the duration of the trial.

Mixing in the cloud

Sky’s brief to easylive.io was for a 24/7 video mixer, cloud based, from where they could pilot and run the show collaboratively and remotely.

Another goal was to ingest multiple live sources (SRT, WebRTC, and other video protocols) and to be able to mix it with overlays, lower thirds, graphics, perform picture in picture and add remote commentators as needed for live commentary on the trial - all the basics required with a video mixer.

A further requirement was that one operator be able to run the show (including the other technical partners onboard).

“This is exactly what we do,” says Philippe Laurent, CEO and co-founder Easylive.io. “We offer a fully cloud based visual mixer for switching multiple live inputs, VODs, graphics and overlays. Everything is mixed in real time in the cloud to deliver broadcast-grade live feeds.”

While easylive.io operate one cloud, Singularlive’s graphics operate in another with no issues integrating the two.

“Singular has been a long-time partner of ours,” explains Laurent. “We are the first cloud-based service to integrate HTML overlays, therefore it was a no brainer to work closely with Singular. You add a new input in your mixer and select Singular to receive their overlays. This action is literally performed in two clicks.”

Control of the channel is enabled on Sky’s desktop through Easylive’s GUI. “Our video mixer has been built under an API, meaning that you can fully control it from external services and automate the production,” he says.

The service is fully SaaS, runs on AWS and is being deployed worldwide.

“Wherever you are located in the world, you can contribute and collaborate with your colleagues in real time,” Laurent adds.