Robycam Compact gains freedom of movement in a smaller area

Movicom has launched a lightweight version of its Robycam 3D cable-suspended camera system, the Robycam Compact, which is more suitable for studio use or for small and medium-sized sports venues.

The Compact can move freely through space following any 3D trajectory within a working area. This is enabled by a specially developed mathematical model serving as a base for real-time control of four automated winches, advanced gyro-stabilisation and motion control techniques. 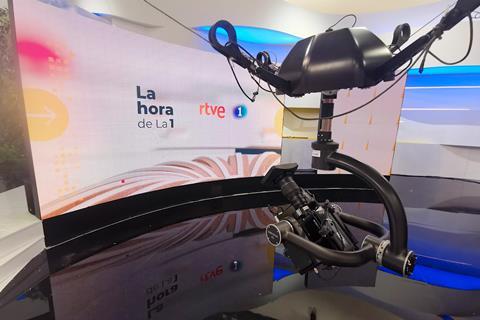 Available in both 2D and 3D modes, Robycam Compact can be used for a wide variety of applications and supports augmented reality production.

Reduced weight and its compact size facilitate transportation, installation and dismantling, and it is designed to be a reliable and secure system that meets international safety standards.

Its winches may be easily placed in venues with limited space, still providing enough pulling force to achieve the maximum working height of the camera. The system boasts a drop angle of only 4.5º, allowing it to work in low ceiling environments. The compact, lightweight dolly with its gyrostabilised camera head can control camera orientation along with the lens parameters.

The Robycam Studio version has been installed at Sky Italia and RTVE Spain, where the producers of breakfast TV show La Hora de La 1 and Up Films needed a system that would provide production value in the small space of Prado del Rey’s Studio 1. Despite its smaller size, the system has full positional tracking and camera data compatibility with all major augmented reality graphics systems, such as the Vizrt system used on La Hora de La 1.