Dave Duvall, Chief Information Officer at Warner Bros. Discovery, spelt out some of the challenges and opportunities facing the newly merged company in an IBC Conference session yesterday.

Duvall said Warner Bros. Discovery’s biggest focus was to “really bring us together as one team and one company”.

From a technology point of view, he said that he was focusing on “the most impactful and largest areas that we want to make an impact on in the first year”. He explained that the company is looking at areas of overlap between the legacy Warner Bros and Discovery businesses where it can standardise procedures and find “common ground”.

He cited playout technologies. “We’re definitely on a standardisation push: How can we align our platforms around the world and bring those together? We have north of 850 distributed linear feeds within the combined portfolio.” He also picked out collaboration technologies, such as email, meeting and chat platforms.

Duvall addressed recently announced plans to bring together HBO Max and Discovery+ as one OTT platform. “The plan is do that around the world. We’re going to start in the US as early as next summer, progressing sequentially to LatAm at the end of ‘23, EMEA early ‘24 and APAC as well in ‘24”

He said a key challenge was incorporating live offerings, such as sport, within a combined OTT platform. “Live is still very intensive from a human capital perspective. It takes a lot of teams and operations to pull that off,” he said. 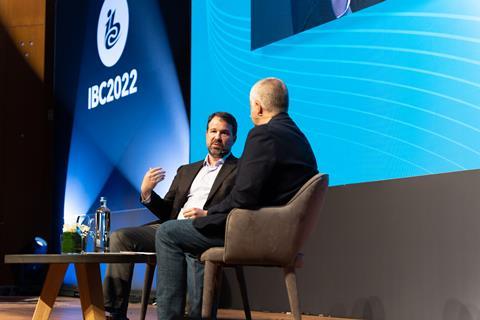 Asked what keeps him awake at night, Duvall cited the threat of piracy. He spoke of the millions of dollars invested in the new HBO series of House of the Dragon. “You do not want that programme leaking in a way that undercuts the big moment that it’s been building to for years… For me it’s the cyber and content protection lens that is the trickiest.”