Hall 12 proved to be a fertile hunting ground for those in search of gadgets and gizmos for acquisition and camera support, writes David Fox.

Trend spotting is one of the fun things to do at IBC, and at this year’s show there were a few noticeable themes that bubbled to the surface.

Artificial Intelligence (AI) and machine learning is undoubtedly coming, judging by the conference papers, although real-life examples of it were not so widespread, and high dynamic range is becoming a major preoccupation, even for HD production.

However, as a reporter for the IBC Daily at the show, my beat is predominantly acquisition, where the number of new gadgets and gizmos seemed higher than it has been for several years – particularly in camera support. 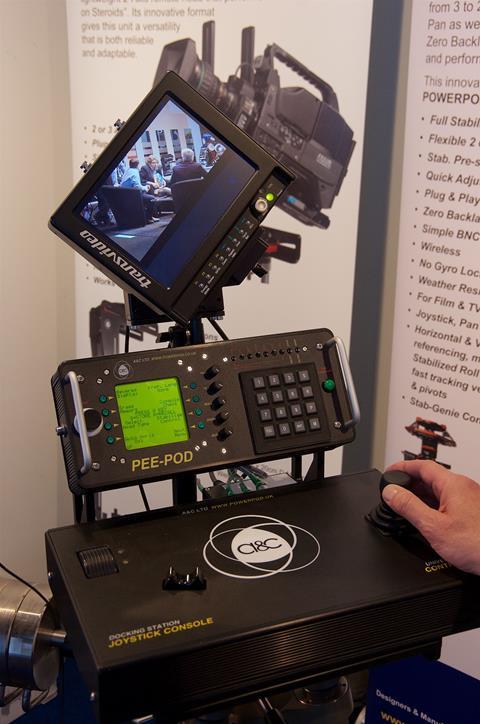 On a roll: the Gizmo primes monitor turns to match the camera

When this was first used on the new Mary Poppins movie, someone had to rotate an iPad to keep the orientation when the camera was rotated, as it was impossible to keep track on a static monitor. “Now we’ve automated that,” said CEO, Frank Fletcher, and the monitor rotates in sync with the camera (the horizon stays stable), so operators don’t have to twist their heads to see it.

There is also a HeebyJeeby button. This simulates an explosion or earthquake, as it shakes the camera. It looks wildly uncontrolled but is very controllable.

To stop stabilisation technicians having to reach across the camera operator to operate the control systems, there is also an iOS app for all the controls, which Fletcher believes is a first for gyro stabilisation.

Arri’s new SRH-3 three-axis fully stabilised remote head is incredibly manoeuvrable, designed to be flung around on the end of a crane while keeping even a heavy camera stable. 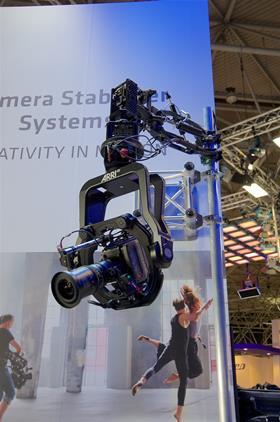 It weighs less than most rival heads (9kg), and takes a heavier load (up to 30kg), including Arri’s Alexa 65.

“If you have a lighter head, everything behind it can be lighter,” such as the crane, said Arri product manager, Curt Schaller.

All of Arri’s stabilisers are mechanically balanced, “which means its [direct drive] motor can devote 100% of its power to the only job: stabilisation.”

Users can control everything on the device (camera, gimbal and lens) from one controller, via a single wireless (or Ethernet) connection, using the Master Grip-equipped remote control. 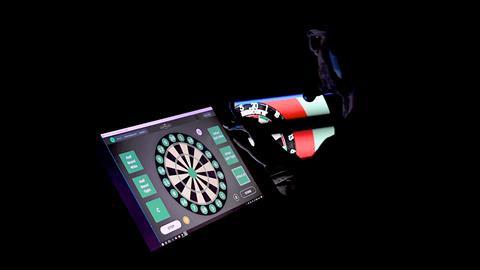 Touch and go: MHC in use for Sky Sports darts coverage

Its user interface uses skins - designed to be relevant to a particular sport, environment or camera position, and was initially devised to control robotic cameras for Sky Sports coverage of PDC Darts tournaments. An intuitive ‘dart board skin’ allows operators to touch part of the board to trigger a pre-set camera move, improving speed, accuracy and smoothness when doing close ups. There are also skins for tennis and football, and a generic skin can be customised for a studio, stadium or other live event. It also works with pan bars or even a games controller.

Productions that use DMX lighting controllers often have spotlights automatically follow performers around a stage. There is now a simple way to add robotic cameras that can do the same, with BR Remote’s addition of DMX control to its upgraded CamBall3 remote weatherproof camera and new Proteân XMi Remote Head.

These can be controlled via eight DMX channels, giving 16-bit precision in pan, tilt and zoom (plus focus and iris). When used in Auto Tracking mode it can follow a designated artist very smoothly, including zoom and focus, thanks to BR’s PMS (Predictive Move Smoothing) algorithm, which predicts moves, smoothing between them, and copes with any missing data packets.

The Proteân head can take a very wide range of cameras and also adds 24-bit control for virtual and augmented reality applications, via Bradley M* and Free D protocols. It has Move Tracing to record a manual move for accurate replay, with adjustable timing or in reverse - useful for performing an accurate zoom in. This allows operators to set up simple motion control moves without a computer.

Big moves for a small device

Not all new advances in camera support involved automation. The C-pan Arm and new, smaller Mini C-pan Arm from 9.Solutions Technology are a cross between a slider that can do curves and a small jib that can also curve, producing fluid moves that you wouldn’t expect from such a small package. 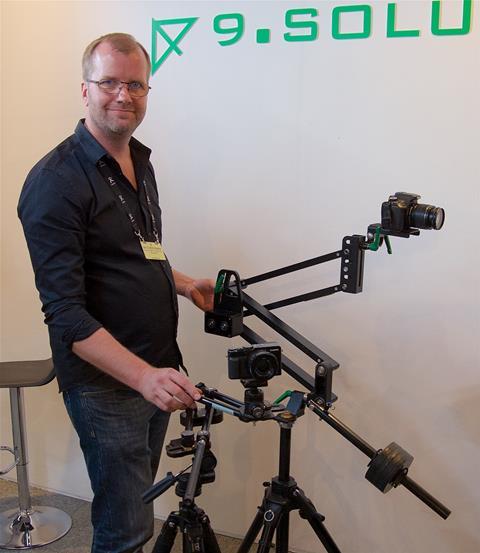 BR Remote’s cameras were part of a new multi-camera system from PromptingPlus. Standard prompting systems use partially reflective glass to display the prompter text, but QuVu uses a patent-pending 100% mirrored bottom third on that glass to enable it position an additional camera or cameras in the eyeline of the presenter. It does this by mounting the pan/tilt/zoom camera underneath a CueScript PTZ-mount prompter hood, facing upwards, to get the shot in the mirror.

“It is especially useful for small studios as it can double the number of cameras without taking up any room,” said Mark Cooper, technician, PromptingPlus, giving two-shot, close up, etc., from one or more additional cameras. It is also tremendously useful for presidential-style podium prompters, allowing eyeline shots of the speakers without the glass being in shot. The camera can also turn around to see the audience, or follow an award winner to the stage.

Other cameras offering a different view were introduced by Indiecam, which launched its nakedEYE s4, an 8K VR camera system that delivers 6K after stitching and packs four camera modules into a tiny package. Each sensor has a global shutter, recording to 12-bit CinemaDNG Raw. 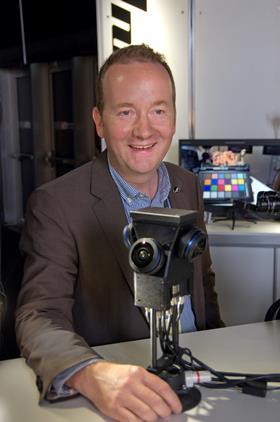 The total bandwidth is 1.4GBps, delivered via IP, and Indiecam is working on real-time stitching. It also has a special version of nakedEYE that can do live streaming, which benefits from the fact that “our parallax is really low,” explained Indiecam CEO, Raphael Barth.

Also launched at IBC was the indieDICE 4K, a 2/3-inch 12G-SDI PoV camera for broadcast and film production. The all-in-one unit can be fitted with a wide variety of lenses, and the single 12G-SDI cable delivers 4K 50/60p, while an additional output allows simultaneous 12G Raw recording for cinematic post processing.

It is larger than the tiny HD indieDICE, but Barth hopes to have smaller versions in 4K soon (they just won’t share the future potential of this 4K camera). There will also be a global shutter version.