Calrec has used IBC to launch a new approach to audio mixing, designed to keep pace with the changes broadcasters are experiencing in their production workflows. The two consoles unveiled at IBC, Argo Q and Argo S, represent a “flexible control philosophy that breaks the traditional geographic tie lines between processing and control”, according to the company.

Like its mythical namesake, the Argo concept has been on a journey to get here, according to Dave Letson, VP of Sales for Calrec Audio. “It’s an amazing achievement, particularly with the challenges of Covid,” said Letson. “A lot of our team is working remotely, so we’ve done a lot as a company to finally come together today to announce these consoles. As for the name, Calrec has always had a Greek theme, and with the three-year experience everybody has had since last IBC, it just felt poignant to have something that references the ship. 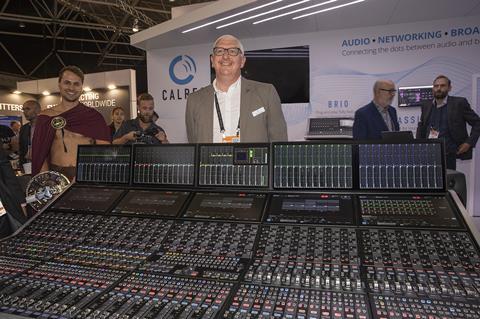 Letson: ‘Argo is the first product to run entirely on the new Assist web UI’

“Argo is packed full of new features for customers; all of the connectivity on the product is natively IP now, we can put the surfaces very large distances away from the cores,” Letson continued. “We can also make the consoles very flexible so customers can really choose how they want to lay them out. It uses Calrec Assist, which is our new online operating system, to unify all of our product range. Argo is the first to run entirely on this new web UI.”

Built around an expanded version of Calrec’s ImPulse IP core, Argo can power up to four independent mix environments, including headless mixers accessed on the public internet, with each mixer able to access more than 2350 processing paths on a single console.

Argo is fully modular with interchangeable hardware panels; there are two mid-level rows of interchangeable panels on the larger Argo Q model, and one mid-level row on the compact Argo S model. Calrec has also introduced a comprehensive system of user templates to instantly change the hardware user interface to meet changing requirements or user preferences. With the Assist UI at its core, users working on physical hardware panels or on a remote GUI will encounter the same familiar interface.