Creating where TV goes next

“In 10 years’ there will be no SDI interfaces - it will all be AMPP,” declared Andrew Cross, CEO, Grass Valley. “We truly believe we are creating the future of media production and making it open to everybody.”

Grass Valley has already partnered with 40 companies to integrate product onto its AMPP platform. Fourteen of them, including Haivision and Caton, are demoing their approach on the GV stand at IBC. Now the company is officially opening its infrastructure up to the whole market. 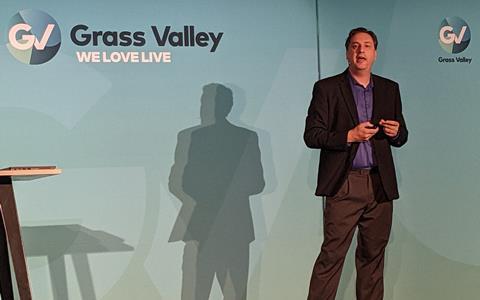 “Even our competitors are welcome onto our platform,” Cross said. “AMPP will connect everything.”

While Grass Valley has hitherto been keen to promote AMPP as the industry’s onramp to the cloud for live, its executives were at pains to stress that AMPP doesn’t just mean cloud-native – or live.

“What makes us special is we are leaders in hardware-based product and the leaders in software,” Cross said. “We bring those pieces together and no one else can match it.”

While IP was the driver for the venture capital-backed company’s “super high” investment in the AMPP environment, it says the platform is designed to be interoperable with kit and workflows both software and hardware whether in trucks, on premise, remote, hybrid or fully cloud.

Daniel Url, Chief Product Officer, said: “You decide which direction you want to go and we have the migration path for you.”

In July alone, there were 11,108 applications running simultaneously on AMPP producing 3 million hours of programming. Its fastest growing app is Playout X which has helped onboard 1000 playout channels in the last six months.

“That proves we are doing quite well,” Url said.

At IBC2022 the company is announcing 11 new hardware upgrades including a base station for customers staying in the SDI realm. It’s introducing 20 major software upgrades plus 24 AMPP apps and 80 features for the platform.

“You will see a different Grass Valley at IBC,” confirmed Neil Maycock, CMO.

“We are opening AMPP to the industry.”