Bandwidth availability for wireless cameras is under increasing pressure, as authorities assign frequencies to more lucrative uses, and broadcasters seek to increase numbers of cameras at events, such as this week’s US Open tennis in Queens, New York, which finished today.

To counter this, Gravity Media chose Domo Broadcast Systems to provide wireless links for 23 cameras with a significantly reduced RF bandwidth than would normally be needed - and they had to achieve this in just 10 weeks. 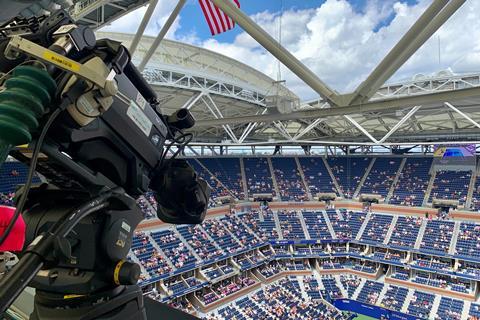 Holding court: A Gravity Media camera in use at this week’s US Open

“Bandwidth has been squeezed globally for broadcasters, who are having to do more and more events with less bandwidth,” said Simon Martin, Sales Manager, Domo Broadcast Systems.

“It’s been a long-standing issue at the US Open, the continual squeezing of the spectrum in New York,” said Ed Tischler, Gravity’s CEO.

Gravity looked after the host broadcaster and was unilateral provider for Amazon and Eurosport. Tischler said “only Domo met the requirements” of it and ESPN. “Managing spectrum is really important, to make sure there is no interference”, especially with 17 courts to be covered on the same RF (7GHz) network. This challenge will only get worse as broadcasters move to “higher resolution formats, particularly UHD and HDR”, he added.

The set up in Queens used Domo’s latest Eclipse-TX 5MHz system, with HEVC encoding, which Gravity had found in testing offered much higher quality pictures at lower bandwidth than rival systems. Although Mesh systems (which DBS also offers) are often put forward as the answer for lower bandwidth use, “it’s not tailored for ultra-low latency video”, said Martin. The 5MHz channel is half that normally considered necessary for HD (1080p60) production using H.264 encoding. The Eclipse-TX was developed to allow UHD in a 10MHz channel.