Solutions for every OB from Broadcast Solutions

Broadcast Solutions runs IBC’s largest outdoor stand and that’s a good thing because it has arrived packed to the rafters with examples of its systems integration and production tech portfolio.

This includes two OB vans on display, reflecting the group’s international expansion and approach. One is developed and built by Lithuanian systems integrator TVC solutions for Estonian public broadcaster ERR. The second mobile facility is a full-trailer OB van for Swedish production provider DMC, developed and built by the group. 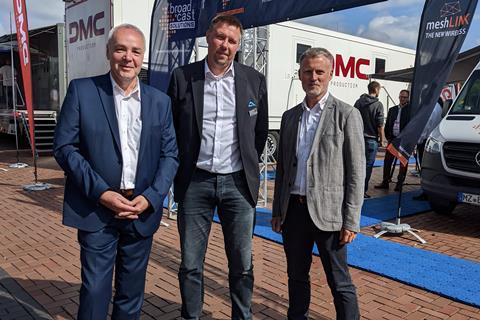 An IBC-first is the company’s meshLINK wireless transmission system demonstrated at the outdoor stand.

meshLINK represents the latest developments in RF technology on the one hand and breakthroughs in ultra-low latency UHD HEVC encoding on the other, now combined in one product.

“This is a true duplex IP-based wireless system allowing a wide range of functions during live broadcasts, like RCP and telemetry integration,” explained Rainer Kampe, CTO.

Among extensive VAR developments, is the Streamline OBVAR concept in which live production and VAR services are operated from a single unified, mobile platform.

Designed for game coverage of four to eight cameras, the OB van hosts the gallery, the VOR and the uplink capabilities.

Also on site are Birds Camera Solutions’ cable camera systems. Available for rental and sale, all systems are equipped with native AR integration and gyro-stabilised remote heads that allow camera movements in all axes. Part of the service is the production support on-site with planning and rigging, as well as experienced camera operators and camera pilots.