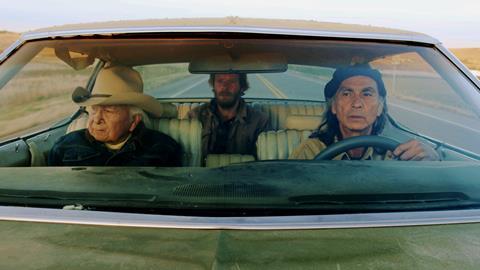 Behind the scenes: Neither Wolf Nor Dog

Scottish filmmaker Steven Lewis Simpson on how he overturned conventional wisdom in making, marketing and distributing his Native American movie from the ground up. 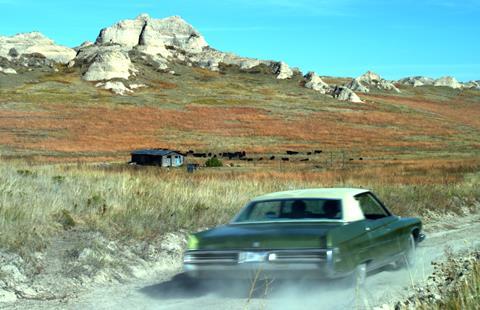 The subject of a new drama about Native American Indians which features actors with connections to the Battle of Little Big Horn is extraordinary in itself but equally incredible is the story of the film’s production and distribution which has defied decades of Hollywood logic.

Neither Wolf Nor Dog is an ultra-low budget road movie shot on location in a native American reservation and featuring 95-year old star Dave Bald Eagle, who acted in films with Errol Flynn and Marilyn Monroe and whose grandfather fought General Custer at the Battle of the Little Big Horn in 1876.

Based on a 1995 novel by Kent Nerburn, the contemporary story culminates at Wounded Knee, site of the notorious massacre of the Lakato tribe by the 7th Calvary in 1890 in revenge for Big Horn.

Scottish filmmaker Steven Lewis Simpson knew that traditional film distributors would have no idea how to access the core audience for the film, so he opted to bypass them and self-fund distribution directly to cinemas.

Two years on and counting, the film has played in over 200 theatres in the US becoming one of the biggest self-distributed films of recent years and the longest theatrical first-run movie release in over a decade.

At every stage Lewis Simpson has turned conventional marketing wisdom on its head. Ignoring LA and New York, he opened in small theatres, starting in Minnesota, South Dakota, where the film is set. In its first week at a single screen in Bemidji, MN it was the number one film beating nine Hollywood movies and getting over 1,600 admission in a town of 15,000. 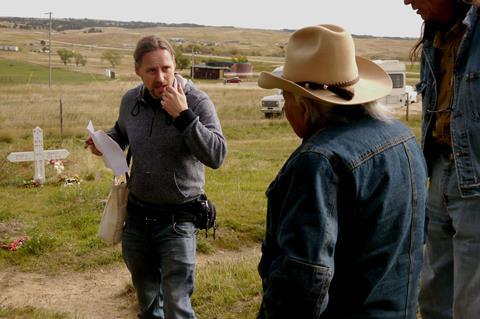 It has continued to astound the industry ever since. It was the most successful self-distributed movie of 2017 and 2018 in the US. At a theatre Washington State, eleven 2018 summer blockbusters were beaten by this film made for just $30,000.

Neither Wolf Nor Dog has done what appears to be a first from a self-distributed film-maker by releasing in multiple countries including Canada, Bulgaria (where the Scot now lives), Scotland and, from August, the rest of the UK.

All while competing against films with marketing budgets in the tens of millions of dollars. Even arthouse distributors set aside $100,000 for marketing. Lewis Simpson started with less than $1000. Having passed 75,000 admissions earlier this year, the film has taken over $500,000.

Corman protégé
So, what’s the secret? It helps if you have an entrepreneurial spirit.

Aberdeen-born Lewis Simpson opted out of university to qualify as one of Britain’s youngest stockbrokers, but soon packed up to join Roger Corman’s Concorde Pictures, aged 22.

“I sent a script on spec to Corman and chased it up with a phone call. I was told how to apply as an intern, packed my bags and went over – Corman wasn’t going to turn down free labour.”

”In the same day I could be helping the head of legal, the head of sales or assisting set construction. It demystified the business of filmmaking.”

Corman is famous for bucking the Hollywood system to churn out low budget B-movies with a can-do zeal that puts larger studios to shame.

There, Lewis Simpson got a quick education about the business. “In the same day I could be helping the head of legal, the head of sales or assisting set construction. It demystified the business of filmmaking.”

After returning to Scotland, he premièred first feature Ties at the Edinburgh Film Festival in 1994, winning best film at the Cherbourg Film Festival. It was researching for a screenplay about the culture and fate of the native Americans that changed his direction.

Indian nation inspiration
A ‘ghost shirt’ reputedly worn by a Sioux at Wounded Knee and brought to Glasgow by Buffalo Bill Cody’s wild west travelling show in 1891, was to be repatriated to the Lakota as part of the battle’s centenary. Lewis Simpson flew out to Lakota country on the border of South Dakota and Nebraska, ahead of the Scottish delegation and got talking to the locals.

“Within three hours at the reservation I was asked by Russell Means, the most famous Indian American national since Sitting Bull, to film three days of political meetings that he was conducting. That got me sucked into this journey of making a documentary over thirteen years about the reservation.”

He shot feature documentary A Thunder Being Nation over 13 years and made love story Rez Bomb in the same location, before capping a trio of Native American projects with episode US TV show The Hub about arts, culture and entertainment within Indian Country. It was at a screening that he met Kent Nerburn, who was frustrated at trying to get studios to adapt Neither Wolf Nor Dog for the big screen.

Filming on a shoe-string
They managed to bankroll Neither Wolf Nor Dog with Kickstarter campaigns using social media to inform passionate fans of the book, keeping costs low with Lewis Simpson taking on all key roles himself. 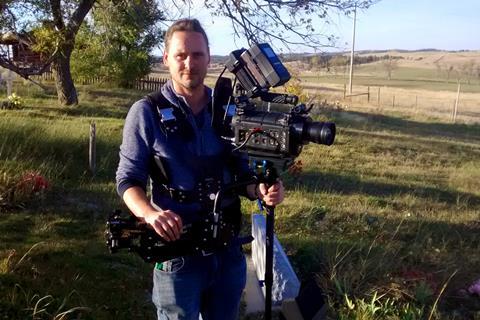 Steadicam: One of the few pieces of equipment Steven Lewis Simpson used

He bought and sold all the equipment used in the film’s production, making a profit on the deals. This included a RED One camera, the lighting, a Steadicam and three vehicles used as props in the films, one of which he more than doubled his money on.

The skeleton crew of three including a sound operator and assistant filmed over 18 days with evenings spent casting, location scouting or making props.

“We were chasing our tail, but the weather was spectacularly reliable for the Great Plains and things fell into place,” he says.

He knew that distribution would be a hard sell and contacted the main agencies brokering deals in the US. None replied. So, he began by targeted screenings in markets where he knew the film would gather a lot more attention and support.

“If you all follow through and help get the word out then we can pull out good box office numbers. That will encourage other theatres to take the film and it can start cash-flowing itself.”

Distribution one town at a time
For Rez Bomb, he bought a projection system and drove from LA to Pine Ridge and made a series of screenings in halls around the reservation.

“The strategy from the very beginning was a big fish in a small pond, not a minnow in an ocean.”

The film is deliberately not rated. While this prevents screening at national cinema chains like Cinemark it meant that Lewis Simpson could reach out to schools without having negative perceptions (the only issue is some slight profanity).

“In Independence, Oregon, we brought in 325 pupils one day from a local Bureau of Indian Education school, for example. The strategy from the very beginning was a big fish in a small pond, not a minnow in an ocean.”

Other tactics included bespoke mails shots. In the Bay Area he personally emailed 1400 members of the local community to encourage them to go to the one screening in their neighbourhood.

The majority of the initial $1000 marketing budget went on posters for the film – most of which he recouped in retail sales. 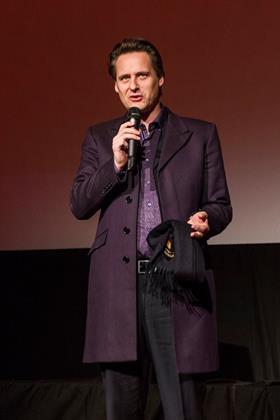 His trading skills came in handy again in booking films into cinemas. He learned that one established film booker was delivering 34% of box office receipts back to the distributor. Lewis Simpson says he averaged 48% on the same screens.

He established InYo Entertainment to manage theatrical distribution and generated all the Digital Cinema Packages (DCP) himself, including foreign language versions, using software available online and distributed the files to cinemas via the cloud – essentially doing the job of a mastering house like Deluxe for free.

“In the UK my average cost of delivering a DCP to a cinema is £3.”

Local media interest
With some theatres he’s sold the film on an alternative content basis - scheduling a handful of showings in off peak times.

“If I were a theatre owner the key thing, I would ask any producer is: What’s your local outreach strategy and what resources do you have to put into that? It’s not marketing money. It’s time and sweat. And that’s what really pays off.

“We had a special screening in Orkney that brought in almost 1% of the population on a Tuesday night. Avengers isn’t doing that. It shows that films can have a regional life.”

With the numbers, profile and publicity building, Lewis Simpson thinks his film has reached critical mass to adopt a more conventional distribution arrangement to tackle LA and other regions. LA has the largest native American population in the States.

“In the UK the hard part is having the theatres pay attention to a film that they’ve not heard of. This is what we’ve faced elsewhere but we know that when people hear about the film, a good-sized audience follows.”

One advantage Neither Wolf Nor Dog does is Chief Dave Bald Eagle, who was born in his grandfather’s tepee and left for dead after he parachuted into Normandy on D-Day. He’s been a rodeo rider and race car driver, honoured as the First Chief of the United Indigenous Nations. He passed away in 2016 aged 97. 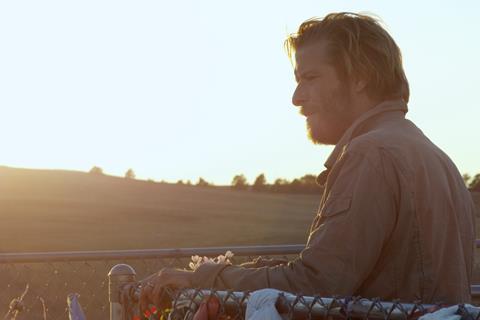 “The majority of our media hasn’t been on the film pages but as a human-interest story,” the director says.

At the poignant climax of Neither Wolf Nor Dog, Bald Eagle improvised dialogue about the Wounded Knee massacre.

“After each take, he said that he’d been holding in those feelings for 95 years. I could never imagine filming anything more important or moving in my career than Dave recounting the Wounded Knee Massacre.”