The diversity chief and former pentathlete who helped the turn the Paralympics into appointment-to-view TV now wants to nail off screen representation. 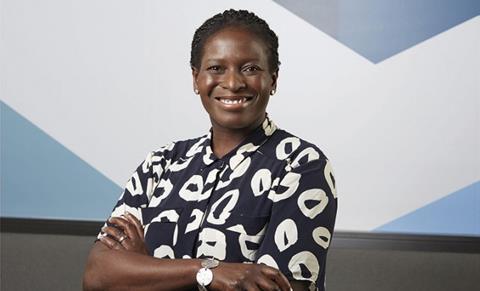 Growing up in a working-class household in the north of England, Ade Rawcliffe gave no thought to a career in television until she was asked to appear on a quiz show while partying in a Manchester nightclub.

“That was the first time I got to see what it was like to work in TV - and I genuinely couldn’t believe that you could get paid to do this,” she recalls.

Providing opportunities for underrepresented groups to appear on and off British TV screens is clearly a role that Rawcliffe was destined for.

Last year she moved over to ITV to become the commercial broadcaster’s diversity head where she is set on making key talent changes to the programme line-up, ensuring that it better reflects the viewing public.

These are all stellar achievements for someone who only planned to stay in a diversity role for a couple of years, after the birth of her second child. “I honestly thought back then that I would have been able to solve the issues within this time frame!” she reflects.

Up until this point, Rawcliffe had worked in production, finding her big break on Stars in their Eyes where she made tea for the fake Shirley Bassey.

As she made the transition to policy in the Channel 4 role twelve years ago, she admits to knowing little about diversity, but the role connected her to the creative side of the industry, where she was able to use her production skills to ensure a diverse range of talent was represented on and off screen.

“We work in a risky business and so people tend to get comfortable with who they’ve worked with before, which doesn’t broaden opportunities”

She is now doing the same at ITV, where she was recently responsible for lining up Citizen Khan creator, actor and comedian Adil Ray as a co-host on Good Morning Britain to replace Piers Morgan.

But do the production teams and independent companies she’s worked with at both broadcasters welcome her suggestions, or view it as unwelcome editorial interference?

“People aren’t consciously discriminatory,” she says. “But I think that we work in a risky business and so people tend to get comfortable with who they’ve worked with before, which doesn’t broaden opportunities. Often it’s about pushing people out of their comfort zones and thinking about what we can do differently.”

Three years ago, Channel 4 launched its 360 Diversity Charter, a major commitment in which the broadcaster pledged to put diversity at the heart of everything it does, both on and off screen. As one of the executives leading this policy, how did she set out implementing significant change?

The biggest challenge, she says, is working out how to bring together a coherent strategy that everyone within the broadcaster can contribute to.

Rawcliffe adds that this is something she had a trial run on, while planning C4’s Paralympic coverage in 2012.

“If you really want to change things you need to get as many people involved as possible,” she says. “What was interesting with the Paralympics was engaging different, less obvious departments that hadn’t been involved in diversity measures before.

“Editorial commissioning teams are an obvious target but we also looked at all other aspects of the business to get them involved including the sales and the marketing teams. From this we were able to devise some groundbreaking marketing campaigns, such as the C4’s Superhumans trail and its [award-winning] Thanks for the Warm Up campaign.”

Channel 4’s Paralympic advertising and its subsequent coverage gave the broadcaster the perfect platform to emphasise that challenging established views was a key part of its remit, shifting public attitudes to disability in general and disabled sports in particular. It’s something that Rawcliffe, a former pentathlete who used to compete against Denise Lewis in her teen years, takes particular pride in.

“What I love about sport is fairness of it all,” she says. “You can’t pretend that you are better than you are.

“The Paralympics was a broadcaster-wide effort though, that wouldn’t have been possible without the conviction of key executives such as Dan Brooke [C4’s marketing chief] and [former disability executive] Alison Walsh,” she adds.

Prime mover
She admits that working for a purely commercially-driven broadcaster is a bigger challenge. “The challenge is greater at ITV but then so are the rewards because the reach is greater,” she says.

Making changes at the heart of a prime-time schedule presents different challenges. “I’ve started by implementing commission commitments - we went through a process where we worked out ITV’s on- and off-screen commitments,” she explains.

“If you really want to drive the agenda you have to change the way that people do things. You have to make it part of the commissioning process and then look at ways that you can you measure this,” she adds.

The thorny issue of how best to measure and publish the results of diversity targets has dominated the agenda in recent years in UK broadcasting.

It follows an industry-wide monitoring system introduced in 2016, Project Diamond, that has come under scrutiny from production unions such as BECTU.

Billed as a ‘one of its kind initiative’ Diamond aims to gather the ethnic details of [anonymous] staff working on new TV productions in a database to see how well the industry is being represented.

Those running the project argue that they don’t yet have enough data sets to release meaningful results, but BECTU wants the project to start publishing the results of individual TV shows, perhaps pressurised by significant anecdotal incidents of discrimination faced by its members.

According to Rawcliffe, the project is bound by the Data Protection Act not to publish information on individual shows, as some productions might only have two people working on them, thus revealing the identity of the form filler.

“What we need is big call to action in the industry for everyone to fill out their forms. The number of people [who have done so] so far is high - but it needs to be higher,” she argues.

She adds: “Diamond is a big ambitious project that no-one in the world has done before, but, as with all these things, the data in itself is not a tool for change.”

Levelling the playing field
If the unions’ response reveals one thing, it is that off-screen talent is pressuring for change. It follows a depressing round of surveys that reveal just how white and male key production roles such as directing and screenwriting still are.

Earlier this year the Writers’ Guild of Great Britain (WGGB) crunched together ten years’ worth of data revealing that only 28% of television drama has been written by women in this time frame, with females accounting for only 16% of prime-time drama credits. An earlier survey by the Directors Guild of America found that 81% of TV directors are white, while only 14% are female.

Rawcliffe is firm that ITV is “working towards” having greater gender quality in terms of writers. “It’s not good enough and we need to get better, there’s no excuse – and how many people are we missing out on?” she asks.

She does think that women need to get better at pushing themselves forward however, and to acquire an unwavering confidence and self-belief that few male counterparts seem to lack.

“Some men pitch ideas to me and I think – ‘I’d never have come here with that!’ We need to get more women round the table and that is exactly what our head of drama [Polly Hill] is doing now,” she says.

While there are more female staff than male at ITV (including CEO Carloyn McCall) Rawcliffe admits that females need to fill more senior roles and more technical roles.

Walking around the halls of predominately male broadcast technology shows instantly reveals the issues that need addressing. Eighteen months ago, ITV’s online commercial director Faz Aftab set up an internal networking group at the broadcaster that enables female technology colleagues across the business to connect, mentor and inspire each other. For her part, Rawcliffe believes that more work still needs to be done to ensure a greater degree of diversity behind the camera.

“We haven’t got there yet, and it needs to start with targeting senior roles – if you look at the current flock of controllers they all look similar – shaking this up could be a real game changer,” she says.