The theme of this year’s NAB was ‘The MET Effect: Media, Entertainment, Technology’, an attempt by the show organisers to throw an overarching net around the rapid convergence of media, entertainment and technology through integrated systems, internet connectivity and interlinking content creation, distribution and consumption experiences.

Nowhere was this ‘MET Effect’ more obvious than at the Avid Connect gathering in Las Vegas where Avid Chairman and Chief Executive Louis Hernandez Jr and Microsoft Cloud and Enterprise Group Executive Vice President Scott Guthrie announced a strategic alliance in which Avid has chosen Microsoft Azure as its preferred cloud hosting platform.

The two companies will now work closely together on cloud-based services for the media and entertainment industries. 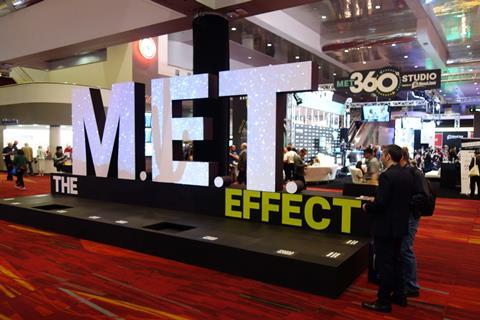 So much convergence was represented by that handshake in Las Vegas.

From the broadcast equipment vendor side, it is an arrival point on a journey that goes back some six years to transition offerings from the hardware-based point products of old to subscription-based, opex-driven, virtualised, cloud-based and IT-centric solutions.

Every major vendor has been promising software-as-a-service and platform-as-a-service solutions to end-users for several years; it feels like 2017 is the year that this really becomes embedded in the DNA of the broadcast technology business.

Avid heads into the cloud and Microsoft gains access to the top-end content creation community across film, music production and television news, drama and sports.

The personal computer operating system giant has in recent years seen social media, search and streaming upstarts like Facebook, Twitter, Google, Amazon and Netflix compete and succeed in the global battle for eyeballs across screens and devices; this strategic alliance with Avid should provide a desired ‘MET Effect’ in terms of production and distribution workflows required to satisfy the ever-changing consumer experience.

I have seen the future at NAB2017 and it has a name: SMPTE ST 2110. This is the proposed open standard for uncompressed interoperable IP production, and it appears to have a clear roadmap for adoption, hopefully in 2017.

Of course the ST 2022-6 IP transport and timing protocol already exists and is in operation in some broadcast facilities and OB trucks.

However, for 2110 the key concept is to split the signals into independent essence, adopting the Video Services Forum’s TR-03 which defines AES67 for uncompressed audio, RFC 4175 for video and SMPTE 2059 for clock synchronisation. 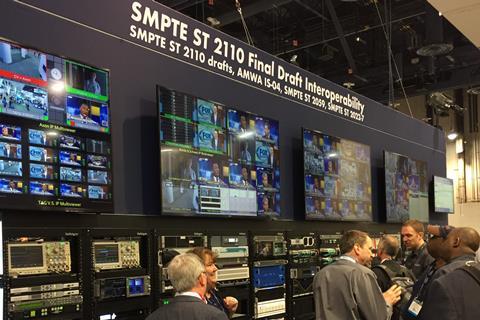 Openness and interoperability are essential for the future of the business and thanks to the patient work of many bodies – primarily the AIMS Alliance for IP Media Solutions – it now appears the industry is in agreement regarding the adoption of SMPTE ST 2110.

But that doesn’t matter too much as long as the current industry agreement and harmonisation pertains, so that facilities that are looking to invest can make solid decisions for the future.

Some facilities – such as BBC Wales, TPC Switzerland and Telemundo USA – have already committed to new installations that will be based on 2110 for uncompressed production.

The eight industry bodies that staged the IP Showcase at NAB – AIMS, AMWA, AES, EBU, IABM, Media Networking Alliance, PILOT, SMPTE and Video Services Forum – are to be be commended for the construction of this unified roadmap to ‘enable a well-equipped and prosperous industry thanks to IP’.

At the show, one industry observer asked me ’who gives a damn about HDR except the vendors?’

It’s a good question, but various developments at the show and discussed in its corridors suggests that 2017 could really be the year for the establishment of High Dynamic Range (HDR) in the television production chain from lens to screen. 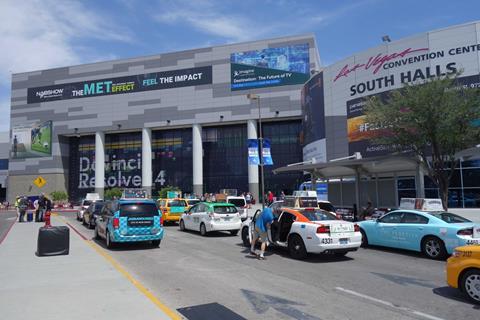 Many believe the visual impact of HDR combined with Ultra HD will provide the real impetus for the widespread consumer adoption of UHD.

It’s true there are different standards for HDR, but the next generation of TV sets to be launched this year in time for the Christmas market will support HDR 10, Dolby Vision and Hybrid Log Gamma.

Some European broadcasters believe that Ultra HD with HDR displays and Dolby Atmos audio provides the ‘killer app’ that will drive the next wave of consumer expenditure and engagement.

Ultra HD has not yet taken a grip among the broadcasting community in the US the way it has in Europe; in fact some American broadcasters are wondering if 1080P HD with HDR is a sufficiently compelling proposition, meaning they would not need to take the step up to Ultra HD.

The debate around 1080P, 4K (and even 8K), HDR and Dolby Atmos will continue through to IBC2017 but I think we will see some significant developments during the summer that will propel HDR from backroom discussions into the spotlight, making it a central industry theme come the IBC Show in September.