Streamer Apple TV+ has bought its first set of sports rights, picking up a package of Major League Baseball (MLB) rights in nine territories including the US, UK and Japan.

The deal will see Apple offer Friday Night Baseball – a weekly doubleheader with live pre- and post-game shows, from the start of the delayed 2022 season which begins at the end of the month. 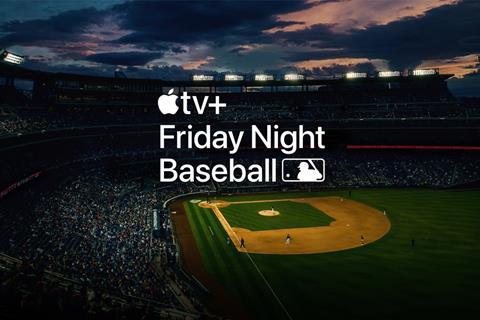 Friday Night Baseball will be available on Apple TV+ in the US, Canada, Australia, Brazil, Japan, Mexico, Puerto Rico, South Korea, and the UK, and will expand to additional countries at a later date.

In addition, Apple TV+ will offer MLB Big Inning, a live show for US viewers featuring highlights and look-ins airing every weeknight during the regular season.

Baseball fans in the US and Canada will also have access to a new 24/7 livestream with MLB game replays, news and analysis, highlights and classic games, as well as on-demand programming, including highlights and MLB-themed original content.

The MLB deal could be the first in a series of broadcast partnerships for Apple TV+, which is reportedly keen on acquiring a package of National Football League (NFL) media properties.

Peter Stern, Vice President of Services at Apple, said: “Baseball has a special place in the heart of so many Apple customers – not just in the United States, but in many countries around the world.”

Noah Garden, MLB’s Chief Revenue Officer, said: “Apple is the ideal partner to bring Friday Night Baseball to fans around the world… With national availability and international reach, MLB on Apple TV+ offers an exciting new platform to fans that allows a wider audience to connect with the game.”