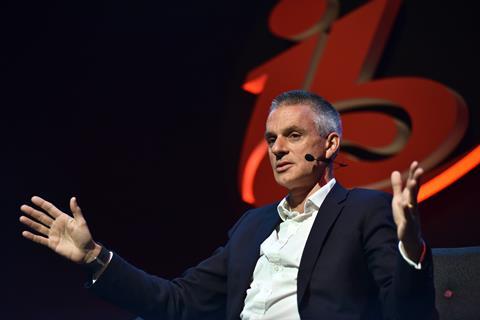 The BBC has named Tim Davie as its new director general, replacing Tony Hall who will step down this summer.

Davie, who is currently chief executive of BBC Studios, formerly served as BBC DG on an interim basis after George Entwistle quit in 2012. It was Hall who ultimately took over the role.

The BBC says his top priorities will include negotiating with the government about the future of the licence fee, which has been put under review by the current Conservative government.

The licence fee, which makes up the vast majority of the BBC budget, is set to stay in place until at least 2027, when the British broadcaster’s current funding deal expires. However, there will be a mid-term funding review in 2020 which Davie will have to oversee.

Davie said: ”I am honoured to be appointed the BBC’s next director general. This has been a critical time for the UK and these past few months have shown just how much the BBC matters to people. Our mission has never been more relevant, important or necessary. I have a deep commitment to content of the highest quality and impartiality.

“Looking forward, we will need to accelerate change so that we serve all our audiences in this fast-moving world. Much great work has been done, but we will continue to reform, make clear choices and stay relevant. I am very confident we can do this because of the amazing teams of people that work at the BBC.”

Davie has been with the BBC since 2005, when he joined as director of its marketing unit from Pepsi. During his 15-year tenure he has held a variety of roles, including director of the audio division, which saw him take responsibility for Radios 1,2,3 and 4.

He was named as head of BBC Worldwide – the broadcaster’s global commercial arm – in 2012 but was soon after appointed as acting DG following Entwistle’s resigned after just 54 days over a scandal involving Newsnight and Tory peer Lord McAlpine.

He returned to BBC Worldwide after Hall became DG, before overseeing its merger with the BBC’s production unit to form BBC Studios in 2018, where he has been CEO ever since.

Davie’s appointment may not come without controversy, however, as there had been a clamour to appoint the first female DG in the BBC’s history, with a number of high-profile names, such as BBC director of content Charlotte Moore and Channel 4 CEO Alex Mahon, linked with the role.

On his appointment, BBC Board chairman David Clementi said: ”Tim has a strong track record as the CEO of BBC Studios and is one of the most respected names in the industry. His leadership and experience, both outside the BBC and within, will ensure that we are well placed to meet the opportunities and challenges of the coming years. Tim has an enthusiasm and energy for reform, while holding dear to the core mission of the BBC.

“We know that the industry is undergoing unprecedented change and the organisation faces significant challenges as well as opportunities. I am confident that Tim is the right person to lead the BBC as it continues to reform and change.”

Davie, who becomes the 17th director general, last year rejected an offer from the Premier League to become its CEO. According to the Guardian, he was selected by the BBC Board out of a shortlist of four candidates, which included Moore, former Wall Street Journal chief executive Will Lewis, and Amazon UK and Ireland’s head of operations Doug Gurr.

Davie spoke at IBC2018 on the need for creative deal making, speed and solid financial backing in order to make sure the broadcasting industry thrives.