TBY2’s opening increases the total number of stages at The Bottle Yard Studios from eight to 11. 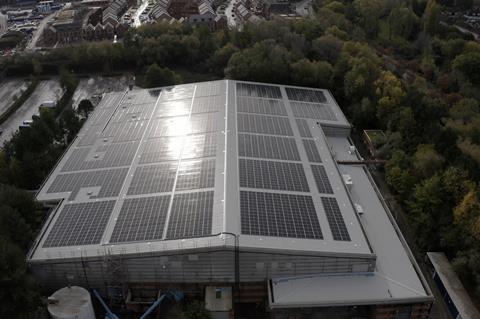 The first booking for the new facility is eight-part saga Rivals, based on the bestselling novel by Jilly Cooper, produced for Disney+ by Happy Prince, part of ITV Studios.

TBY2 has been designed with sustainability in mind. To optimise energy conservation, a building management system controls built-in heating, cooling and ventilation in all stages. TBY2’s roof hosts a gigantic 1MWp solar array consisting of more than 2,000 photovoltaic (PV) panels. Funded by the Bristol Energy Cooperative, it is the biggest community-owned solar rooftop array in the West of England and one of the largest of its kind in the UK, capable of generating the equivalent amount of energy needed to power 250 average Bristol households per year.

Energy produced by TBY2’s solar array will power the studio facility. Over time, surplus energy will be utilised through Bristol City Council’s City Leap Sleeved Pool electricity supply model which connects buildings and ‘sleeves’ surplus energy generated from one building over to another, reducing energy consumption from non-renewables.

Marvin Rees, Mayor of Bristol, says: “The Bottle Yard Studios, our Hollywood in Hengrove, continues to go from strength-to-strength.”

Backed by West of England Combined Authority investment, the £13.5m TBY2 redevelopment has been delivered by construction specialists ISG. It is intended to maintain and grow film and TV production in Bristol and the West of England.

Bristol City Council has invested in renewal and repair works at the main Bottle Yard site.

Owned and run by Bristol City Council, The Bottle Yard Studios opened in 2010 and over the past decade its eight stages have accommodated more than 70 film and TV productions.

Recent credits include The Outlaws (BBC One/Amazon Prime Video), Am I Being Unreasonable? (BBC One), The Last Bus (Netflix) and Chloe (BBC One/Amazon), Showtrial (BBC One) and The Girl Before (BBC One/HBO Max).