CES kicks off with focus on automation and metaverse

CES, the world’s biggest consumer electronics and technology show, is underway as a virtual and in-person event this week.

Many firms, such as Google, Microsoft, IBM, Panasonic, Meta and Amazon, are participating virtually because of concerns about the spread of the Omicron variant.

The three-day event opened on Wednesday, having been shortened from its traditional four days as a safety measure.

Show organiser CTA says there are more than 2,200 exhibitors attending the event in person, slightly up from the 1,800 companies when the event was held online only in January 2021, but a much smaller number compared with before the pandemic.

Highlights of the show so far include innovations in electric transportation and the metaverse.

Sony announced plans to start an electric car company. Back in 2020 Sony revealed it had produced a concept electric car, the Vision-S. This week it launched a follow up – a seven-seater SUV.

Sony said it will establish operating company Sony Mobility Inc. in the spring of 2022 to explore entry into the EV market. It said the new company “will aim to make the best use of AI and robotics technologies. 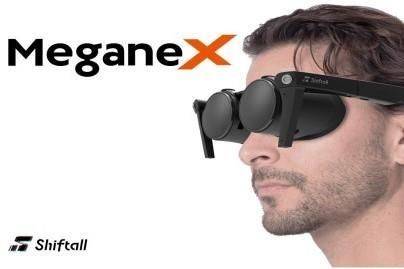 “It is necessary for VR glasses to be lightweight and comfortable to wear as well as deliver life-like images in order to be widely accepted to consumers,” said Takuma Iwasa, CEO of Panasonic subsidiary Shiftall, in a statement.

Sony also announced the follow-up to the original PlayStation VR, called PlayStation VR2, which is designed for the Sony PS5 console. This headset comes with a host of upgrades including a 4K HDR display and an expanded field of view.

Elsewhere, Samsung has launched Freestyle, a portable projector that weighs less than two pounds and is priced at $899, and a line of connected TVs that will support the buying, selling and displaying of NFT art.