The Platinum Stages, named in honour of the Queen’s jubilee year, have recently been completed following a multi-million pound investment in the studios. 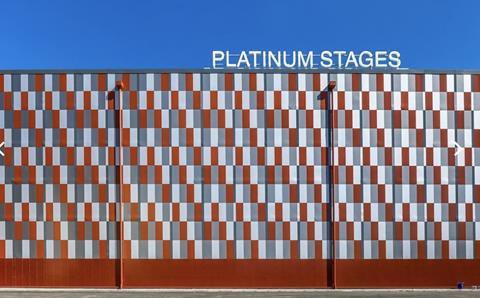 The stages have a combined workable footprint of 3,210 square metres, about half the size of a professional football pitch.

Clad in innovative timber cassettes, the new stages have been designed to meet international space standards in studio design and can be used as two separate stages or a combined super-sized one. Elstree Studios said the stages will create hundreds of new jobs, plus apprenticeship and other learning opportunities.

The stages are a £15.6m project part-funded by Hertsmere Borough Council and the government’s Getting Building Fund via Hertfordshire Local Enterprise Partnership (LEP).

The project was a collaboration between Hertsmere Borough Council, main contractors RG Carter, BAQUS Construction and Property Consultancy, B & K Structures and Rubner.

Elstree Studios is home to series such as The Crown and Strictly Come Dancing.

Chairman of Elstree Studios’ Board of Directors and Leader of Hertsmere Borough Council, Cllr Morris Bright MBE, commented: “I’m delighted to see this construction project completed and excited to see the stages fully operational very soon. The stages are among the best in the industry and keep our studios as a top destination for television and film production in the world.”