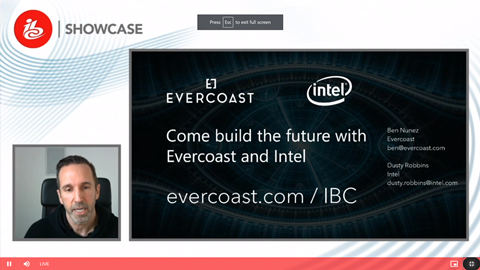 Intel’s director of immersive media Dusty Roberts has said that the firm has been making strides to increase its volumetric capture and delivery capabilities and is working with third parties to optimize both its hardware and software to accelerate the production pipeline.

Speaking during Tuesday’s IBC SHOWCASE session, “Volumetric: Capture, Optimise and Stream”, Roberts said that the goal was to “enable end-to-end live and VOD volumetric streaming over today’s and tomorrow’s networks.”

He added that in terms of capture, Intel has been improving its Real Sense Depth cameras, which he promised, would move the camera on from merely capturing content and towards “processing and eventually streaming it.”

Acknowledging the latency and bandwidth issues that still challenge today’s immersive and volumetric workflows, he added that these could only be tackled through collaboration with other partners.

He added that Intel is opening up elements of its transcode, rendering and encoding software via the Visual Cloud to the developer community to “accelerate the usage of volumetric content” and it was also removing “impediments from hardware” too.

“You really have to think, as you increase your capabilities, how can you do it every step of the way. That’s why partnerships are so important to us,” he said.

One such partnership has been with Evercoast – a New York based outfit producing 3D holographic, volumetric content for AR, VR, and mobile.

Evercoast’s recent work has included a live, four-and-a half minute segment for the opera Tosca, which involved capturing a volumetric image of bass baritone Kyle Albertson and rendering his full 3D image in an Unreal gaming engine - complete with VFX - and broadcasting it live, at the end of act one.

The company has built its own end-to-end volumetric pipeline and owner Ben Nunez - who joined Roberts in the session - said that it had taken him “years” to build a scalable system that comprises entirely of off-the-shelf, low cost software.

“And we built all of this on top on a powerful API and coupled it with developer tools for game engines,” he added.

From a bandwidth point-of-view, Roberts stressed that 5G was key to volumetric content’s growth. “We generate an enormous amount of data and moving that data around at scale is more challenging on slower networks,” he added.

While there are still network issues to overcome, Roberts likened volumetric content pioneers to video broadcasters in the early 2000s, plagued with rights and bandwidth hurdles until speeds picked up and YouTube came along: “Those who jumped in at the beginning flourished,” he added.