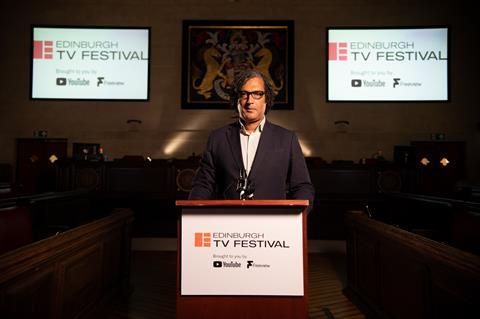 David Olusoga: Sees himself as a survivor of the industry, not a success story

Historian, broadcaster and writer David Olusoga has warned the TV industry to share power with a marginalised Black, Asian, and minority ethnic community or risk losing the entire next generation of viewers, and face obscurity.

In a powerful Edinburgh TV Festival MacTaggart – delivered digitally from Bristol City Hall -  Olusoga reflected on his 20 years in the industry which has provided success ‘making TV and telling stories – the best job in the world’ but one that he said has also caused him great despair, depression and resulted in him almost leaving the industry altogether.

“I have been given amazing opportunities, but I’ve also been patronised and marginalised. I’ve been in high demand, but I’ve also been on the scrap heap. I’ve felt inspired, and convinced that our job - making TV and telling stories - is the best job in the world.

“But at other times I’ve been so crushed by my experiences, so isolated and disempowered by the culture that exists within our industry, that I have had to seek medical treatment for clinical depression. I’ve come close to leaving this industry on several occasions. And I know many black and brown people who have similar stories to tell.”

In the lecture Olusoga shared stories and experiences of what it is to be a person of colour in a predominantly white industry; the disparity of the audience demographics compared to those who make and commission the shows; and how marginalisation is leading to people of colour leaving the industry, losing vital talent and voices.

“For as long as I’ve been in this industry we collectively have been aware that the people who make and commission the UK’s television programmes do not look like the population at large - our audience.”

He referred to a 2016 Directors UK study which reported that just 2.22% of TV programmes were made by B.A.M.E. directors, and that just 3.6% of directors on their dataset were B.A.M.E. That means, said Olusoga, that “even though the industry has long claimed to be crying out for black producers and directors, many of those already in the industry were then not getting work.”

Olusoga said the industry is so used to this state of affairs that it struggles to imagine what proper representation would look like. “If you were to walk on to a filming location in London and 36 per cent - more than a third - of the cast and crew were black or brown, you really would notice it. It really would feel unusual. And yet all that would represent, for a London production, is a proper reflection of the ethnic make-up of that city’s workforce. But of course none of us have had that experience because that never happens.

“Ask Steve McQueen, who in June said that although the lack of inclusion of people of colour in TV is undeniable and undeniably wrong, ‘many people in the industry’ he said ‘go along with it as if it is normal’ when in reality ’It’s blatant racism.’”

Olusoga described himself as a survivor of the TV industry, rather than a success story: “I am one of the last men standing of TV’s lost generation. The generation of black and brown people who entered this industry fifteen, twenty, twenty-five years ago with high hopes. I’m a survivor of a culture within TV that failed that generation. I’m here because a handful of people used their power and their privilege to help me.”

Olusoga said there is a” brutal answer” to the question why is there a lack of black controllers, black company owners and black commissioners. “That answer is that we had them - and we lost them. They left because our industry failed to support their careers and nurture their talents. They left because they never got the next contract, because they no one championed them or help plan their careers. Some are running Indies, some have left TV altogether.

“They left because even when they got work their voices were too often not listened to, their stories too often were not of interest to the taste makers and programme pickers who, over the same period, grew ever more powerful within the structure of TV. They’re not here now because we didn’t have the will to keep them and - worn out by it all - they gave up on our industry.”

He noted that the murder of George Floyd and the Black Lives Matter protests had caused a wave of introspection and action in the TV industry. “The UK broadcasters have responded to Black Lives Matter with new initiatives. Vast sums - we are assured - have been pledged or ring fenced. Improvements are promised in diversity in the of production staff, senior management and commissioning, and new programmes have been commissioned. So much has been promised that there is reason to hope that this really is a moment of change for our industry. Rather than a false dawn - and we have had a number of those.”

Olusoga, 50, is best known for his TV series and documentaries including A House Through Time, Black and British: A Forgotten History, and the BAFTA-winning Britain’s Forgotten Slave Owners. He is also Professor of Public History at the University of Manchester, and a best-selling author.