Nvidia has used its GTC Spring Conference to unveil Omniverse Cloud, a suite of cloud services that gives artists, creators, designers and developers instant access to the Nvidia Omniverse platform for 3D design collaboration and simulation from any device, anywhere.

Among Omniverse Cloud’s services is Nucleus Cloud, a one-click-to-collaborate sharing tool that enables artists to access and edit large 3D scenes from anywhere, without having to transfer massive datasets. It also includes Omniverse Create, an app for technical designers, artists and creators to interactively build 3D worlds in real time; and View, an app for non-technical users to view Omniverse scenes streaming full simulation and rendering capabilities using the Nvidia GeForce Now platform, powered by Nvidia RTXTM GPUs in the cloud. This means whether users are on a Chromebook, Mac, tablet or any other device that connects to GeForce Now, they’ll be able to stream, create, view and collaborate with other Omniverse customers. 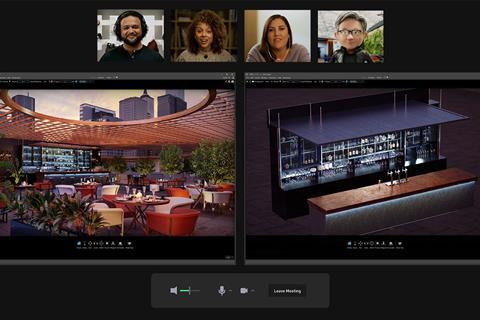 “We believe that virtual worlds are going to be required for the next era of AI,” said Richard Kerris, Vice President, Omniverse Platform at Nvidia. “What I mean by that is whether you’re using synthetic data generation for robotic training or autonomous driving or digital twins, there’s many, many different use cases for these virtual worlds. We believe it’s going to be essential for this next generation of the web.”

“A new wave of work is coming that can only be done in virtual worlds,” agreed Jensen Huang, founder and CEO of Nvidia. “Omniverse Cloud will connect tens of millions of designers and creators, and billions of future AIs and robotic systems.”

Using Omniverse Cloud, creators can iterate, share and collaborate on models stored in Nucleus Cloud from anywhere, and instantly invite other collaborators to join a session by sending a link. Users or teams without high-end GeForce or Nvidia RTX systems — or the desire to stand up IT infrastructure – can take advantage of the full powers of Omniverse Create and View by subscribing to the Omniverse Cloud programme.

In his keynote address at Nvidia GTC, Huang showed a demo of the future of design featuring three human designers and one specialist Omniverse Avatar AI designer collaborating virtually in Omniverse Cloud, making design changes to an architectural project.

The team conversed using a standard web conferencing tool, while connected in a scene hosted in Nucleus Cloud. One human designer ran the Omniverse View app on their RTX-powered workstation, while the other two streamed Omniverse View from GeForce Now to their laptop and tablet.