Plans to expand Pinewood Studios have been agreed by local councillors.

The proposed development for the Buckinghamshire site includes more sound stages, a skills and training hub to be operated by the National Film and Television School, a business growth hub and a major film inspired visitor attraction. 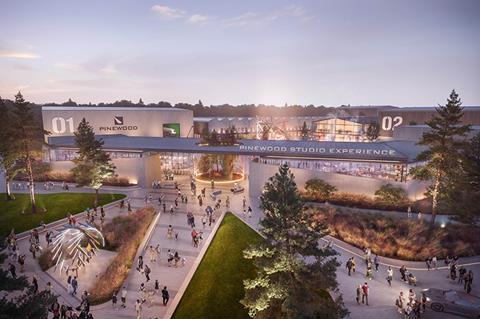 Pinewood said the development will expand the facility, increasing capacity for film production in the UK as well as offering an international visitor attraction.

Pinewood said that the development project will result in a £355 million boost to the UK economy and create over 3,500 jobs if given final approval.

Paul Golding, Chairman of Pinewood Group, said: “We are delighted by this outcome. The decision allows us to continue our ongoing investment in the Studios and support for the UK film and television industries.  Importantly, we now have the opportunity of creating a world-class training centre and film inspired visitor attraction, bringing considerable benefits to the community of Buckinghamshire and the UK economy.”

The decision will be welcomed by the UK film and TV industry, which is experiencing buoyant levels of production which has caused a shortage in available studio space. A number of new studios are already in the works to help meet demand – including Sky Studios Elstree; Eastbrook Studios in Dagenham; Shinfield Studios near Reading; Mercian Studios in Birmingham; Sunset Studios in Broxbourne, Hertfordshire; and Littlewoods Studios in Liverpool.

However, the Pinewood expansion has proved contentious locally. Buckinghamshire councillors agreed the plans before Christmas after a debate that lasted for nearly four hours which included emotive pleas to refuse the application.

The BuckinghamshireLive website reported that Councillor Wendy Matthews said the loss of the greenbelt area will have a “profound impact on the area”.

“The parish of Iver is losing 25 per cent of its greenbelt and yet the cumulative effect is not considered in the officers’ report,” she said.

“Once it’s lost, it is gone forever. If this development goes ahead the village will be largely surrounded by Pinewood’s huge warehouse buildings sitting in the greenbelt.

“These totally dominate the area and no amount of landscaping or coloured cladding will disguise them turning the village into a residential area in an industrial site.”