Shinfield Studios has received full planning permission from Wokingham Borough Council to begin construction on an 18-sound stage studio facility near Reading in the UK.

The 85,000 square metre studio complex, part of studio operator Blackhall Global Partners, will be located in Shinfield, Berkshire within the Thames Valley Science Park, becoming one of the largest film and TV studios in the UK. 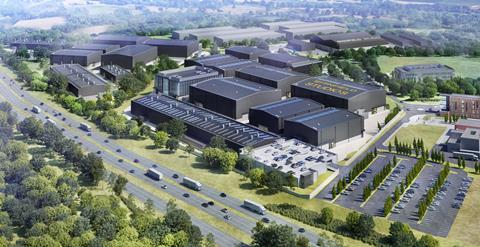 The facility will include four sound stages which have already been completed, following accelerated planning permission. They are now ready for operation, with a Disney production confirmed to start in 2022.

Alongside 18 stages, Shinfield Studios will include workshops, offices and a post-production and screening facility for film and television productions. In addition, facilities will be completed for the use of related service businesses including lighting, camera and props.

Several purpose-built studios complexes are set to open in the coming years to tap into booming levels of production in the UK. Sky Studios Elstree is to open to productions next year, while Eastbrook Studios in Dagenham is targeting 2023. Other new studios in the works include Mercian Studios in Birmingham Sunset Studios in Broxbourne, Hertfordshire; and Littlewoods Studios in Liverpool.

In October, members of Wokingham Borough Council’s Planning Committee voted unanimously to award planning permission to Shinfield Studios’ proposal. Following receipt of confirmation of no objection to the permission from Michael Gove, the Secretary of State for Levelling Up, Housing & Communities, full planning consent has now been granted.

Alongside the four sound stages already constructed, a further nine are due to open in 2023, with completion of the entire 18 stage facility by the end of 2024.

Shinfield Studios says it is being designed to embrace sustainable production and practices. The studios will use air source heat pumps and photovoltaic arrays (PV), and the site will not be using any natural gas.

In addition to Shinfield Studios, Blackhall Global Partners owns Blackhall Studios in Atlanta, America. The nine-stage, 850,000 square foot studio campus opened in 2017 and plans are in place to expand the site by nearly 1.2 million square feet by 2024.

Additionally, Blackhall Global Partners is developing in the Los Angeles metro with a new 19-stage facility in Santa Clarita which is expected to open in 2025

Nick Smith, joint managing director of Shinfield Studios said: “We are incredibly excited about the potential for Shinfield Studios, both as a significant contributor to the thriving UK film and TV industry and for its already proven ability to attract the world’s foremost story tellers and producers. Our goal has been to move rapidly to support our clients who need to secure space from next year. Completing the first four sound stages already has enabled us to get up and running quickly and deliver a state-of-the-art studio space to meet Disney’s needs.”

Adrian Wootton OBE, chief executive of the British Film Commission, said: “The UK has never been more attractive as a film and high-end TV production base. Indeed, the demand for filmed content continues to grow exponentially, so it is critical that we respond by supporting an increase in studios and stage space capacity, in tandem with significant skills development. Shinfield is an important new development, which will help considerably in continuing to draw production and investment to the UK.”

Alan Howard, co-principal shareholder of Blackhall Global Partners added: “The UK enjoys a strong reputation for creative excellence and it is incredibly rewarding to be in a position to contribute to the continued growth of the TV & Film sector with the establishment of Shinfield Studios.”