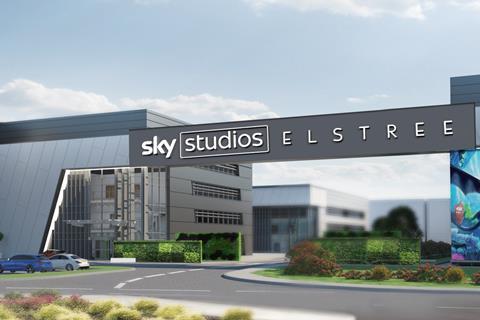 Sky Studios Elstree gets the go ahead: Artists Impression

Sky has received planning permission to proceed with construction works at Sky Studios Elstree, its new film and TV studio in north London.

The approval came in the same week that councillors in east London approved plans for new film studios with six sound stages on a former factory site in Dagenham.

The final design for Sky Studios Elstree sees 12 sound stages on site, with the ability to merge together and sub-divide multiple sound stages simultaneously, allowing it to accommodate productions of different sizes.

The biggest sound stages on site can now increase to cover 60,000 sq ft if needed or reduce to much smaller segregated studios, providing a COVID-19-ready set up for the future.

The production facilities and digital suites on site will also be set up to facilitate remote working.

The total area of the site will cover the equivalent of 17 football pitches. Sky’s new facility will join the existing Elstree Studios and BBC Elstree, creating a mega production hub in the area.

Investment for the Studios comes from Sky’s owner Comcast and in partnership with sister-company NBCUniversal. Legal & General will be financing and developing the scheme, which is located in the borough of Hertsmere, north of London.

Once operational, the studios will provide much needed space for the ongoing boom in film and TV production in the UK.

Sky says the studios will create over 2,000 jobs in the local area, including 900 during the construction phase and 1,500 once the studio is operational. The full-time roles will include a significant number of production jobs alongside roles supporting the running of the studio’s operations.

Sky says it expects that Sky Studios Elstree will become the most sustainable film and TV production site in the world when it opens in 2022.

The project is set to use reduced embodied carbon in construction. It is expected that Sky Studios Elstree will have the capability to generate 20% of its own energy on site through solar energy. No gas or fossil fuels will be used to power day-to-day operations and Sky will also harvest rainwater for use on site.

Sky Studios will not allow any single-use plastics in Sky operations and has planned for how cast and crew will use the studio on a day-to-day basis, including green spaces and landscaping across the site.

Caroline Cooper, chief financial officer, Sky Studios, said: “Alongside our colleagues at NBCUniversal and our partners at Legal & General, we will create a world-leading production studio that will turbocharge Sky Studios’ plans to create even more award-winning Sky Originals for our customers.”

Meanwhile, the Dagenham studio plans were voted through unanimously by members of Barking and Dagenham Council’s planning committee on Monday night.

It came nine months after the project’s original backer, Pacifica Ventures, pulled out over concerns about Brexit.

The council vowed to press on alone and its investment arm Be First is still in talks with potential joint venture partners. It has released £3.4m to cover pre-development costs.