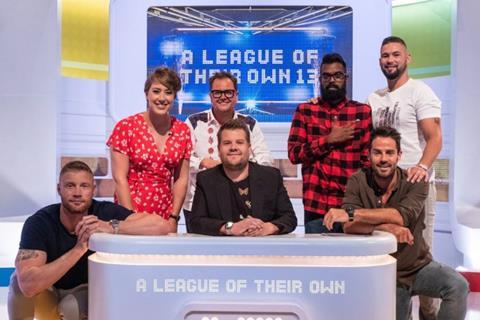 A League of Their Own: Set to record at Elstree Studios hub

In a sign that entertainment production is getting back on track following coronavirus shutdowns, BBC Studioworks reports that a host of shows are now shooting across its studio facilities.

The third series of There’s Something About Movies is currently being recorded in Studio TC1 at Television Centre. The joint production between CPL Productions and Motion Content Group for Sky One sees Alan Carr return as host with Jennifer Saunders and Michael Sheen also returning as team captains.

Over at its Elstree Studios hub, BBC Studioworks is gearing up to begin the recording of the 15th series of A League of Their Own in George Lucas Stage 2. Also a CPL Productions show for Sky One, the programme features regulars Jamie Redknapp, Freddie Flintoff and Romesh Ranganathan.

Both shows are returning without a live audience for the first time.

The shows are running alongside a schedule of Good Morning Britain, This Morning, Loose Women, Peston, The Martin Lewis Money Show and Sunday Brunch at BBC Studioworks’ Television Centre facility.

Meryl McLaren, commercial manager at BBC Studioworks, said: “Remaining operational throughout the peak of the pandemic really helped us hone our health and safety protocols and work with our clients on perfecting the best solutions. We continue to discover innovative ways of working and pushing the boundaries of facilitating entertaining TV.”