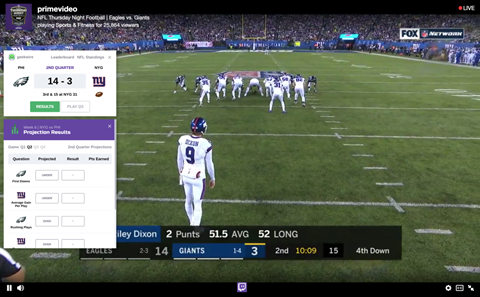 Amazon-owned video game streaming service Twitch is to step up its focus on sports with the launch of a standalone sports category.

As part of the launch, twitch.tv/twitchsports will be brought back to serve as a channel featuring different sports events being streamed on Twitch.

A Sports category will also be added in the Browse section, giving viewers a single central location to discover live sports on the platform.

Previously, many channels presenting live sports had been using other categories for their broadcasts, including Fitness & Health.

As part of the launch of the new sports category, Twitch also announced this week that it is collaborating with four football clubs - Real Madrid, Arsenal, Juventus and Paris Saint-Germain - to provide exclusive content on the platform.

Initially, Twitch will collaborate with each club on producing behind-the-scenes content, with the potential to cover live youth and first-team friendly matches on the platform, as well as club press conferences.

Twitch already has official pages established for many sports teams and leagues, including the NBA, NFL, and UFC.

Many use it as a platform to showcase and create content around the video game versions of their respective sports, although the NBA has recently shown reruns, including a Top Ten Games of the Season series.

Last month, Amazon announced it would live stream for free four matches from the Premier League on the Twitch platform in the UK, following news about the restart of the football season post coronavirus.

Amazon’s coverage of the NFL’s Thursday Night Football has also been shown on the platform, Twitch has also struck a deal with the Rugby Football League (RFL) in England.

Twitch’s young audience profile is seen as a key attraction for many potential sports partners looking to work with the platform.

Twitch grew in popularity as a platform for video games and eSports content but its success has seen many athletes and sports organisations embrace the site.

The company claims to have 175 million average daily viewers, with an average of 1.5 million watching at any given moment.