After receiving requests from several high-density customers, Deltacast has worked on a new I/O card hardware layout raising the number of video channels to 12 without impacting size, complexity, power consumption or heat dissipation. 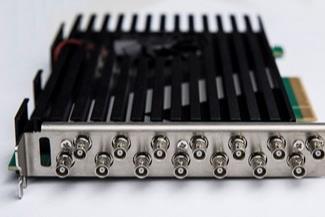 Deltacast: The DELTA-12G-e-h 2i1c I/O card is the first available with the new layout

Still condensed to a standard height, shorter than half-length, PCI Express form factor and concentrating all its data traffic on a PCIe Gen 3 x 8 interface to maximise platform interoperability, the new interface card hosts 12 SDI ports plus an analogue reference (genlock/LTC) input and an analogue genlock loop/output on its standard-height bracket.

The 12 SDI ports fully support 3G-SDI operation, and three of them are upgraded to 6G and 12G-SDI.

The DELTA-12G-e-h 2i1c is the first available configuration on this new hardware layout.

This product features eight fixed input channels, with two of them being 12G-SDI, and four channels that can be freely used as input or output – one of which is 12G-SDI.

That mix of inputs and configurable channels, as well as of HD (3G-SDI) and UHD/4K (12G-SDI) channels, makes the DELTA-12G-e-h 2i1c suitable for many applications, such as multi-camera systems (analysis, compliance recording, video encoding, media servers), high-density production and replay video servers, multiviewers and video switchers.

Moreover, this new I/O board allows users to port a product from HD to UHD even in multi-link 3G-SDI transport while keeping a low design complexity, low power consumption and a cost-effective solution, relying on a single interface card.

Integrating existing applications with this new interface card is also said to be straightforward, thanks to the VideoMaster SDK offering a unified programming interface for all Deltacast SDI products.

VideoMaster 6.16 introduces official support for this new card, which is equipped with a feature pack similar to the other Deltacast SDI products.