Icareus has delivered a renewed Helsinki Channel service to the City of Helsinki in Finland. The Helsinki Channel is the city’s video communication channel and offers important and current content to residents. 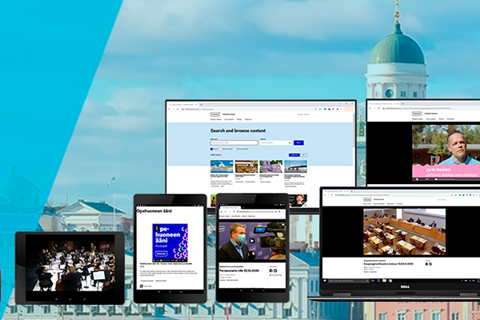 The technology platform of the channel is the Icareus Suite video cloud service.

The Helsinki Channel offers online broadcasts and publishes recordings of Helsinki City Council meetings, concerts by the Helsinki City Orchestra and the mayor’s residents’ evenings. The channel also publishes the citizens’ own Urban Videos content. Most of the content is viewable by everyone. In addition to public content, the City of Helsinki publishes videos whose visibility is limited to the city’s staff.

At the beginning of 2020, Icareus delivered a renewed Helsinki Channel video platform and responsive website. With the Covid pandemic, the viewing of videos on the Helsinki Channel has increased and individual live broadcasts, such as the Mayor’s information videos and the concerts of the Helsinki City Orchestra, have received thousands of viewers. The May Day concert, organised by the City of Helsinki, reached around d 130,000 live and recorded viewers through the Helsinki Channel.

Requirements for delivery of the channel included support for live streaming on multiple simultaneous channels to thousands of viewers, automatic recordings of live broadcasts, easy video archive management, support for subtitles, integrations with social media services such as YouTube, series and podcasts, watching videos and listening to podcasts from all major browsers, adaptive video content distribution and its geographical restriction, integration into the Helsinki City Council’s Data Pump system, and easy tools and interfaces for adding and sharing videos to different websites. Naturally, the public user interface had to be customisable to match the visual look of the City of Helsinki.

Icareus CEO Toni Leiponen commented on the delivery: “We are proud and happy that Icareus was chosen to implement and deliver the City of Helsinki’s video service, which serves as a leader in the quality and scope of video communications for all Finnish municipalities. Our Icareus Suite service perfectly adapted to the needs of the City of Helsinki and proved its versatility as a leading video cloud solution.”