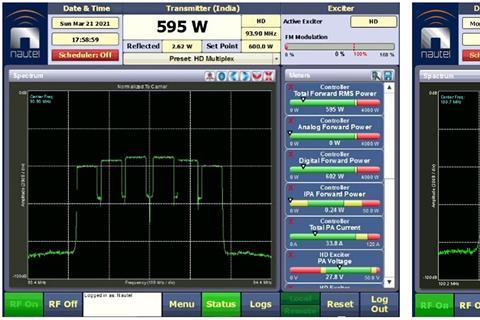 Nautel: Tests have demonstrated the viability of operating up to six separate digital channels from one transmitter

All India Radio, operated by Prasar Bharati, has been testing methods of broadcasting multiple digital signals from a single FM transmitter in order to provide a wider range of services. Both DRM and HD radio standards are being evaluated; in both cases Nautel’s proprietary digital multiplexing technology has been instrumental in demonstrating the full potential of digital transmission.

The tests conducted by Prasar Bharati have successfully demonstrated the viability of operating up to six separate digital channels from one transmitter, each of which carries multiple HD radio or DRM services. Each channel can be operated independently, allowing several broadcasters to use the same transmitter while maintaining control over their content and distribution.

“The concept of digital multiplexing is an ideal solution for nationwide rollouts of digital broadcasting, especially in applications where multilingual services are required,” said Schmid. He noted that this technology is applicable to single-frequency networks, with some of the content remaining local or regional while other channels are sent nationwide.

Nautel had previously played a key role in the implementation of digital MW broadcasting across India; 33 high-power NX Series transmitters now cover most of the country’s population with a DRM signal. “We are pleased to have been a part of India’s revolutionary rollout of digital broadcasting and are excited about their next steps in bringing digital FM radio to listeners across the country,” said Kevin Rodgers, Nautel president and CEO. “The digital multiplexing technology developed by Nautel engineers makes it possible to easily transition from analogue broadcasting to hybrid analogue-digital to fully digital, all using the same transmitter and receivers. It’s a great way of moving digital radio forward worldwide.”