NHK will present highly realistic broadcasts of the 2020 Olympic Games in Tokyo via 8K Super Hi-Vision, the world’s most sophisticated broadcasting system.

Here, we describe our preparations for 8K broadcasting, particularly for the test broadcasting via satellite due to start in 2016.

In particular, we describe our activities related to standardization and development of program production equipment, play-out, and a distribution system for the 8K broadcasting.

Regarding the production and distribution systems, we present the results of experimental satellite broadcasting performed this year.

We also discuss the current status of the high dynamic range (HDR) function for the 8K system, the multi-format production workflow, and remaining issues.

8K Super Hi-Vision (UHDTV) is a broadcasting medium featuring 16 times the number of pixels as Hi-Vision (HDTV) and 22.2 multichannel sound to provide a highly realistic “you are there” sensation.

Since 1995, NHK has been researching and developing UHDTV as a next-generation broadcasting system to succeed HDTV and has been active in specification studies, equipment/device development, and technology standardization.

In 2012, NHK’s specifications for the UHDTV video signal was approved as an international standard by the International Telecommunication Union (ITU) 1) and 8K public viewings of the London Olympic Games were successfully held in Japan, the United Kingdom, and the United States.

Now UHDTV has made a transition from the research and development stage to the implementation and promotion stage.

The formulation of a roadmap toward early adoption of UHDTV (4K/8K) broadcasting has been progressing since 2012, with the Ministry of Internal Affairs and Communications (MIC) being the center of this effort.

In September 2014, an interim report announced the goal of “beginning 4K/8K test broadcasting using Broadcasting Satellites (BS) in 2016 and launching 4K/8K commercial broadcasts by BS and other means by 2018 or earlier if possible.”

In parallel with these activities, the Next Generation Television & Broadcasting Promotion Forum (NexTV-F) 3) was established, with participants including broadcasters, manufacturers of receiving equipment, and telecom companies, as an “All Japan” promotional body for UHDTV.

NHK aims to commence test broadcasting in 2016, and to this end, it is developing and preparing UHDTV facilities and equipment covering a range of functions from content  production to play-out, transmission, and reception. This paper describes the present state of development activities and preparations for the test broadcasting.

The roadmap for 4K/8K broadcasting that appeared in “The Interim Report of the Follow- up Meeting on 4K and 8K Roadmap” of August 2014 is shown in Figure 1. 4)

NHK is making preparations in line with this roadmap. 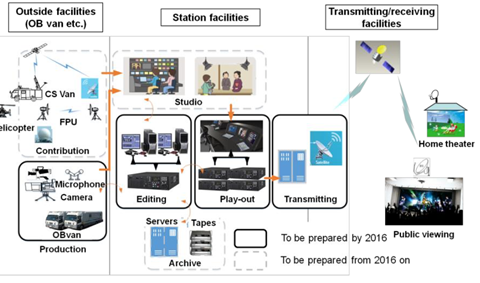 It is also developing prototype receivers to enable viewing of test broadcasts.

Testing of the technology in the field-transmission and studio facilities has already begun. The plan is to prepare these facilities in so that they will eventually be capable of broadcasting.