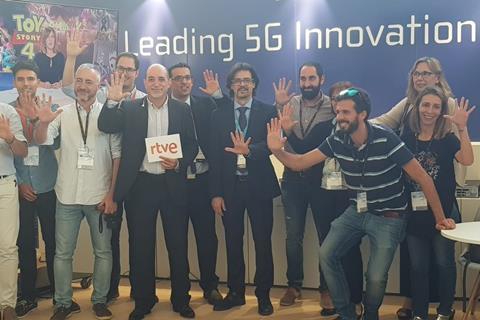 RTVE has become the first Spanish broadcaster to carry out a live broadcast over 5G connectivity.

The Spanish state broadcaster carried out the 5G broadcast during the EUCNC 2019 conference in Valencia, where news presenter Ana Blanco spoke to reporter Carlos de la Morena who was on-site in the Spanish city.

EUCNC was also home to the 7th Global 5G event. The broadcaster used an HD camera linked to a 5G NR station to carry out the standalone live transmission, which RTVE claims is the first of its kind. This is because previous 5G broadcasts have been based on non-stand-alone 5G technology, which requires a 4G network for control and signalling information.

De la Morena made his broadcast from in front of a TV screen in order to highlight the superfast speed and low latency of the new 5G network.

The 5G trial saw a pre-commercial 5G ecosystem activated from the client terminal to service platforms during the Moche XL Esports, the biggest event of its kind in the region.

Portugal has yet to launch 5G, so Altice sought a provisional licence from regulator Anacom to carry out the trial, which took place at the Altice Arena.

It comes as the race to demonstrate new 5G use cases heats up across Europe.

Spain recently entered the 5G leadership race in Europe with Vodafone Espana switching on its 5G network in 15 cities across the country, becoming the first Spanish operator to offer 5G. It also beat Vodafone UK to the title of first Vodafone op-co to offer 5G services.

The UK saw its first commercial 5G launch last month, after BT-owned mobile operator EE switched on its 5G network. The same day, the BBC carried out its first 5G broadcast over the EE network, although it did encounter some problems with the nascent technology.