Tapping into the power of blockchain

From empowering artists to track their IP to allowing studios see how their movies are performing, blockchain is set to revolutionise the way content is monetised and distributed according to Singular DTV co-founder Kim Jackson. 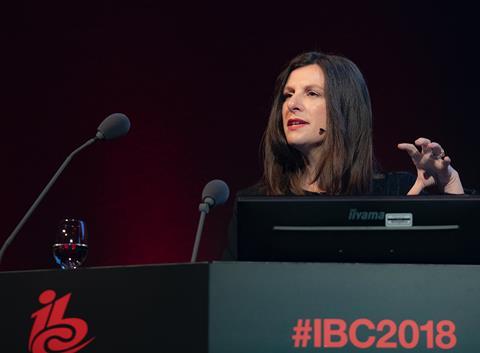 During Friday morning’s Blockchain Keynote, Jackson revealed that next year her company is set to launch an ecosystem based around the digital ledger technology that enables its users to generate smart contracts and tokens that can be embedded with IP, rights information and value.

“The ability to track IP and revenue is where the power is,” said Jackson. “Singular DTV is focussed on transactions: rights, royalty and revenues. Next year you are going to see films, TV shows and books using our digital distribution platform.”

Singular’s platform comprises of Tokit, which allows creators to upload and tokenise content; a consumer facing peer-to-peer distribution platform; and an artist’s portal where creators are able to see what transactions are taking place in each region in real time.

Jackson said the platform could be used to go direct to consumer or to help studios and digital streamers track revenues from their content.

“Our tech can really help studios with their accounting processes, which can be a costly inefficient nightmare. They can just use the backend of what we offer and save millions of dollars,” Jackson claimed.

Jackson is such a die hard convert to digital ledger technology that she even got married on the blockchain, securing her vows in a smart contract on the platform.

Other cheerleaders for the DLT technology include film maker and Bill and Ted actor Alex Winter, who has made a documentary film for DTV, Trust Machine: The Story of Blockchain; and High School Musical producer Bill Borden, who has praised blockchain for its “transparent accounting abilities”.

Maurice Schutte producer and co creator of the sci-fi feature Space Beers told delegates that he was planning to use STV’s platform to tokenise the film as a means of getting it made and rewarding stakeholders and fans who have contributed to the project.

“We strongly believe that all financial supporters of Space Beers should reap the benefits. Traditional crowdfunding just doesn’t offer backers the sustainable or lucrative participatory structures that tokenis6ed ecosystems can,” he said.