For perhaps the first time ever, Wi-Fi technology has the chance to realise its full potential, but it will take new and complementary technologies to help make it happen.

Wi-Fi is an enabling technology that has changed the way we work, relax and communicate. Since its introduction 20 years ago, it has coexisted with other wireless technologies, creating a suboptimal radio frequency environment.

The Federal Communications Commission (FCC) of the United States issued a Notice of Proposed Rulemaking (NPRM) for unlicensed use of the 6GHz band in December 2018.

The new rules open up a maximum of 1.2GHz of spectrum between 5.925GHz to 7.125GHz for new opportunities. The newly released spectrum has the potential to offer over twice the spectrum currently available in 2.4GHz and 5GHz, thanks to the increased number of 160MHz channels.

Compared to the 20, 40, 80 and limited number of 160MHz channels available in Wi-Fi operating in the 2.4 GHz and 5 GHz bands, these additional and wider channels will not only enable very high-speed transfers in the region of 10Gbps, but they will also support more users in dense environments, such as Multi-Dwelling Units (MDUs).

Currently, the FCC is evaluating various rules for unlicensed 6GHz operation including some that require the use of AFC (Automated Frequency Control), and a centralised 3rd party database administrator.

The industry expects the FCC to finalise 6GHz unlicensed operation by the end of 2020, while other countries in the European Union and in Asia will follow suit with their own adoption of 6GHz, most likely in 2022.

As key enterprise OEM points out, this will be the first time in 17 years that Wi-Fi technology has received additional airspace.

The introduction of 6GHz is most certainly an exciting development for the industry. What is less certain is when Wi-Fi 6 (802.11ax) devices with 6GHz support will be available; looking back at the adoption of Wi-Fi 5 (802.11ac) technology indicates it could be several years. 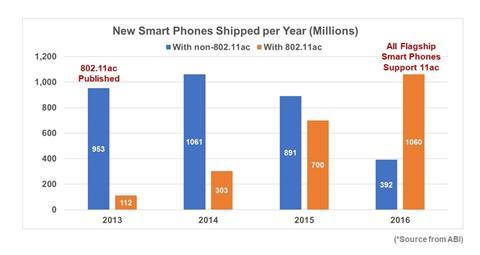 If we apply this model to the adoption of Wi-Fi 6 6GHz, it could also take approximately 3 years before we see mass adoption. Assuming the IEEE 802.11ax specifications are published in June 2020, that projection would see over 1 billion new Wi-Fi 6 6GHz clients shipped by the middle of 2023. However, with 6GHz regulatory approval not expected before the end of 2020, this timeline will most likely be extended to the end of 2023; three years after the FCC fully legalises 6GHz operation.

With these expectations for 6GHz roll-out it might be reasonable to assume that next-generation Wi-Fi 6 infrastructure devices that are brought to market in 2020, such as home gateways and access points, will all be designed around an architecture that supports a fixed 4x4 radio for each of the 3 bands: 2.4GHz, 5GHz and 6GHz (Figure 2). 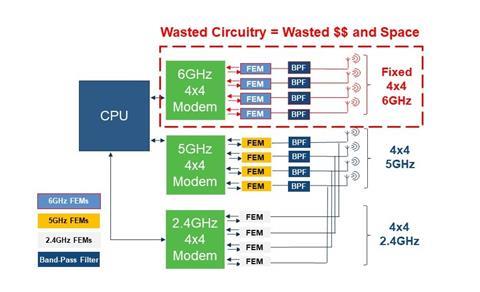 Although there are already Wi-Fi 6 access points appearing on the market, as previously stated we can only expect the mass appearance of 6GHz Wi-Fi 6 clients towards the end of 2023, so it is likely that circuitry dedicated to 6GHz in any gateway solution that is introduced before 2023 could remain unused for a significant amount of time. This basically means the power, cost and space dedicated to the new 6GHz components inside the gateway will be wasted.

However, service providers really have no choice, they must plan for and deploy forward-looking gateways from 2020, because their replacement cycles tend to be much longer than that of client devices. These two competing dynamics present an interesting challenge for service providers when considering how to provision for the inclusion of Wi-Fi 6 at 6GHz into their product roadmaps.

Adaptive MIMO is a technology that was introduced in June 2018, to address exactly the kind of complex issues service providers are now facing. With Adaptive MIMO, infrastructure devices can dynamically change their 5GHz MIMO configuration between one 8x8 radio and two 4x4 radios depending on the operating environment, such as the number of client devices, the amount of interference from neighbors and other factors.

This technology also provides a powerful solution when it comes to 6GHz market adoption for Wi-Fi 6 gateways. Adaptive 6GHz MIMO means that a hardware design can configure itself as one 8x8 5GHz radio and one 4x4 2.4GHz radio (configuration 1), or as three 4x4 radios operating at 6GHz, 5GHz and 2.4GHz (configuration 2).

The introduction of 6GHz is expected to enable a new paradigm in performance and usability through Wi-Fi 6 devices. It will support growing use-cases, such as OTT and streaming 4K video.

In addition to the FCC, regulatory bodies in other regions including Canada and the European Union are considering adopting 6GHz for unlicensed use. Recognising the challenges involved, manufacturers of infrastructure devices now have access to intelligent and cost-efficient architectures, such as Adaptive MIMO, that can equip them to meet the challenges involved with enabling Wi-Fi 6 at 6GHz.

Quantenna"Quantenna is passionate about doing one thing - building the best Wi-Fi solutions that push the capabilities of next generation wireless applications."