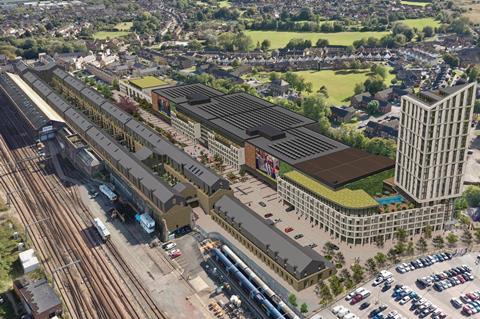 Planning permission has been granted to the £250 million film and TV studio development in Ashford, Kent which is set to be completed by early 2022.

The approval to redevelop Kent’s derelict Newtown Railway Works into the Ashford International Film Studios was approved by the Ashford Borough Council during a virtual meeting last week.

The Creative District Improvement Company (TCDI) plans to open the studios in early 2022 and the firm claimed it is the biggest single investment in a UK studio. Netflix and Amazon have already reportedly indicated interest in using the space.

The studio space is designed to address the increased demand in the UK for more production and post facilities.

The development will create four new TV and Film studios in 240,000 square foot of dedicated production space and is expected to create jobs in the local area of Ashford.

The firm said in its original announcement of the site: “It is hoped this will become the largest film school in the country.”

In addition, there will be a 120-room hotel, 68 serviced apartments, a creative industries conference centre and a 10,000sqft gym, restaurant and leisure space.

British Film and Commission and Film London chief executive Adrian Wootton OBE said: “We are of course operating in unprecedented times and the impact of Covid-19 will undoubtedly be felt deeply by screen industries as we work through this ever-evolving situation.

“Today’s announcement highlights the industry’s commitment to an ongoing strategy to ensure its sustainability, building on the UK’s rich history of attracting filmmakers, nurturing talent and creating world class content.”

Ashford Studios is part of TCDI’s £500m investment in developing studios in the UK and meet what it says is a “huge (2.5m square foot) deficit in available studio space.”

Piers Read and Jeremy Rainbird, founders of TCDI said of the announcement: “As we emerge from COVID-19 there will continue to be unprecedented demands for stage space and a demand for skilled workers which will continue to grow.”

“With AI constantly encroaching into the UK employment sector, the creative industry is one of the only industries that robustly defends itself from mass unemployment.

“British TV and film making is the best in the world thanks to facilities like Ashford International Studios.”