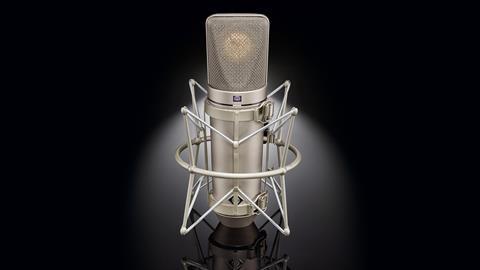 NAB 2018: In the past few years there has been more parity between audio and video, and no longer is the cliche “audio is the poor relation to video” trotted out at exhibitions. 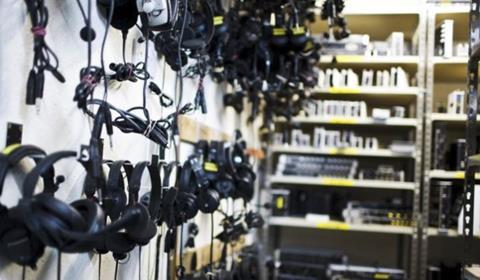 Audio has started to lead in some specific technology areas, notably IP and immersive experiences for virtual and augmented realities (VR/AR).

This was noticeable at the 2018 NAB Show in Las Vegas, where these picture-less technologies continued to establish themselves.

Among the companies leading the way in audio capture for VR and AR is Sennheiser with its Ambeo Ambisonic immersive microphone. The manufacturer has taken a high volume, lower cost approach to producing what was previously a very specialised piece of equipment.

During this year’s NAB Show it displayed the AMBEO VR mic alongside the Ambeo Smart Headset recording system for Apple iOS devices and Neumann KU 100 dummy head, which is used for binaural headphone productions.

Sennheiser also established a partnership programme to develop compatibility between the AMBEO mic and a range of equipment, including audio recorders and workstations, to help form a VR production chain.

Among the first partners were Orah (formerly VideoStitch), developer of 360-degree creation software; Sphericam, producer of the Beast cinematic 360-degree camera; and Aaton Digital, which is now making Ambeo compliance standard on its CantarX3 and CantarMini location recorders.

During the NAB Show another leading recorder manufacturer, Sound Devices, was announced as a new partner, as was VR post-production software developer Assimilate.

Sound Devices’ MixPre-6 and Mix-Pre-10T units now come with integrated binaural decoding, which allows spatial placement to be decided during the acquisition process rather than on an audio workstation in post-production.

The Assimilate Scratch VR software packages features the Ambeo A-format to B-format converter, which translates the raw spatial information as recorded into the four usable signals that create an immersive effect.

A and B-formats were developed as part of Ambisonics by Michael Gerzon, who also invented the SoundField microphone to capture spatial audio information. The SoundField mic is now produced by Australian manufacturer Røde, which bought the brand and intellectual property in 2016. 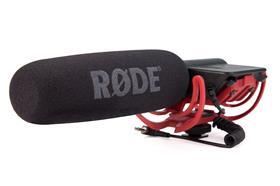 Røde introduced a version of its on-camera VideoMic featuring the technology in 2017 but has now launched a product that is more like the original device, only priced under $1000. The SoundField NT-SF1 includes new capsules in the tetrahedral array and will work with a forthcoming plug-in for A-format to B-format conversion.

Røde and Sennheiser have brought immersive audio to a wider audience at a much more affordable price but companies better known for mobile device technology are taking that further.

Nokia was at the NAB Show with Ozo Audio, which works on its range of smartphones to record and playback what is popularly known as 3D sound. It uses psychoacoustic techniques to create what Nokia claims is realistic spatial audio. It can work with both Ambisonic and object-based inputs and is able to reproduce binaurally for headphone listening. 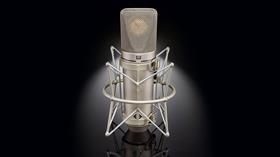 Microphone choice continues to grow, with new models appearing regularly. Among these is the reappearance of an old classic; Neumann has reissued the U67 tube voice mic as a regular product built to its original technical specifications.

New and expanded wireless mics also continue to appear, responding to the ever growing demands of TV production for more mobility and flexibility, while at the same time facing the prospect of less frequency spectrum in which to operate.

Neumann’s parent company, Sennheiser, added to its range of camera microphone systems with the evolution wireless G4 series, which offers two sub-lines and is aimed at filmmaking, music and live speaking applications.

Audio-Technica showed the newest member of the 6000 Series; the ATW-T6002x is a handheld transmitter that can accommodate six different capsules for specific applications. Wisycom showed a new ultra wideband active antenna and booster, both intended to improve optimal range and control to gain maximum coverage.

Alteros’ GTX Series local area wireless mic network was used for presentations during the NAB Showcase, illustrating the ever-growing reach of the networking and connectivity technology. Audio over IP (AoIP) was in evidence on many stands round the various convention spaces, highlighting the integration and implementation of protocols including RAVENNA and Dante, as well as, perhaps more important, the AES67 interoperability standard. This also features as part of the recently agreed SMPTE ST2110 recommendations for video IP, albeit discussed as 2110-30.

The Dante Domain Manager is now fully available and designed to be customised for different user requirements and budgets. Also shown was the Avio range of adapters, which enables existing equipment to be connected to Dante networks. Audinate also announced that Dante will be able to support ST2110 by the end of this year.

AoIP in its various forms was evident on a wide range of products, from mixing consoles to processors to intercom. Wheatstone was an early adopter of the technology with its proprietary WheatNet-IP system, which is fully compatible with AES67. WheatNet-IP is the basis of the new EMX console, which joins the DMX in the PR&E range. 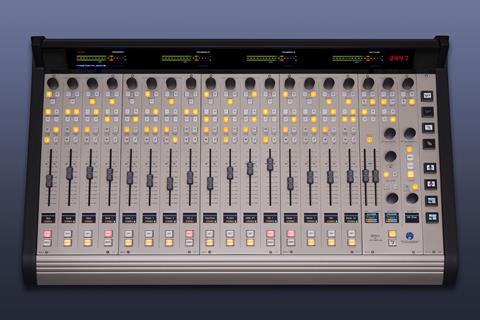 Both desks share the concept of “easy routing” as provided by AoIP, with the EMX offering up to 28-faders in a single frame, plus four stereo main buses, two stereo auxiliary buses and an offline bus. Wheatstone is also pushing ahead developing its virtual mixing system, releasing version 2.0 of ScreenBuilder, which is designed to run in WheatNet-IP networked facilities.

Solid State Logic (SSL) has moved into AoIP with the System T live-to-air mixing platform, which features the technology at its core. The company displayed the S300 compact broadcast desk in its new 32-fader form. Like the rest of the series, it incorporates universal AoIP connectivity, with the Tempest processing engines and network inputs/outputs able to handle Dante, AES67 and ST2110-30. System T is also keeping up with another current trend by offering integration with immersive audio workflows.

Calrec has incorporated AoIP interfaces into its live TV production consoles but during this NAB Show made the big jump to full IP operations with the Type-R desk. This product also marks a return to radio for the company, which has conceived the product as a modular system on a basic 2U core with COTS (commercial off the shelf) hardware and networking through Ethernet and AES67 compatible interfaces.

An area of audio that has seen particular implementation of AoIP is intercom. Glensound showed its Beatrice range, which is shipping now.

This comprises an eight-channel rack mount unit, the R8, a four-channel belt pack (B4) and a four-channel desktop (D4) version, all of which operate on Dante networks. Sonifex is due to start producing Dante-based products next year but has been concentrating on Ravenna/AES67, including for the AVN-TB6AR six button, AVN-TB10AR ten button and AVN-TB20AR 20 button intercoms. The Telos Alliance introduced the Infinity comms systems, based on its own Livewire+ format, which has full AES67 compatibility. This is a plug-and-play device and differs from bigger intercom systems by not featuring a matrix.