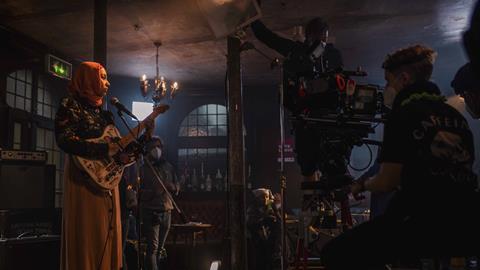 Behind the Scenes: We Are Lady Parts

Equal parts subversive, silly and sweet, Working Title’s music comedy We Are Lady parts is about a Muslim female punk band - called Lady Parts - who are on a mission to find a lead guitarist and maybe, just maybe, get a proper gig. Cinematographer Diana Olifirova shares her experiences of shooting this cinematic comedy.

With songs such as ‘Nobody’s Gonna Honour Kill My Sister But Me’, Channel 4/Peacock sitcom We Are Lady Parts, sets out to lift the veil on Muslim women. 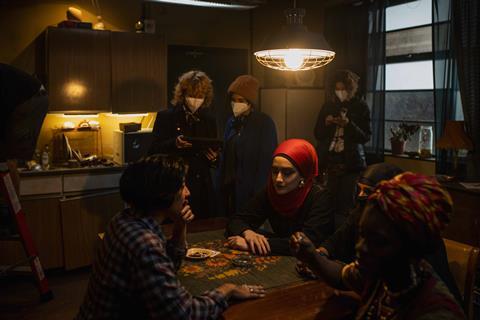 Creator (writer, director, producer) Nida Manzoor says that she took creative inspiration from The Young Ones and Spinal Tap while numerous other references pop up explicitly (Clockwork Orange, Brief Encounter) or implicitly to guide the look.

Diana Olifirova shot a 16-minute pilot for the show in 2018 and says the creative intent for the series commission was to widen the scope.

“Nida wanted to create a cinematic comedy not just a basic TV show, to make it as vibrant as possible and to use the language of cinematography to tell the story. I loved this. We would work a lot on every scene to tell the story using cinematic means, not just by acting and dialogue alone.”

An early example is in episode one where lead character Amina walks around the park, sees a guy walking towards her and immediately falls in love. 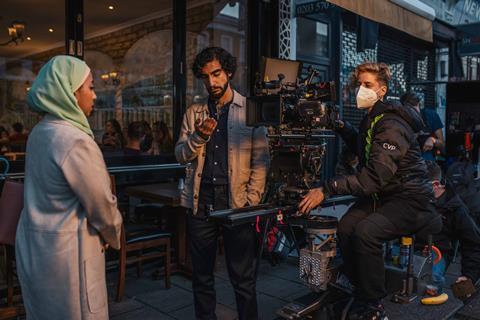 “I did that shot in the pilot and repeated it in a different location,” Olifirova explains. “We just felt it was such a very simple way of conveying this feeling of getting hooked on someone you see on the street. There’s no dialogue, just a voiceover.”

The shot walks with Amina, played by Anjana Vasan, and slowly pulls her towards us on Steadicam. As she sees the guy the camera travels 180-degrees around her. We see the guy from her point of view and then we move 180-degrees around both characters. In the end we focus on Amina, but the guy has disappeared.

“It’s a magic trick you do in camera. It’s one developing shot where the action happens in one movement and it makes you question whether the guy was there or not. In the grade we made the moment when she looks at the guy a little warmer and when he disappears everything returns to a cold exterior. The more things we do like that the more inspired I get about using cinematography in telling the story.”

Born in Ukraine, and a graduate of the NFTS, Olifirova is an emerging talent with festival screenings of her work including the short All of Me.

“I take all those on board and enhance with my own imagination and bounce a lot of ideas off the locations, the art department and costumes.” 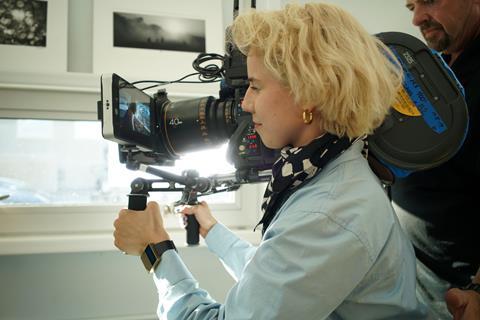 Olifirova: ’For me space is the most important because I like to have wide shots that create composition and enhance the emotion.’

“We wanted to put all five main characters in one frame so a cinematic aspect ratio, which is more width than height, was logical. I love anamorphic and wanted lenses that would be picturesque but not too distracting. The Cookes are a nice medium between being too in your face and being quite delicate.”

Look design involved differentiating the more demure and kind personality of Amina from that of the more raucous and unsettled character of Saira, the band’s guitarist.

“Amina’s world is very pastel in design and her scenes calmer in comparison to others. I used a lot of Steadicam and tracking movements and tried to light her with softer light, a bit less colour, more warmth and diffusion. Everything in her world looks cleaner and more pristine but this changes throughout the series. Mostly this change is elaborated in the costume. I tried to keep a similar vibe with her in camera movement and lighting.

“With Saira we use handheld always and have much more contrasty lighting, more colour and angles and a much harder light. For the scene where she goes back to family, I wanted to try to shoot using only light inside the set rather than any sunlight. I used mainly practicals just to make it very different to the other story worlds. Everything with her is darker in general.”

It’s clear that Olifirova had a lot of fun designing the music sequences. In episode one, Amina solos on guitar in the style of Don Mclean, in her wardrobe. This was shot in a 50m-long corridor with a camera track and dolly. Vasan was also on the platform as it tracked backwards through rows of clothes. 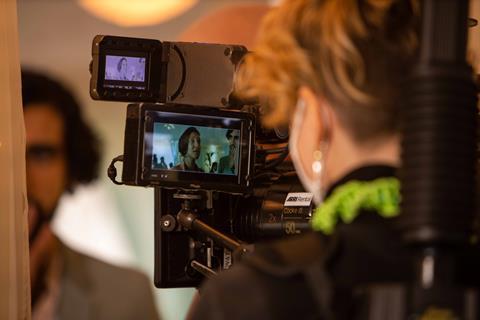 Olifirova: ’I bounce a lot of ideas off the locations, the art department and costumes.’

Olifirova had the camera on a slider with a zoom lens to perform a contra zoom movement while inside the ‘moving’ wardrobe. She also added interactive lights. Oh, and there are puppets duetting the chorus.

“We pulled a lot of things together to make it surreal and strange,” the DP says. 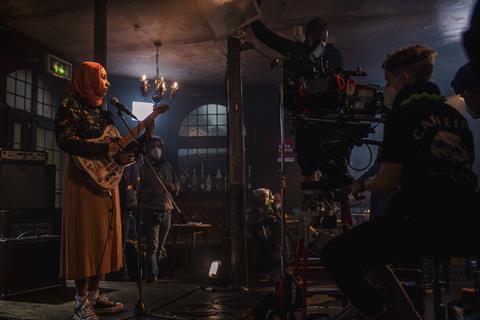 We Are Lady Parts: Musical sequences are key to the C4/Peacock comedy

For a pastiche of Brief Encounter, shot in black and white, she swapped out the cool LED bulbs on location for purple and green colours and also used white tungsten bulbs. “Even if you didn’t see it, you can sense that the lighting works for the feeling we’re trying to evoke.”

Her favourite of the musical numbers was the finale night-time exterior. It’s the scene of the band’s last gig which needed to be emotionally impactful but at same time look inexpensive.

“I was battling between wanting to use super fancy laser lights and keeping it low-key since that’s what Nida wanted. I used a couple of powerful moving lights that only turn on at the very end of the sequence. I think they work because the lights don’t touch any of the characters or go through the camera to make any flares. They don’t call attention to themselves. At the same time, I hope the scene is a fittingly touching emotional end.”

Covid impacted production, mainly forcing a change of exterior locations to studio builds. Olifirova didn’t mind this, saying that she likes to create within the space.

“It meant we had more creative input to light scenes as we wanted. We could take away the ceiling, choose lights of any colour. I like having space. For me space is the most important because I like to have wide shots that create composition and enhance the emotion. The more I can construct a shot in-front of the camera the happier I am.

“The challenge is that each image in a film has such a small amount of time for a person to see that image, so the cinematographer’s craft is to draw their attention to the element they need to see,” Diana Olifirova

“I like using mirrors and practical lighting and [Production Designer] Simon Walker provided us with such a variety of both. For example, if you don’t have a window on one side of the set but you have to shoot in the opposite direction you can use a mirror to reflect the window and add depth. I used a lot of those tricks.”

Olifirova grew up wanting to be a photographer and took as many courses as she could in Kiev. 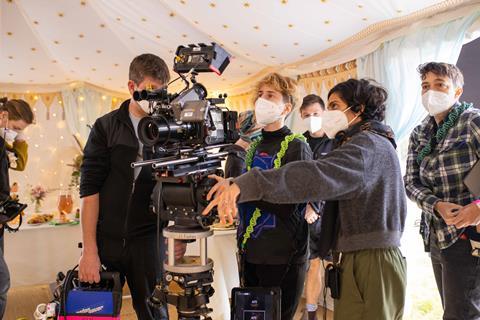 Olifirova had the camera on a slider with a zoom lens to perform a contra zoom movement while inside the ‘moving’ wardrobe.

She started shooting more and more and went to film school in London. While movies are a passion, what really drives her is the act of creation.

She recently wrapped shooting Netflix’s upcoming British teen series Heartstopper, based on the graphic novels by Alice Oseman and produced by See-Saw Films.

“What motivates me is making things happen together with a team. The challenge is that each image in a film has such a small amount of time for a person to see that image, so the cinematographer’s craft is to draw their attention to the element they need to see. It’s exciting for me to achieve that shot after shot after shot.