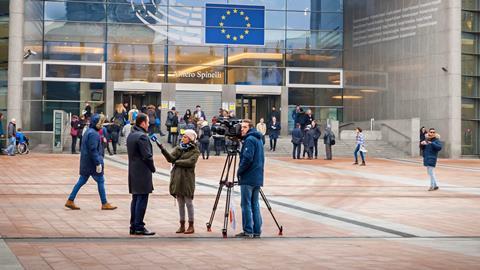 Brexit is causing unease among the UK’s production and wider creative industries but could the country’s “unique” mix of financial, legal and creative services protect it from any negative side-effects?

“If Angela Merkel (the German Chancellor) couldn’t get her favourite programme any more – Midsomer Murders – as pay back in some sort of Brexit negotiations that would seem particularly childish,” says John McVay, Chief Executive of PACT, the independent programme producer’s organisation.

Slightly more seriously the PACT executive adds that it would be perverse if the European Commission were to deny or limit access by European voters to high quality British content to pay us back for the Brexit referendum vote.

Whether or not the television tastes of prominent European leaders will have anything to do with the outcome of the Brexit negotiations, there is a clear sense of unease among the UK’s production and wider creative industries.

At least for now it is less about concrete fears than worries about uncertainty and the difficulty of drawing up contingency plans for an imprecise future – the sort of uncertainty facing all industries in the UK.

But no less than 9 of the 58 Government reports on the expected impact of Brexit on different industrial sectors are believed to deal with the media and other creative industries.

“Could the EU decide to impose tariffs on UK film and television productions to try to boost its own production centres?”

And while the Government has been reluctant to publish the reports because it might undermine the UK’s negotiating position John Kampfner, Chief Executive of the Creative Industries Federation, believes the real reason for the reluctance to publish is their rudimentary nature.

Without the help of Government assessments there are five  main areas of concern about production, all with question marks attached.

The first is whether the current mobility of talent on which the UK as one of the world’s largest production hubs depends, will be preserved after Brexit.

It is not just about famous actors and directors but skilled editors, special effects experts and experienced crew-members.

There are concerns about whether post-Brexit British films and television will still quality for EU broadcast quotas which require members to devote 50% of their schedules and 20% of revenues to European output.

It would be a clear disadvantage if UK productions had to fight with the rest of the world for the non-EU allotment.

Could the EU decide to impose tariffs on UK film and television productions to try to boost their own production centres from Paris to Munich?

More than 650 non-British channels – including all the US majors from Disney and Viacom to Discovery- are licenced by the UK communications regulator Ofcom and then can be broadcast freely though all the other countries of the EU. What happens when they have to find anther qualified “country of origin” within the remaining 27 countries of the EU?

There are also concerns about raising production funds and whether the British Government will replicate Commission support for script development, training and international co-productions.

“The situation was worrying when the vote took place. It is considerably more so now because of the difficulties in negotiation and the continued uncertainty across each and every ramification of Brexit,” says Kampfner whose organisation has held a series of Brexit round tables around the country and which is planning a large Brexit conference in March.

For the Federation most of the concerns lie in the issue of talent, and the mobility of talent.

“We continue to advocate the case for the freedom of movement although that is almost certainly not going to happen,” Kampfner concedes.

The next option is to fight for the most frictionless movement possible of the international talent the UK needs to work on global quality products. There is a shortage of such talent in the UK, not least because of the lack of education for the creative industries in British schools.

Kampfner accepts that temporary visas will always be available for the top film and TV directors, his concerns are more about young aspiring talents from the rest of Europe no longer choosing to come to the UK.

“It’s much more the 20-something, couch-surfing next generation of talent. England will no longer be seen as that kind of cool place where you turn up to see what is happening,” Kampfner fears.

“Immigration rules in future must be flexible enough to enable a film editor based in Budapest come to London for a few days work with the minimum of fuss.”

Guy Bisson, Research Director of Ampere Analysis, believes Brexit will not have a huge impact on the UK production industry, with two important caveats – as long as British production is still recognised for EU quotas and as long as the EU does not apply tariffs to UK films and television programmes.

If neither happens then the overall impact could be less than generally expected.

“My feeling is that the production industry is less at risk than the channels business,” says Bisson.

McVay of PACT also does not see any sign of a negative Brexit effect on production, at least for now, and hopes that, whatever happens, the UK will remain an attractive place for artists to come and work and still share a common European culture.

Tariffs are not imposed on foreign productions now, so he sees no reason why they should be imposed in future, unless there is a revenge motive from the European Commission.

Likewise, the definition of  “European” production is set not by the EU but by the Council of Europe, which has 47 members.   Although, in theory that could be changed, there is no sign of it  actually happening.

The “country of origin” and the international channels re-transmitted from the UK to the rest of the EU – a more than £5 billion a year business – is much more of a material issue.

It is likely that a London-based international broadcaster will have to get new broadcasting licences within the EU and that a significant editorial presence will be required rather than a brass plate outside a lawyers office. It is far from clear just how large such a presence will need to be.

“If Europe wants high quality regulation and channels it might be better for the Commission to continue doing it through the UK,” suggests McVay, though that might be a long shot.

Damian Collins, who chairs the influential Department of Digital, Culture, Media and Sport Commons select committee says ministers are very alive to the issues arising from movement of talent, the provision of the right mix of incentives for production, and re-transmission.

The UK will be able to set its own immigration rules in future and they must be flexible enough to enable a film editor based in Budapest come to London for a few days work with the minimum of fuss.

Film production is booming in the UK at the moment and the key reasons are access to talent and production tax credits, with a further boost from the fall in the pound.

“If there was any threat to the sector we could look at making tax credits more attractive. Outside the single market we would be free to do that,” says the Conservative MP, whose background is in advertising.

Collins believes London will remain the creative centre of Europe, as prominent as it is in financial services.

But because of the impact of “county of origin” following Brexit he fears “a bleeding off at the edges” to a range of other European cities although not enough to threaten London’s dominance.

London has the unique combination of financial, legal and creative services. If you want to raise money or launch a big project you have to come to London, the Select committee chairman believes.

“I think that will continue (post Brexit) London will remain the most important creative media centre in Europe but we want to make sure we don’t lose people and stay as far ahead as we are now,” Damian Collins insists.