Amid Covid-related travel restrictions and uncertainty, the Champions League Final between Manchester City and Chelsea will provide BT Sport with the perfect opportunity to showcase its ongoing adoption of remote production. 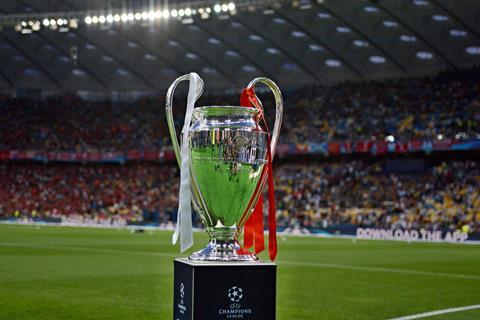 BT Sport: Airing the final for free on its YouTube channel

The BT Sport presentation team were on board a plane circling in a holding pattern over Europe for two weeks until they could finally tell the pilot where to land.

Jamie Hindhaugh, the broadcaster’s COO, uses the analogy to describe plans for the 2021 Champions League final which were thrown up in the air when the UK government’s Covid-related travel ban torpedoed hosting the game in Istanbul.

“The biggest challenge for the final and all our Champions League coverage this season has been the travel restrictions, the late notifications and the lack of clarity which has made it very difficult,” he tells IBC365.

UEFA eventually decided to relocate the tie between Chelsea and Manchester City to Porto in UK green list country Portugal.

“Most of the planning was done but it’s not as straight forward as moving from one location to another 3,000km away. There’s a different country, different connectivity and a different set up,” Hindhaugh says.

One element that didn’t change was UEFA’s host broadcast provision by Mediapro with whom BT Sport have worked many times before. The Barcelona-based facilities group has produced and distributed the world feed for the last two Champions League finals.

“When Porto was announced it wasn’t clear whether Portugal’s borders would be open,” Hindhaugh says. “If fans were not allowed to travel then it was important to us that we would not send a presentation team either. With limited fans allowed into the ground (6000 tickets per team), we have decided to send a pres team.”

“Most of the planning was done but it’s not as straight forward as moving from one location to another 3000km away. There’s a different country, different connectivity and a different set up,” Jamie Hindhaugh, BT Sport

Nonetheless, it’s a stripped-down crew that has travelled out to Porto mainly in support of on-air talent led by Gary Lineker and BT Sport’s match commentators.

“We’ve been doing wide area production over the past year on at least 70 Premier League games so it has sort of become normal,” says BT Sport chief engineer Andy Beale. “The challenge is that relaying feeds from Porto is over a much longer distance with greater connectivity challenges. Nonetheless, you realise how much of a step forward we’ve taken in the space of 12 months.” 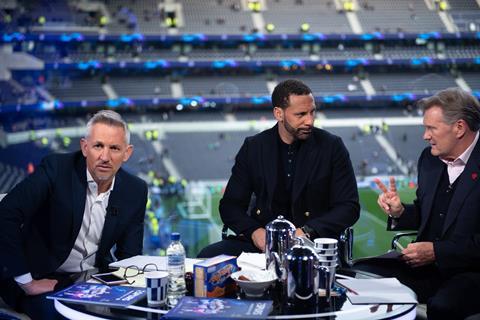 Crew: BT Sport had to send a stripped-down crew to Porto with the rest working from London

Host feed and unilateral presentation
Mediapro is producing a dual HDR 4K feed and HD SDR feed which BT Sport is augmenting with eight camera positions of its own. These include three cams on the presentation platform with Lineker and pundits. On either gantry there’s a Sony HDC-4300 with zooms to enable BT Sport’s match director control of some close-ups, particularly during pre-match warm-up and post-match analysis and also to pick up VIPs in the crowd (Manchester City fan Noel Gallagher is expected to be singled out).

There are also two reporter cameras (4300s with smaller lenses) for pitch side interviews and two Sony F55s carrying prime lenses behind and to the side of each goal for filmic beauty shot additions to edits and highlight packages. The F55 camera operators will also be tasked with capturing fan reaction.

A Timeline truck will be onsite, mainly facilitating connectivity of all the signals. In the truck the feeds are encoded in HEVC. One encoder runs native 4K and another five return the individual 1080p 50 ISOs. All are routed over dual 1Gig fibre links from the venue into BT’s Stratford studio along with VoIP and talkback. BT Sport’s director, producer, VT ops and graphics ops control the production in Stratford and send it to air.

This remote template is now par for the course at the broadcaster which has performed hundreds of such operations in the past 12 months.

“The last time we did a full OB from the Champions League in 2019 we sent 200 people,” Hindhaugh says. “This week we’ll send 43. The rest of the crew are in London. The world is changing and we’ve proved you don’t need to chew up airmiles by sending crew to venues. Actually, we can do the job as well, if not better, remotely.”

“The last time we did a full OB from the Champions League in 2019 we sent 200 people. This week we’ll send 43,” Jamie Hindhaugh, BT Sport

He explains: “At the studio we have access to all our tools and the archive so we can respond to a story really quickly. For example, if a player has an injury similar to a previous one we can search the archive, pull out a relevant clip and make that part of editorial. Genuinely, there is no compromise editorially and there are big benefits.”

This includes the sanity of the crew, who in normal circumstances for a major OB would have to arrive on site hours before kick-off after enduring a lengthy navigation of security.

“We’ve seen how much more relaxed production folk are working in a remote world,” Hindhaugh says. “The tempo and stress levels in our production teams who don’t have to worry about getting to site on time, plus the comfort of having more space to work in, is a big step forward.”

YouTube viewers get HFR
BT’s coverage includes a 4K HDR Dolby sound version for its Ultimate platform and a standard HD SDR for BT Sport 1 HD. The HDR distribution is PQ since the feed is predominantly received by mobile device and smart TVs over the internet not through the STB.

As before, the broadcaster will share the live feed for free to audiences on YouTube. This time around the experience will be in high frame rates.

“Every year we’ve partnered with YouTube we’ve moved the quality up,” Beale says. “We will push 50p into YouTube and they will transcode on the fly in the cloud outputting 60p. The difference in quality is breathtaking… the motion portrayal is brilliant.”

BT Sport also has camera crew at fan parks in Manchester and London as well as in two club-affiliated pubs for colour.

“We have to recognise there is still a very limited number of fans who can travel so we will bring that colour into our programming all the way through,” Hindhaugh says. “It’s the biggest game in the calendar. The only thing we’re cautious about is that when there’s only two British teams in the final there’s more of a polarisation in the audience. But this is the standout game of the season.”

The last time two English Premier League clubs fought it out in the final, when Liverpool beat Spurs in 2019, viewing figures to BT Sport’s broadcast over digital and linear topped 11.3 million, the highest figures BT Sport has ever had across all channels.

BT Sport has the rights to air the Champions League until 2024 in a three-year deal worth more than £1.2 billion.

To ensure no-one watching misses a kick, the broadcaster has a triple lock redundancy. Aside from dual fibre routes, as a third layer of redundancy there will be two encoders running a lower bit rate that squeezes into two 27MHz satellite transponders for return of the eight presentation feeds plus comms. UEFA has arranged separate match feed relay by satellite.

“If there’s a catastrophic failure with terrestrial connectivity then we’ve still got access,” Beale says. “We have more belts and braces on this thing than you can imagine.”

There are inevitably some small compromises. While Istanbul’s Atatürk Olympic Stadium was fully outfitted with fibre, the same wasn’t possible in two weeks at FC Porto’s Estádio do Dragão. That means fewer than the normal compliment of cameras (from 40 to around 30). Aviation clearance wasn’t possible for a helicopter and BT Sport’s dedicated VR truck couldn’t make the journey.

360-fans won’t be disappointed though since BT is able to take UEFA’s own live VR feed and make that available through the BT app. 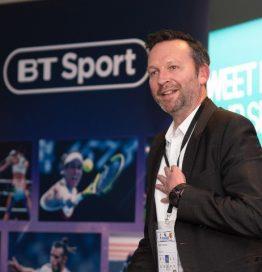 Remote distributed permanent production
“Remote is our default way of working now,” says Hindhaugh. “We’ll always tweak and refine it. There are always options depending on connectivity at the venue but the benefits are vast. We have opportunities to enhance our output and reach sustainability goals. The key thing is that we’ve maintained the quality of our output at UHD HDR. Remote is how we are building our workflows going forward.”

Indeed, BT Sport has only made three non-remote OBs in the last year. Two of those were from boxing venues with no connectivity and required two trucks rather than one to accommodate social distancing and the third was a deliberate choice to try out some new technology which it was not possible to do any other way.

BT Sport is currently outfitting its Stratford facility with an IP core as the next stage in its move to cloud.

“We look at cloud all the time,” says Beale. “For a live tier 1 event or as a match host broadcaster the tools are not yet rich enough. If I were trying to produce a tier 3 event where I had adequate internet connectivity on site then cloud is getting to the point of possibility. But in live cloud production demos I’ve seen they tend to be about cutting pictures which, in my opinion, is the easy bit. The challenging part is always the control layer, the tally and comms, the audio mixes and IFBs and clean feeds that need to catch up with switching video. Those are all relatively low bitrate applications in terms of getting in and out of cloud but no one has built those solutions.”

He adds: “We first worked with ST-2110 suppliers back in 2016, nothing has really changed in that space in five years. Interop in 2110 is poor and the business benefits aren’t really there, but if you compare the evolution of cloud tech in the same period then it’s clear that it won’t be long before we see some of our productions moving into that space.”