C4 and Vodafone team up on 5G enhanced TV series 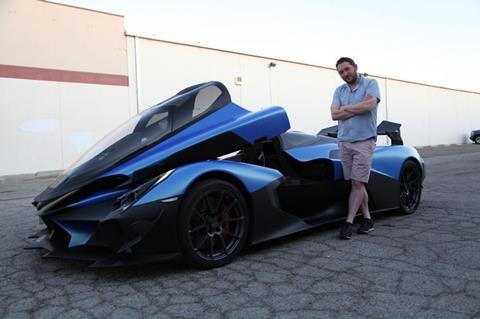 New series: Kevin McCloud on Rough Guide to the Future

The Rough Guide to the Future series, presented by Kevin McCloud, will feature stories around new technology and the importance of 5G in making them a reality.

Vodafone has partnered with Channel 4 to produce a three-part prime-time series that brings to life the infinite possibilities of 5G.

Technology evangelist Kevin McCloud will present the series featuring stories on new technologies and how 5G has made them a reality.

The project was managed by Wavemaker Content and will be amplified by social media content, digital activation and the traditional TV spot from this Wednesday when the first episode airs at 9pm local time.

The entertainment series is the first advertiser-funded programme from telco Vodafone to air on terrestrial television.

It’s a timely investment from Vodafone as the UK rolls out 5G in what is “the biggest technology evolution since the emergence of the smartphone” the company said in a statement.

Vodafone UK consumer director Max Taylor said: “We want the public to know that our investment in 5G, which sees us offer it in more places than any other network and at no extra cost, is about so much more than lightning-fast download speeds.

“It is about connecting us for a better future. This new series brings to life the huge possibilities that 5G can unlock in areas as diverse as robotics, sustainability, and communication.

“I hope it will inspire the nation as to the potential of 5G.”

The TV series investigates the effect 5G-powered technology will have on our lives in a humorous, relatable and entertaining way.

The three-episode series each running one hour will see McCloud challenge a group of cynical celebrities to discover how 5G is driving the latest in technical innovation.

As it stands Vodafone is the only network operator with 5G roaming in 108 places across Europe including 40 locations in the UK and 68 across Germany, Spain, Italy and Ireland.

The potential of 5G for businesses and the public to “live and work better” through 5G-enriched applications and is possibility to enable huge innovation, is something the general public has not been educated in.

Vodafone found that many of its consumers currently perceive 5G’s key benefit as only significantly improving faster download speeds.

However, Vodafone is leading the roll-out of 5G across Europe and is focused on building consumer trust and awareness as it begins to become more widely available.

The Rough Guide to the Future was commissioned by Channel 4 Science and Adventure commissioning editor Jonah Weston. It was produced by Boundless which is part of Fremantle UK with executive producers Ben Mitchell and Jack Kennedy.