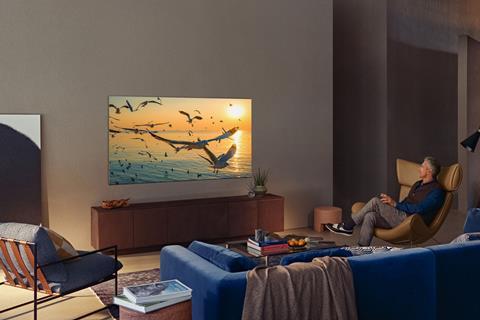 Samsung: Introduced a new game bar on its Neo-QLED TVs

For a show devoted to connected consumer tech surely nothing could be more apt than an all-digital affair. Rather than 180,000 attendees rummaging across 2.9 million square feet of exhibits in Las Vegas, CES 2021 was held online.

It distinctly lacked the buzz and razzamatazz of previous shows. Billie Eilish and Dua Lipa were among stars making an appearance on the virtual stage only to highlight the glaring gap between today’s remote live experiences and that of being physically present.

Lo-fi CES experience
While 6000+ members of the media didn’t have to wait for hours in line before possible admittance to press conferences, the presentations were, if anything, even more staged than normal. Some were delivered live but felt drained of energy without the jeopardy of appearing before a crowd.

Perhaps that’s just a symptom of the times. Companies zeroed in on technology aids to health, well-being and lifestyle including face masks packed with Bluetooth headsets and microphones.

The virtual nature of the show meant that household brands like LG, Sony, Samsung and Mercedes dominated headlines and conference sessions, while smaller innovators were buried. 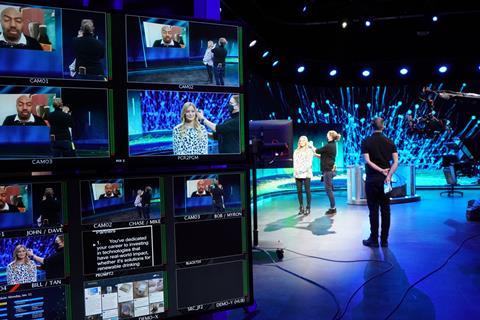 The plus sides of attending a trade show of this scale virtually is that attendees weren’t jostling with each other to get to meetings. Over 100,000 folk apparently participated and kudos must go to the technical operation, led by Microsoft and MediaKind, for the fluency of the live video sessions.

The trend that Microsoft CEO Satya Nadella spotted last April — “We’ve seen two years’ worth of digital transformation in two months” — continued through 2020 and beyond.

“250 million people went to remote learning in two weeks,” said Koenig. “It took Disney just five months to hit 50 million global subs whereas it took Netflix seven years. The point is that the events of the past year will transform the overall economy for the next decade.”

Streaming up, TVs in
Stay at home orders have been a boon to video streaming and, after years of mobile-first rhetoric, it is the living room telly which has had its status emboldened.

Research from Nielsen published during CES revealed that nearly a quarter of all TV viewing comes from streaming apps and that there’s a significant rise in audiences watching live linear TV.

“HDR is really the next big advance in imagery for gaming…it brings depth to the realism we’ve been striving for,” Habib Zargarpour, Unity Technologies

One reason for this has been adoption of streaming by older age groups. Moreover, they aren’t expected just to revert back again.

“During the ‘stay at home’ period a lot more people put the plumbing in to stream,” said Fuhrer.  “People figured out how to get credentials and tried a lot of services. We think that is going to be the pivot for a lot of media consumption going forward as older demos increase and maintain their usage and sampling.”

All of this means TV vendors suddenly have a new market to play for. The CTA expects sales of TVs to soar in 2021 as households upgrade. On the shopping list will be bigger, brighter and thinner screens with at least 4K resolution and the smarts to upscale content to 8K.

Hisense, for example, is adding an 8K up-rezzing chip to its flagship ULED TVs later this year and will promote this through its official partnership with the rescheduled Euro 2020 soccer tournament.

TV vendors also spot an opportunity to take a share of the revenues generated by the volume of streaming and search for content of which their hardware is a conduit.

Just before CES, LG spent $80 million for a 60% stake in TV advertising technology company Alphonso, in a bid to build a streaming-TV ad business. The Korean firm will package ad inventory with Alphonso’s analytics and ad-buying capabilities to compete with established streaming ad players like Roku.

Gaming moves centre stage
The other near universal characteristic of TV hardware version 2021 is applications for gamers. Video games are being played more than ever, for entertainment or for staying connected socially. The CTA projects that video game software and services will reach $47 billion in revenue this year in North America alone, up 8 percent from 2020. 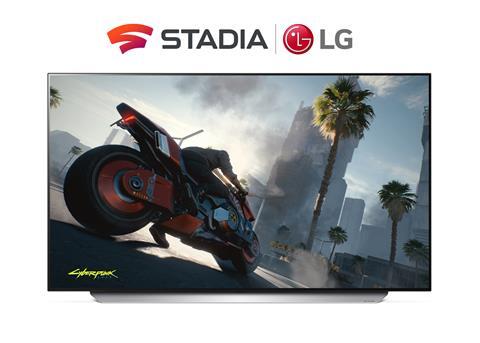 LG: Has partnered with Google Stadia to woo gamers away from their PCs

TV display makers hope to woo the gaming audience away from the PC monitor.  LG, for instance, touted a partnership with Google which will see cloud-gaming service Google Stadia run on its TVs while Amazon Twitch has earned a prized button on LG’s ‘magic’ remote control.

The company also unveiled a prototype 48-inch OLED capable of bending 1000mm from a conventional flat screen to a curved display intended to help gamers to feel more immersed in a virtual world.

Panasonic’s latest 55-inch and 65-inch JZ2000 model supports for HDMI 2.1 for variable refresh rate and high frame rates suitable for gaming. An AI processor will automatically detect what you’re watching or playing and calibrate the best dynamic range settings including Dolby Vision IQ and HDR10+ Adaptive. Alongside Dolby Atmos support, the TV comes with side and upward-firing built-in speakers which create what the company calls 360° Soundscape Pro.

Samsung (which is already partnered with Microsoft’s XCloud gaming) has introduced a ‘game bar’ in its range of new NEO QLED TVs for gamers to change the parameters of the screen when attached to a PS5 or Xbox Series X. The aspect ratio, for example, can be changed from 21:9 or 32:9 and it can support 4K at 120fps. An additional new soundbar comes with a gaming mode to introduce “more dynamics to your game experience”, as well as an Active Voice Amplifier to boost dialogue in films and TV shows when it detects noise disturbances.

Serious gamers might prefer the conceptual chair shown by Razer and built of carbon fibre with a transparent wrap-around display, haptic feedback and RGB lighting. 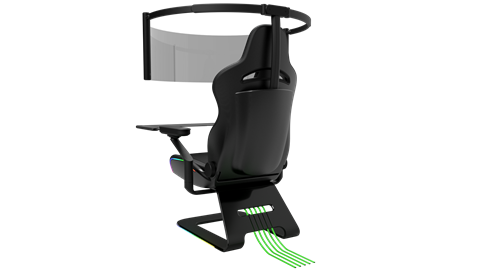 Still, the most important feature for gamers are screens capable of playing back High Dynamic Range (HDR), Wide Colour Gamut and Dolby Atmos, all of which are supported in the latest PS5 and Xbox X consoles. While being rapidly adopted to improve the cinematic experience surprisingly these features have been more sluggish in gaming.

“Games engines have always been able to render in HDR but the actual display output has been a challenge,” said Tony Tamasi, SVP content and technology, Nvidia during a conference panel. “Display interfaces that commonly support HDR, the ability to connect a GPU to a display in a standardised fashion are among issues on the cusp of being solved.”

“HDR is really the next big advance in imagery for gaming,” agreed Habib Zargarpour, Head of Film Development, Unity Technologies. “DR brings depth to the realism we’ve been striving for. In filmmaking every step in the pipe from camera to storage, editorial to VFX needs to be upgraded but on a game engine the programmer just changes a number and you have support for the new format. That’s also where there’s an opportunity now with game engines linked to LED virtual production stages.”

Nicole LaPointe Jameson, CEO of esports outfit Evil Geniuses said, “The problem my athletes frequently face is the decision making they make in split seconds is limited by the amount of information they can take in. So better contrast and even minute detail in shadows and highlights has great significance on our ability to compete.”

Tamasi said Nvidia and others were staring to use ray tracing to compute true rendered 3D spatialised audio – “getting proper reverberation and occlusion by using what you might normally think of as a graphics capability to trace audio waves,” he said. “This next level of audio immersion is an exciting development.”

Gamers will listen using headphones meaning that the exact representation of the audio in sync with the graphics is another key to how each player interprets their response.

“It took Disney just five months to hit 50 million global subs whereas it took Netflix seven years. The point is that the events of the past year will transform the overall economy for the next decade,” Steve Koenig, CTA

The headphones landscape has experienced phenomenal growth over the last decade and as a result, headphones are becoming the fastest-selling personal electronic device on the market, according to Futuresource Consulting. Headphones and true wireless devices are expected to grow to over 700 million in five years’ time.

This was a major theme at Sony which expanded its consumer focussed 360 Reality Audio service, by adding new video streaming capabilities and content creation tools. Introduced in 2019, 360 Reality Audio makes it possible for artists and creators to produce music by mapping sound sources such as vocals, chorus and instruments with positional information and placing them within a spherical space. It is intended to evoke feelings of being in a music studio or live concert venue.

Live video performances have now been added to the sound. With select Sony headphones and an app, users can have their individual ear shape analysed to enjoy a customised musical field.

Sony said artists on its label and others will begin streaming video performances later this year.

The company also launched a professional audio mixing tool which could give producers and directors a better means of sharing in the final audio reviews remotely. Fine tuning the sound mix on commercials, TV or film productions was a client-attend fixture pre-Covid but the creative back and forth under remote conditions has been hampered since no party can be sure they are hearing the exact same thing.

Sony’s 360 virtual mixing environment (VME) “is a mind-blowing tech that can reproduce in a pair of headphones the same sound mixed by professionals in a studio,” said Bill Baggelaar, EVP and CTO of technology development for Sony Pictures Entertainment in a video.

Sony Pictures’ Ghostbusters: Afterlife and Venom 2 have been the first to try out the technology which replicates the speakers of a sound stage in any location and supports 5.1, 7.1 and Dolby Atmos mixes.

“You are truly fooling your brain into thinking you are in the other environment,” Baggelaar told The Hollywood Reporter.

The 360 VME was developed by Sony Electronics’ R&D team in Tokyo working with the studio’s Innovation and Sound Services departments in Culver City.

The Minority Report report
LG took the wraps off a series of transparent OLED screens, including one that rolls up from being concealed in the foot of a bed. Other applications for this futuristic idea include restaurants and subways for displaying video and spooling graphics, eerily prescient in the pre-crime solving unit of Minority Report.

Another jump to the future was the Hyperscreen from Mercedes-Benz which is a 56-inch curved touchscreen that takes up almost the entire width of a car dashboard. Voice control software learns and adapts to driver behaviour. It could be fitted in new electric vehicles.

Topping the lot, is the vertical take-off flying taxi paraded by General Motors.