CES 2022: Displays move beyond the screen

Smart TVs are no longer the centre attraction at CES but a new wave of innovations capable of projecting movies, games and augmented reality either with or without screens are pointing to the future of display technology.

Commercial interest in more comfortable AR/VR headgear may have accelerated during the pandemic when we’ve all been fatigued by wearing masks. If developing the old-fashioned telly box is nearly exhausted, can full immersion be achieved without a screen altogether? CES 2022 clearly demonstrated this evolution. 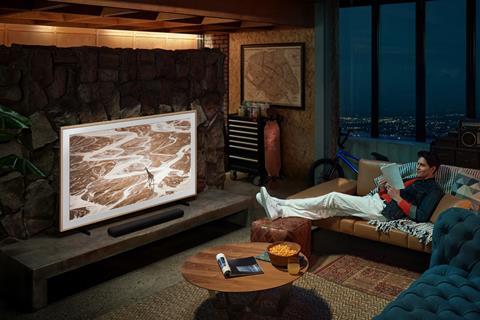 The future of display technology

Starting with conventional TVs, the latest top of the range models continue to evolve.

Samsung’s 2022 Neo QLED range are capable of playing back 8K at 144Hz instead of the usual 120Hz as it targets gamers. These also boast a new ‘Shape Adaptive Light Control’ feature that theoretically improves the sets’ quality, and an AI-driven ‘Object Depth Enhancer’ to help distinguish a picture’s main subject from its background.

TCL previewed an 85-inch 8K mini-LED prototype, claimed to be the thinnest such telly around at just 3.9mm; and Sony introduce its first mini-LED models, including a version with 8K resolution.

A clear aim of TV manufacturers is to reduce the footprint of the box while amping up the screen size. LG for instance previewed transparent OLED technology which you are only supposed to notice when switched on.

LG continues to back OLED over mini-LED by rolling out its next generation OLED.EX which the company says tackles the brightness issue that plagues the technology. All LG’s OLED models will now be made with OLED.EX which LG says deliver up to 30 percent higher brightness compared to conventional OLED displays.

The Korean firm was also showing a ‘media chair’, described as a relaxation device which uses a 55-inch OLED display with a recliner and curvature radius of 1,500R. The chair has a pivot function to allow the screen to rotate vertically and horizontally allowing users to customise their viewing experience.

If you don’t want 75+ inches of black plastic to dominate your living room, but you would like an impressive movie or sports experience then home theatre projectors could be just the ticket. Traditionally these suffer in comparison to TVs with lower brightness and resolution levels.

A cheaper, smaller but less high specced option is Samsung’s The Freestyle ($899), an “ultra-portable” unit that weighs less than 2 pounds and can project 550 lumens of brightness to a wall or screen from just 30 inches . It features auto-focus and auto-leveling capabilities to automatically align its image to any surface and comes with access to Samsung’s smart TV platform to stream Netflix and other content. The Verge thinks that at those brightness levels (its HD too) “Freestyle seems like an ideal companion to TikTok videos, and not so much your Blu-ray collection.”

Would you watch a movie through smart glasses? Some vendors believe there’s an inevitability about streaming movies to head-mounted displays. 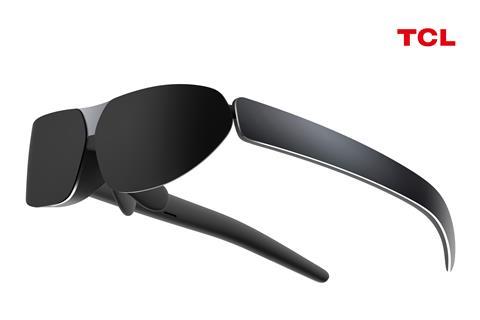 MAD Gaze, for example, markets GLOW Plus, smart spectacles equipped with a Sony HD Optical Display and a 53-degree wide field of view that projects a 118-inch virtual screen appearing to be three metres away from you. MAD Gaze dubs this “pocket-sized cinema” provided you can plug it into a phone or PC.

TCL demoed its version at CES. The Nxtwear Air “portable cinematic experience” boasts a 140-inch virtual screen from a distance of four metres. The field of view of the virtual display is 47-degrees. This is made possible by a pair of microOLED displays with 1080p resolution. The displays run at 60 Hz and support 3D imagery. Built-in speakers provide audio.

The experience could certainly be no worse than using an iPad and certainly better than your average in-plane seat back display.

This gear also targets gamers, which Sony’s new Playstation headset does specifically does. The new PS5 VR2 uses embedded cameras to reflect the wearer’s movements and field of view in-game. Those will combine with headset feedback and 3D audio to amplify the in-world experience, Sony said.

“Headset feedback is a new sensory feature that amplifies the sensations of in-game actions from the player,” Hideaki Nishino, the PlayStation executive in charge of platform experience, said. “It’s created by a single built-in motor with vibrations that add an intelligent tactile element.”

Portals to the metaverse

AR or mixed reality glasses are key to the next stage of immersion into the 3D internet or Metaverse and CES was awash with these concepts. 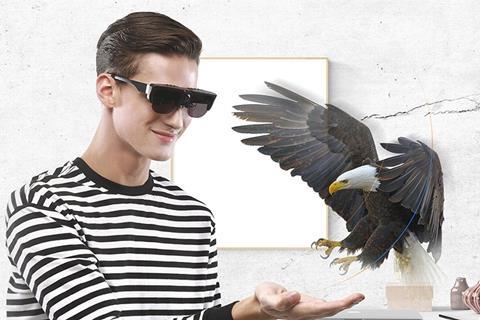 LetinAR - “The way humans see virtual images, as well as the real world, will be revolutionised.”

Chip maker Qualcomm wants to install its Snapdragon chip in as many such devices as it can to support the connected intelligent edge, which president and CEO Cristiano Amon said is a $700 billion market. “We’re becoming the partner of choice for the edge,” he declared in a CES keynote.

He announced an expansion of Qualcomm’s collaboration with Microsoft to accelerate this market sector. “We’re developing a custom AR Snapdragon chip for the Microsoft ecosystem,” he stated. “The Microsoft Mesh platform and the Snapdragon Spaces platform will be fully integrated into the platform, enabling next-gen lightweight glasses to help AR gain scale.”

Panasonic’s prototype MeganeX glasses incorporates Snapdragon and builds on the company’s developments in VR headsets. The MeganeX is equipped with 1.3-inch micro displays for HD resolution and a refresh rate of 120 Hz.

Korea’s LetinAR smartglasses house an OLED micro-display which reflects onto tiny mirrors inside the lens and then onto the eye. This patented Pinhole Effect helps achieve a wider field of view and brighter colours than most other glasses of their size, it is claimed. The mirrors are too small for the human eye to detect.

LetinAR says that, following the invention of the first eyeglasses in the 12th century and the 17th century development of telescopes and microscopes, a third optical revolution is imminent.

“The way humans see virtual images, as well as the real world, will be revolutionised,” it says.

Going one step further than AR glasses are smart contact lenses. California firm InWith Corp. has patented technology to embed microelectronics into conventional soft contact lenses. These have already been tested by lens maker Bausch and Lomb and InWith is now on the look out for developers to licence the tech which is connected wirelessly to a user’s phone. 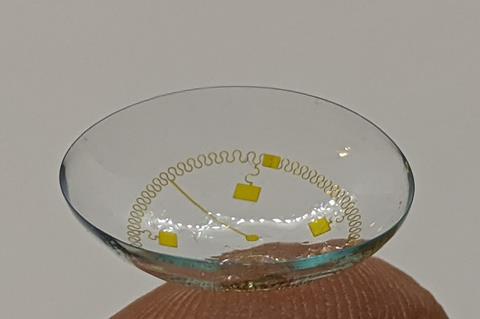 There are two applications for what CEO Michael Hayes calls “smart biology”: the ability to automatically retune a wearer’s eyesight to enable, for instance, bifocal short and long distance focus; as well as augmenting vision with digital overlays like wearing smart glasses.

Hays suggest these could be health related (such as monitoring blood sugar levels), functions familiar to smart watches like a gyroscope, real world information alerts (like restaurant discounts nearby) and eventually full immersion.

“Wearing bulky headsets on your face is not going to be the future of the Metaverse,” Hayes tells IBC365. “Today, with our tech you will be able to see 80-90% of information in a headmounted display in your field of vision and the technology will only get better from here.”

InWith has also patented technology to harvest energy from the normal blinking of the eyes. Commercial launch needs to clear US health regulatory hurdles although thinks this is not an issue.

Life beyond the glass

IMAX, 100-inch TVs and giant LED signage tends to mask the trend that most of our screens are getting smaller, not larger. The smartphone’s functions are already being dissolved into wearable or sensors all around us. With smart speakers, for example, we already interface with the cloud “without the intermediation of glass,” observes Deloitte Consulting’s futurist Mike Bechtel. 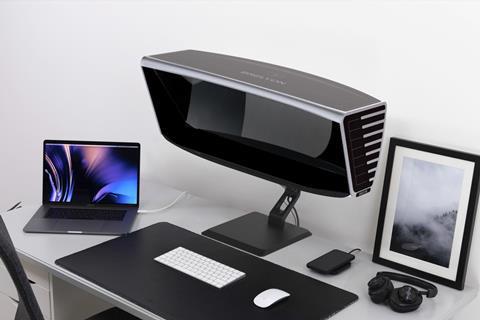 We’re on the cusp of ambient computing—a growing field of technologies and techniques that make digital reality available to users anytime and anywhere with increasing transparency.

Smart glasses are one step removed from where Bechtel thinks ambient computing is headed. “Think of this as bringing reality itself online,” suggests the analyst, “or painting atoms with bits, albeit with somewhat primitive brushes.”

Bechtel is projecting a decade ahead but the tech is already here.

Brelyon, an MIT spin-off, introduced a goggle-free virtual cinema screen. This still emanates from a 32-inch hardware but from which viewers sitting close up at 5-20 inches away perceive a 120-inch panoramic image. It uses lightfield techniques to bend light to the viewer’s eye. It’s not clear if more than one person can have an optimum viewing experience at the same time.

“The display provides a depth profile that is so natural to the eye that it relaxes the ciliary muscles of your eye and reduces your vergence stress, enabling comfortable extended use,” says the company, contrasting that with the discomfort of having to wear displays on your head.

In addition to home entertainment, the company also spies corporate applications where space is limited, by replacing six 32-inch monitors with the size of one.

“Brelyon is really the first company that is telling the AR and VR community, ‘Hey guys, wait a minute: Who said that immersion always equals headset?’” Heshmat said in an interview. “There is plenty of room between a near-eye display and a freestanding flat monitor. We are exploring that uncharted territory.”

In the same vein, Isreali firm Noveto was showing an AI-based audio sound bar that ‘beamforms’ pockets of sound just outside of your ears – “like two little invisible speakers” - that follow your head when you move. Combined with facial tracking and integration with smart assistants like Alexa, this creates an “immersive and personalised new listening experience never achieved before.”

Researchers and entrepreneurs are already exploring possibilities for implanted brain chips to augment our senses and (literally) read our minds.

“Why wouldn’t it be natural to look at the sun and see how many hours until sunset?” poses Bechtel. “Or look at a bus stop and see how many minutes until the next bus arrives? Curious to be sure, but perhaps preferable to staring at our phones all day.”

Samsung has baked a “NFT aggregation platform” into its smart TVs, presumably to integrate the purchase and trade of digital art and assets that us high rollers are all going to be doing in 2022. 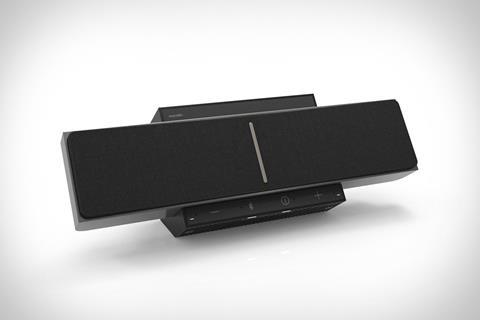 “With the new Platform, you can preview an NFT before purchasing it and even learn about its history — from who created it, to what comprises its blockchain metadata,” its press release explains.

Whether this is done with remarkable foresight or is simply the biggest waste of space in a TV ever is hard to tell but the firm was not alone in talking about non-fungible tokens.

“There is no question anymore that NFTs serve as a bridge between real-world and digital asset ownership,” says CEO and Founder, Michael Ou. “Practical enterprise applications and use-cases available across a variety of exciting new industries such as metaverse, Play-to-Earn and Play-to-Learn gaming are widely expected for 2022.”

In a panel discussion, Erick Calderon whose company Art Blocks is turning over millions of dollars in NFT related transactions warned that because a smart contract is operated by computer, “it’s also the most ruthless contract in the world.”

“The moment you register that seed phrase (a master password generated by your cryptocurrency wallet) you have to treat it like the valuable asset you have. Be careful with your private keys. This is still the Wild West.”