CTA boss: US and China are in artificial intelligence “battle” 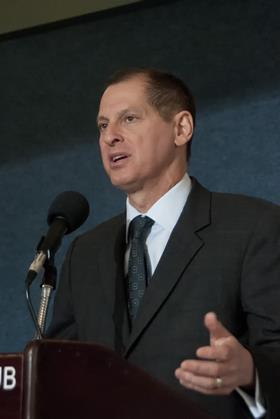 The US is caught up in a “battle” with China over the future of artificial intelligence, according to Gary Shapiro, president and CEO of the Consumer Technology Association (CTA).

The boss of the CTA, which runs the annual CES consumer technology exhibition in Las Vegas as well as CES Asia, told IBC365 that the contest for mastery in AI is much more than an economic and technological fight.

Shapiro sees it as a “battle” that will be fought over the next 10-30 years between two competing political systems: one that believes in the primacy of central government, the other in that of the individual.

The US, he added, is debating its AI strategy now. “We need to balance privacy and innovation. There is a trade-off. I’m not one of these people who says the government shouldn’t do anything.”

Shapiro believes the US government has an obligation to protect both sides. But he makes the point that sometimes citizens must give up some of their privacy for a “better purpose.”

AI-powered facial recognition technology, for example, “has a huge security value in high risk places like airports, where frankly I don’t understand the objection to it.” Shapiro added that a heavy focus on privacy in the healthcare industry “has cost us in terms of innovation.”

In 2017, China laid out a development plan to become the world leader in AI by 2030, aiming to surpass its rivals technologically and build a domestic industry worth almost $150 billion.

Since then, the world’s second-largest economy has been investing heavily to ensure its companies, government and military leap to the front of the pack in the technology.

Consultancy PwC estimates that by 2030 artificial intelligence products and systems will contribute up to $15.7 trillion to the global economy, with China and the United States likely to be the two leading nations.