In the wake of coronavirus, drive-in cinemas are undergoing a renaissance across Europe, but what are the best screen and audio options and can events organisers ever recoup the outlay on the tech investments involved? 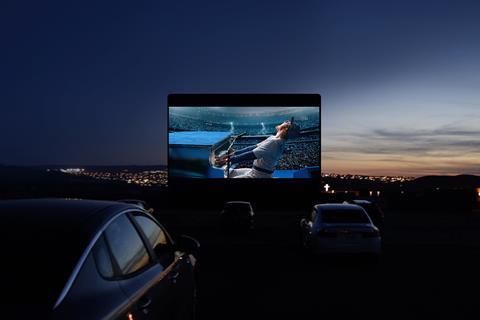 Drive-in cinemas: Experiencing a renaissance due to coronavirus

With many cinemas around the world now closed because of the coronavirus pandemic, audiences are starting to look elsewhere for their big screen fix, and where better than from the safety of their own cars?

Conjuring up images of 1950s Americana, drive-in cinema had largely fallen out of favour with modern audiences. Perhaps the prospect of sitting in a Vauxhall Astra in an airport car park is not as romantic as munching popcorn in Cadillac convertible surrounded by the Hollywood Hills.

But with social distancing becoming “the new normal” and the gradual loosening of lockdown rules for outdoors events, drive-in events are starting to make a lot more sense.

George Wood, managing director of the Luna Cinema, has been organizing events in unusual and iconic venues - from the rooftops of Shoreditch to the beaches of Brighton - for the past 12 years. He admits that, before the pandemic, he’d actively avoided dipping his toe into drive-in entertainment.

“We’ve always aimed for sociable and communal experiences and drive-ins are the opposite of that: they distance you from other audience members as you are cocooned in your bubble.

Now however, for all those reasons, it is exactly the right time to launch drive-ins, he adds: “They meets the requirements for social distancing and it’s a very old and quirky form of cinema.”

The events organizer has already announced a series of large-scale events from July – accommodating between 150 to 400 cars – with each pop up lasting a couple of days.

Luna is applying the same formula it has used for its other outdoor events and has sourced venues with exciting backdrops which, to date, include the Saracen’s stadium in Hendon’s Allianz Park, Knebworth House in Hertfordshire and Warwick Castle in the Midlands.

FM vs wireless speakers
Another point of difference is the sound system that Luna will be offering its audiences. Typically, drive-in cinemas deliver their sound over an FM radio frequency which the driver can pick up on their car radio.

However, there are several practical disadvantages to this: keeping the car radio on for the duration of a three-hour entertainment program can risk draining the battery, as modern cars require the full ignition system to be energised to run the radio. 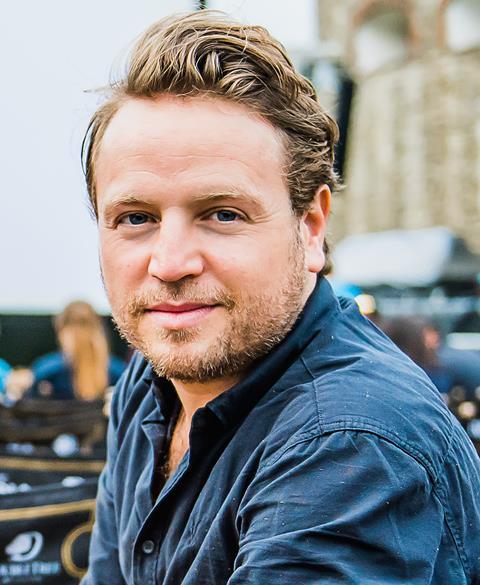 Also the sound quality very much depends on the type of stereo system the car possesses. And there will always be audience members that need help tuning in into the signal, something that’s just not possible with social distancing rules in place.

Another major barrier is the amount of time it takes for drive-ins to apply for the restricted service licence – which are awarded in the UK through Ofcom. Until recently there was a 60-day waiting period for such licences, but after observing the increased demand for drive-in events from the Worship and Entertainment communities, the regulator pledged last month to fast track the process to under two weeks.

Luna’s solution, however, requires no licence. The events organiser has teamed up with Orbital Sound to develop a bespoke sound system, which provides each vehicle with its own personal wireless speaker which sits on the car’s dashboard and claims delivers cinematic quality digital sound.

The Nemesis Car-Link audio solution - which Wood assures will be disinfected after each use - utilizes the FM modulator technology from Orbital’s museum audio guides and fuses it with a digital audio stream to create high quality in-car audio.

While the system is not cheap to acquire, Orbital managing director Chris Headlam claims that hiring the kit out to promoters on a cost-per-use basis makes it a more accessible option.

Much of Orbital’s work involves providing sound systems for theatre venues and exhibitions but, like many events-based companies, the firm is branching out into new areas as it tries to ride out the vacuum Covid-19 has left in its annual business plan.

“While I don’t think you can relocate your entire established business, you can take existing elements and amplify them, leverage your R&D and code writers and get to work very quickly,” he adds.

LED vs Digital Projection
Luna intends to make use of the firm’s existing armoury of screens, which includes both HD outdoor LED screens and Luna’s traditional digital projection cinema solutions.

“We’ll use a real mix depending on the site – LED walls are modular so you can make them as big or as small as you like,” says Wood, “Projectors, however, are easier to set up – it will take you a couple of hours rather than a couple of days – and the cost is generally lower.”

In both cases, he points out, the screens need to be elevated in drive-ins, so that they sit off the ground.

A major advantage of LED screens is that films can be screened in broad daylight because of the inherent brightness and contrast values.

This allows exhibitors and event organisers to show multiple films in a day as well as family films - although its worth noting that LEDs do require more power during the day.

While the company has registered interest from many territories including UK, the Netherlands and France, its own car-loving nation has been the most voracious consumer.

One German newspaper has reported that the number of driven-in cinemas in Germany has gone from the seven to a hundred this year.

And last month Celluloid Junkie reported that Germany’s Federal Network Agency has already assigned 43 frequencies for drive-in events and about 80 more applications have been submitted. 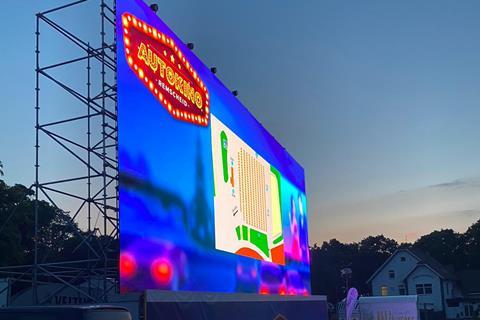 LED screens: Allow films to be screened in broad daylight

These have included the planning and implementation of a 20-metre wide LED wall and high-resolution outdoor LED cabinet to a drive-in event in Remschied, Hesse. The company also installed a 135sqm LED display for a drive–in cinema at Paderborn Airport in North Rhine-Westphalia.

Both installations were powered by Innlight’s own InnVision video controller that enables video playback.

Klem confirms that the transportation and construction of an LED screen can take around two days.  Other logistics can involve applying for a construction licence and supplying tons weighting to stabilise the screen.

While LED screens can be any size, for drive-ins the general agreement is the bigger the better.

Algirdas Ramaska, chief executive of Vilnius Film festival – who set up an event at an airport in Lithuania recently – has advised the Independent Cinema Office on this issue.

“We used a 150m² screen and that allows us to play to up to 250 cars. We raised it a few metres above the ground and that makes it about as high as a five-story building. He adds that for daytime screenings, the orientation is also important.

“You shouldn’t position the screen where the sun will be shining directly onto it, nor directly behind it (as it will shine into the audience’s eyes). So you need to consider the sun’s path and work out where to put the screen based on that,” he says.

It’s also worth noting that the majority of large screen LED rentals are not yet DCI compliant, meaning that the most recent studio releases cannot be screened. The films are either Blu-ray or are streamed in 4K.

There are however, drive-in cinemas that provide permanent or inflatable screens to buy or rent that do provide DCI-compliant projection.

German firm, Airscreen confirms that it’s received many drive-in enquiries for its inflatable frames and projectors and FM transmitters that can accommodate as little as 50 cars to as many as 500, depending on size and budget. 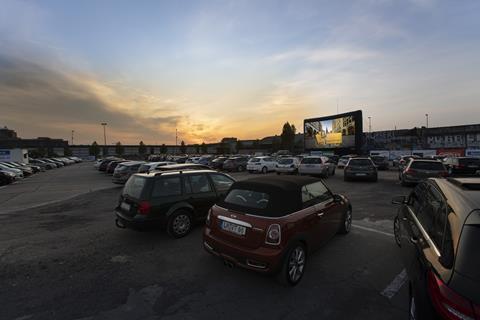 Airscreen: Has reported a massive increase in requests for their inflatable frames and projectors

Before coronavirus, the firm’s owner Christian Kremer says that outdoor cinema installations were more popular among his clients, but now it’s the other way around.  “We’re doing ten drive-ins for every one socially distanced outdoor cinema – the numbers have completely changed,” he says.

Since the pandemic Kremer had taken orders from locations as far flung as Argentina, Dubai, Finland - with interest also coming from Spain, France and the UK.

“We have a global network of rental suppliers with our screens ready to go,” he adds.

“The inflatable frames are low weight and easy to transport, but once you inflate them they are rock solid, stand strong and can be set up within a couple of hours by a rental expert,” he adds.

For children’s screenings and events that take place in the daytime Kremer is happy to defer to LED experts. But, he argues, for a true cinematic experience digital projection remains the best match because in his opinion, the colours in an LED are too extreme and can often look artificial.

“The pixel pitch can be good, but the LED screens provided by most rentals are not that perfect,” he claims.

Business models
Whatever the screen choice, putting on a drive-in event can be costly.

Besides kit and venue hire, there are also distribution and licencing costs, staffing, FM broadcast licensing (at between £400 [€440] and £1500 per application), event licensing and all the sundry costs that go with event organization such as power/fuel, ticketing and the insurance.

Wood believes that for Luna he can make the numbers work - even after the NHS donations: “Our big advantage is that we already have a database and we already have the kit,” he says.

The ticket price for Luna Drive-In, at £35 (€38) per car for two people with £5 (€5.5) extra per passenger, perhaps reflects the extra outlays required, and places drive-in cinema in the ‘premium event’ category, rather than the cinema-for-the-masses model associated with the old US style drive-in. However, this may evolve as time goes by. “We believe that this is something that we should be doing - getting audiences back to the big screen,” says Wood. “Drive-ins will hugely stimulate the appetite for the return of traditional cinemas as we can help win back people’s confidence,” he adds.

According to Klem, event organisers will need to create a drive-in that can house “at least 400 or 500 cars” to earn money back on a 4K LED screen and to make the most of the outlays, he thinks that the drive-in cinema will need evolve and become part of a bigger event offering – something, he notes, that is already happening in Germany.

“We’re doing a quote for an open socially distanced air picnic and car cinema in Dortmund with live music and a DJ which will last for two months,” he adds.

Elsewhere, German organiser D.Live’s lockdown friendly drive in cinema near Messe Dusseldorf exhibition centre has relied on sponsorship from a handful of firms including Volkswagen and soft drinks brand Fritz-kola to support its offering.

“While income is limited, if you are flexible and innovative with new business models it will be possible to make a profit,” says Klem.

Headlam meanwhile has been in discussions involving drive-in theatre, concerts, comedy and even pantomimes for children in time for Christmas.

“You have to beat a positive drum, out of austere events new great things can emerge – we shouldn’t be shackled by our comfort zone – it just takes the right group of people to think out of the box and the audiences will come,” he says.