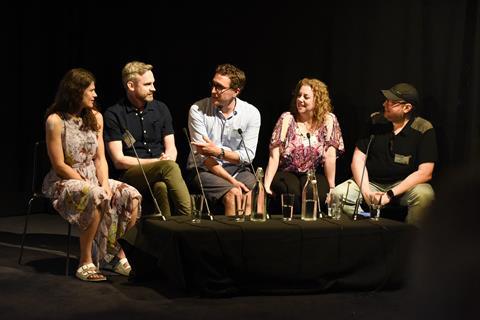 On a day structured around many brilliant personally selected clips that varied from The Trial of Ratko Mladic to Killing Eve, Baby Driver, Dunkirk and Spectre, 15 editors gave personal testimony to the difficulty of jumping to acknowledged editor.

The keynote speech was handed to Oscar winning editor Lee Smith, who has longstanding relationships working with the likes of Christopher Nolan, Sam Mendes and Peter Weir.

But the sessions gave a chance for other editors to discuss their experiences in the industry. The first, which was chaired by Job ter Burg, ACE, was billed as Cutting for Truth and Finding the Story. It featured the two ACE members: Michael Harte and Sharon Rennert, plus Anna Price and Will Gilbey.

Asked what led to him becoming editor of his first feature doc Three Identical Strangers, Gilbey said: “I had grown tired of editing. I felt I was losing ownership over my work.”

Seeing The Imposter re-energised him and he won a job where producers had the footage for a show about Heathrow, but no idea what to do with it. The key contact was director/producer Tim Wardle, and Gilbey went on to cut his One Killer Punch, and form a good relationship.

“When you click with a director, that’s magic. Tim kept mentioning the triplets’ story. And they were happy to use me even though I had not yet cut a feature doc.”

“When you click with a director, that’s magic.” Will Gilbey

Price got her job about the Bosnian War after meeting the joint directors Rob Miller and Henry Singer.

“I wanted the job. It is very much that chemistry thing with directors. It is a really gruelling film and I had to deal with a lot of footage,” Price said.

Rennert, meanwhile, offered some key advice for aspiring editors. She said: “The three things that I have learned are cut from the gut - follow your instinct and watch all the footage before making your choices - plus ‘less is more’, and ‘addition through subtraction’.”

A friend pointed her at the Bachelor/Bachelorette franchise when it needed editors, she recalled.

“The Bachelor show is all in the nuance of the editing. It has been on for 15 years and retains its ratings,” she said. “Each show is 11 acts, so it is divided by acts. Generally, you get two weeks to do your first cut.”

So how do you ensure the content stays fresh on huge documentary jobs? Gillbey claims it gets more interesting the longer you are involved. ”In the first few months so much content comes along every day, and it is brutal,” he said. “But in the last month you are moving almost completed scenes around.”

The calibre has shot through the roof
On another panel, Small Screen, Big Picture, moderator Adrian Pennington questioned if the stories scripted for TV are more ambitious than those scripted for most movies, pointing at budget parity and the booming international sales market. 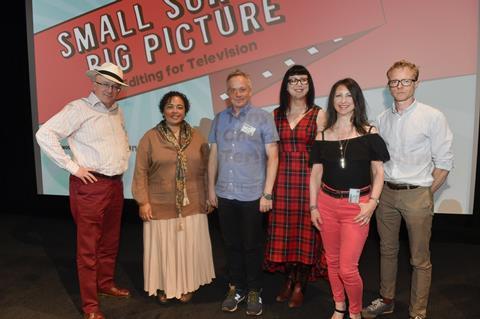 Pia Di Ciaula, a BAFTA-winning film editor who has also worked on TV shows including The Crown, said some of the TV scripts she reads “tend to be more exciting than feature scripts.”

“We have Oscar winning directors and actors working in TV, and the calibre has shot through the roof,” she added. Of The Crown, she said that is a” perfect example” of film people making TV and treating every episode like a feature film.

Tony Kearns, who also sat on the panel, said: “Thanks to streaming and to series like The Sopranos and The Wire that started the golden age of TV drama, you suddenly had a longer time to tell a more complicated story, and you can have story arcs within the main story arc. The one thing I am concerned about is the sheer volume of content there is now, and I wonder if it is becoming a bit overwhelming.”

Tea with Peter Morgan
On collaboration with other editors, Terilyn Shropshire, cutting Old Guard for director Gina Prince-Blythewood, said: “I just finished working on a series and I cut part one of four. It was incredibly important to collaborate with the other editors, and not only because with part one you are setting the tone. You also set up information that pays off later.”

When she had a cut that was ready to show she would bring the other editors in to take a look, she added. “I would also go to their rooms because I needed to see where the story was going.”

If an editor were working on any late episode, would he/she need access to the rushes from the outset?

Dollner said: “If you were working on any later episode that is when you go into the editor on the previous episode. That is where the collaboration comes in. It is quite a solitary role being an editor, and you spend a lot of time on your own working in a dark room. So it is nice to bounce ideas around.”

Di Ciaula added: “On the first season of The Crown, Peter Morgan invited all the editors for tea on Fridays and all seven of us would bring one scene and show it to the group. We were all trying to set the tone and the pace of the show, and we did not have the time to watch the rushes for every episode,” she added.

Cross is currently working on Bond 25 and won his best editing Oscar for Whiplash. He assisted for many years, starting at a New York commercials company.

He said: “I made my way through all the different genres in NY. My break into features came when I assisted Tim Squires, who was between features, on a commercial. He went to start a small indie feature and took me along with him.” 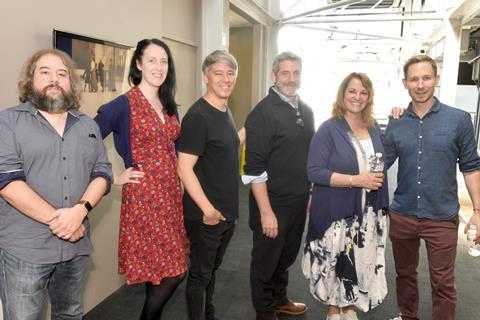 Cross moved to LA, and hooked up with John Axelrad, ACE for five movies. The door to his future was opened by a junior producer who pointed him at a feature film about “a jazz drummer with a script and a director, but no-one wanted to finance it,” he explained.

“They took 20 pages out of the script and made the short version of Whiplash that won the best short film award at Sundance. Then the financing came through.”

Early in his career, while working on The Thin Red Line for Terrence Malick, Graham was gifted some advice every assistant should heed. “One of three editors cutting it took me aside and said, ‘You just have to cut. No matter where you go and where you are assisting on a film, if you don’t get to cut, go somewhere else. You need to cut to cut’,” he said. Graham’s break came when he was recommended to Bryan Singer for X-Men 2.

”No matter where you go and where you are assisting on a film, if you don’t get to cut, go somewhere else.” Elliott Graham, ACE

Katz had the easy answer – “nepotism” through her famous father Sidney M. Katz. “One summer I went into work with him, and never left the cutting room. The steps to becoming an editor were just blessed because my father, from the second week, would say cut this and it was a scene,” she said.

Katz credits assisting another woman editor in California for her next big steps: “I learned so much about being a woman in the business, then went onto a film with her with a young director called Bill Condon on his first directing job,” she said. Katz has enjoyed prolific success with Condon.

I thought up this lie
O’Driscoll has some great second, first and assistant credits for films like Forrest Gump, Primary Colors, Driving Miss Daisy, The Last of The Mohicans and Death Becomes Her. He is currently working on The Witches with Robert Zemeckis. He said: “My plan was to be the world’s oldest assistant.”

He had gained cutting room experience on Creepshow, which had an all-British crew. But his next call to assist left him with a conundrum. ”All I knew is how to sync dailies and how to code, so first day in the cutting room I invented this lie. I told the editor: ‘I have all this experience, but it’s all been with British crews, so just show me in great detail exactly how you want me to do everything’.”

He spent 11 years with editor Arthur Schmidt, starting on Last of The Mohicans. He said: “Arty was just like God descends from the mountain. He never let me cut anything on film, but when we got to the Avid, both of us had to learn on location (for The Birdcage).” His big advance, he said, came with cutting a big sequence on Contact. 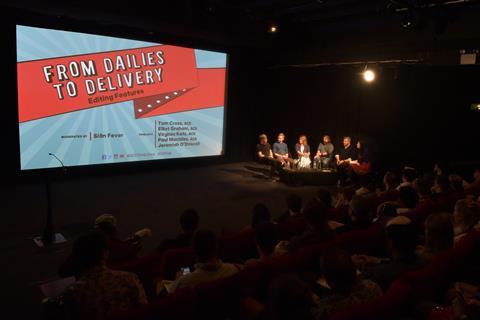 Aussie Paul Machliss (with credits for Black Books, Peep Show and the movies Baby Driver and The Kid Who Would be King) was taken to the editing of a commercial by his copywriting father, and was fascinated by the VT and CMX system used. His love of British comedy shows pushed him to use the U-Matic editing set-up in the ad agency.

“I watched outstanding comedy to get an understanding of timing,” he said.

Machliss went from runner at a TV station to a post house where he learnt online editing through the one-inch to Digital Betacam era. Sony then invited him to do product demos at NAB and IBC.

“My ticket to England: I got a job in Soho doing online editing. I learnt Smoke, and then I was given the chance to work with a very young kid called Edgar Wright, on a show called Spaced. Edgar asked me to finish the second series, and I took the leap into freelancing.”

Machliss is working on Wright’s Last Night in Soho.