Eurosport looks to “service the superfans”

IBC2018: Broadcaster plans to develop a global lifestyle platform around golf, followings its acquisition of rights to the PGA Tour.

Eurosport wants to use its $2bn deal with the PGA Tour to create an Amazon-style golf platform for superfans, according to its EVP and MD of Eurosport Digital Ralph Rivera. 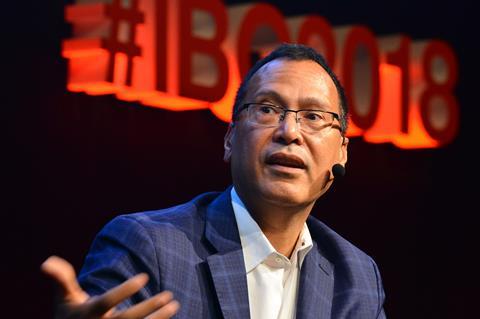 Speaking during a Track Headliner session on Sport, Rivera said that it would use the 12-year PGA Tour deal to “take the sport to the next level” by developing a global lifestyle platform around the sport. Eurosport parent company Discovery acquired worldwide rights to PGA Tour events outside the US in January.

“Our strategy will be to service the super fans and service the vertical. Digital success is a progression. It’s not a website or an app or even a product. You need to go beyond that and establish yourself as a platform that fuels a whole ecosystem,” he said.

He added that Amazon was the perfect example of a company that has gone through this progression and that it was no coincidence that Discovery (which now owns Eurosport) recently hired former Amazon Marketplace executive Peter Faricy to lead Discovery’s Direct to Consumer business.

“Discovery’s strategy is not just around sport. With the acquisition of Scripps Networks it is aiming to target other verticals too. It could be food, kids, home or travel,” Rivera added. (Discovery acquired Scripps, for $14.6bn this year, giving it control of channels such as Food Network, HGTV, Travel Channel and DIY Network.)

“We will use storytelling and video watching as the hub – and then link it to all the other experiences that are related to that passion.”

Discovery will sub-licence the PGA Tour golf rights in some territories, just as it does with the Olympics, which it has European rights to between 2018 and 2024.

“You need to establish yourself as a platform that fuels a whole ecosystem.”

In terms of subscribers Rivera revealed that snapping up the rights to the Olympics was “good for business”.

The exec said that, at the peak of the Winter Olympics in PyeongChang, Eurosport Player’s subscriber numbers shot up from 200,000 subscribers to 1.2m.

“Aside from rolling out new OTT live sport service [Eurosport Player] across all these markets we got over 1m subs which is unprecedented” he said.

“Covering the Olympics has also given us credibility in this space to deliver events at scale that has paid dividends in forming other partnerships – people can see what we can do with their brands,” he added.

Looking ahead to Tokyo 2020, Rivera predicted that social media influencers would play a much bigger role.

“For PyeongChang we convinced the organisers to allow us to have a mobile studio with social influencers reporting for different territories, that went from venue to venue to tell stories in real time about what it was like to be in and around the venues to provide authenticity for audiences.

“It was hard for us to gain permission but I suspect that most companies will push for having some form of mobile studio going forward.”

Rivera added that, following Eurosport’s 150 hours’ worth of 360 video coverage of the Winter Olympics, he would like to see more in Japan. “Can you imagine seeing a pole vault from above you?”

According to Rivera, Eurosport will also make more use of athlete data in a way that will allow fans to understand the dynamics of what’s going on in the competition: whether that be the speed of the skier or why the heart rate of a biathlete during different events is so crucial.

“There’s lots of data that technology can provide but it takes skilled storytelling to deliver the compelling news around it. That’s the difference between what an algorithm can do and what programme makers can do,” he said.