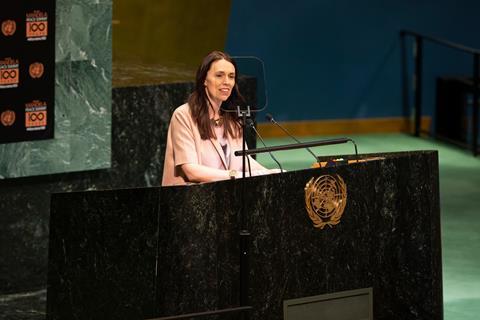 New Zealand PM: Ardern speaking at the UN in 2018

The watchdog, which was created in 2017 following a series of deadly attacks, was established with the aim of swiftly removing extremist content.

Speaking at a joint news conference with Facebook chief operating officer Sheryl Sandberg, New Zealand Prime Minister Jacinda Ardern said: “In the same way that we respond to natural emergencies like fires and floods, we need to be prepared and ready to respond to a crisis like the one we experienced,” reported Reuters.

Ardern was referring to the March Christchurch shootings in which 51 people were killed. At the time, Facebook was criticised when live video of the shooting appeared on the site.

She said the Global Internet Forum to Counter Terrorism would be governed by an operating board made up of company representatives and would have an independent advisory committee composed of government and civil society members.

According to the Reuters report, Ardern said some of the group’s work would be to fund and coordinate academic research on terrorism and violent extremist operations and on best practices for data sharing.

The announcement was made on the side lines of the United Nations General Assembly in New York on Monday.

IBC2019 keynote speaker Cecile Frot Coutaz, speaking with IBC365 ahead of this year’s show, stressed that YouTube’s “number one priority” is making sure it protects its users.

She said the platform has invested heavily in machine learning to detect such content, and “vastly increased” the number of human reviewers it employs.