From Russia with live: Your guide to the World Cup

It’s the World Cup of broadcasting. No event is bigger and every four years you can bet that viewing records will topple. 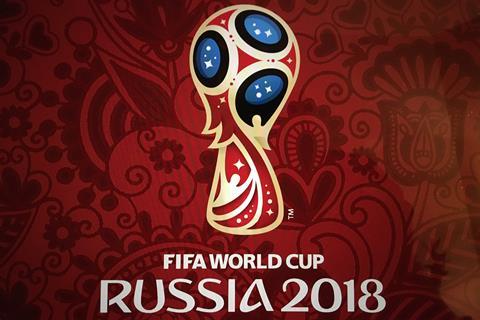 In 2014, more than one billion fans tuned in for at least a minute to watch Germany play Argentina in the final from the Maracanã, with the competition as whole reaching a global in-home television audience of 3.2 billion people, according to final figures from FIFA and Kantar Media.

An estimated 280 million people watched matches online or on a mobile device, in a further sign that more and more fans are embracing OTT technology for sports content.

When broadcasters buy the rights to show the World Cup they are purchasing the full production package from FIFA. They will tailor coverage with their own commentary and unilateral presentation from locations in Russia, but the entire live match feed including immediate pre- and post-game packages of the stadium and player/manager interviews is managed by FIFA’s TV division and its regular subcontractor the Paris-based Host Broadcast Services (HBS).

In total FIFA says FIFA TV produces more than 95% of the content the average fan watches at home.

It does so with help of a team of 3,000 on the ground in Russia who are working to a production plan “based on tried and trusted methods” established over successive tournaments.

The main innovation this time around is that all 64 matches will be produced in UHD as well as HD with the UHD feed also coming with High Dynamic Range (HDR) and immersive audio for rights holders set up to accept it.

Each of the 12 stadia are ringed by 37 cameras (up from 34 cameras in Brazil) including eight cameras capable of UHD/HDR and simultaneous 1080p/SDR output and another 11 with 1080p/HDR and 1080p/SDR dual output. 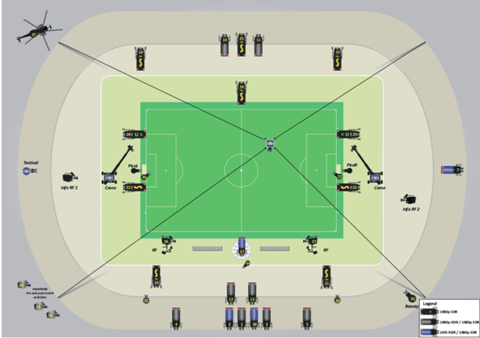 The use of progressive scanning as a baseline production format and HDR “will guarantee an improvement of image quality” all round regardless of the delivery format, says FIFA.

The UHD feed itself is being produced within the traditional 3G-SDI arrangement for ease of routing around outside broadcast trucks which have yet to make the switch to IP. Around 75% of the live match cut is estimated to be in full UHD HDR with the remainder up-converted.

The production and flow of content is co-ordinated from the IBC, a 54,000 m2 facility (the Crocus Expo centre) in Moscow’s north west outskirts, housing a satellite farm and the studio and production teams of 74 broadcasters.

The MCR is the central distribution point within the IBC for all incoming and outgoing feeds and for the first time all the signal formats including UHD HDR will be monitored within the IBC.

The headline innovation on and off the pitch is the video assistant referee (VAR) which will be run from the IBC. The VAR team supports the referee from a centralised video operation (VOR) able to view all relevant camera feeds from the 12 stadia and talk to the officiating referee ref via a fibre linked radio system. FIFA will be hoping that VAR goes a lot better than its trial at the Confederations Cup when there were several controversial decisions.

Going social
Aside from the main match, FIFA is also hoovering up more than 5000 hours of content into a massive server from which rights holders can cherry pick and assemble their own packages of highlights.

HBS have crews embedded with each of the 32 teams including a dedicated reporter churning out “exclusive and unparalleled content” destined for social media. This includes short form video featuring enlarged text and thumbnails to give users an imperative to press play; curated infographics culled from match stats; and stills with metadata designed to be “immersive, relevant and shareable” by being produced in a 1:1 aspect ratio to best suit handheld devices.

FIFA will publish and update Facebook community fan groups – one per team – and will produce a daily curated Instagram Story taking fans behind the scenes. However, Twitter is the social network of choice, provided with exclusive player and coach interviews, as well as video of pre- and post-match press conferences.

Kay Madati, Twitter’s vice president and global head of content partnerships said the World Cup, presents an “opportunity to marry the conversation that’s happening around the sport, and amplify it on our platform.”

Fox Sports is devoting a lot of attention to the platform too. Its partnership includes a daily, 30-minute live show and near-live highlights. Fox says it will turn around and publish clips of key moments, like goals, to the site in about two minutes.

Digital with Fox Sports
Fox Sports must have been confident that the Yanks would qualify for Russia when they spent $425 million to broadcast the 2018 and 2022 tournaments. The US teams’ failure this time may dent the broadcaster’s bid to recoup the cost in advertising but it is throwing the weight of technology behind the event to reach the widest possible audience.

For a start all 64 matches will be aired in UHD HDR on Fox channels to customers of AT&T-owned satellite network DirecTV.

After testing logistics in the cut-down production operation for last summer’s FIFA Confederations Cup in Russia, Fox is planning to stream every match live and throw in five ‘bonus’ streams alongside the main broadcast. There’s a Team Channel that offers three live video feeds including the match, players and the coach/bench alongside real-time stats. There will also be Match 360, a behind-the-scenes package running two hours before game time covering items like team arrivals and warm-ups. Tactical View is from FIFA’s cable-cam positioned high above the pitch, for analysis of team formations. After the match, the tactical feed switches to interviews and press conferences.

Also on the digital side, Fox has teamed with IBM and built an application called Highlight Machine. Fans are encouraged to build their own highlights reels from this World Cup and 300 archive World Cup matches from 1958 to 2014 and share it on social media.

The archive includes every final, most knockout matches, historic matches and epic upsets, and games played by the winning team. The platform will also spotlight classic players like Pele, Maradona, Cruyff and Zidane. Every match from 2018 will be available within minutes of the final whistle.

IBM’s Watson is doing the heavy lifting by sifting requests for content from different tournaments, teams, players and goals, fouls and more. The platform is sponsored by Adidas.

“To maximise fan engagement, sports broadcasters are driven to showcase relevant gameplay as quickly as possible,” explained Kristen Lauria, general manager of Watson Media and Content at IBM in corporate messaging. “This drive is even more critical during tentpole sporting moments like the World Cup. Our project with Fox Sports emphasises IBM’s focus on aligning its technology to simplify how media brands can efficiently deliver winning fan experiences.”

The IBM Watson technology has also been used on other premiere sporting events, including The Masters and Wimbledon. Fox Sports debuted IBM’s suite of AI-powered cloud video technologies at the 2017 US Open tennis.

Like the BBC and ITV, Fox is using the iconographic Saint Basil’s Cathedral at Red Square as backdrop to its main presentation. Its studio there will be ‘manned’ by robotic cameras, in part to make the most of a crammed real estate. A Mark Roberts Motion Control StudioBot offers up to nine axes of synchronised motion capability, and it can be programmed with repeatable shots including track, curve, rotation and reach moves.

Private box seat
VR has moved from trial to commercial reality for FIFA which has managed to sell its VR product for the World Cup to several broadcasters including Telemundo, BBC, Fox Sports and TF1.

All will be taking a FIFA-produced VR content which includes video for all matches as a live 180° stream as well as a set of 360° clips.

Each of the broadcasters is taking the basic FIFA-supplied app, developed by Deltatre, and customising it with their own commentary, graphics and language. The centrepiece is a virtual VIP lounge, an app which has been specially commissioned for the event, offering multiple 180-degree camera angles, highlights and a some 360-degree VOD features. 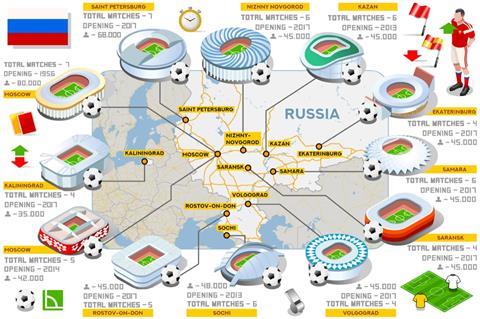 MediaLab TF1, the R&D-wing of the French commercial broadcaster, is also experimenting with interactive content accessible by Microsoft HoloLens glasses.

Holo Foot has been co-devised with Paris-based AR/VR specialist Immersiv.io and is suggested as “the future of entertainment”. Using gesture control, users can interact with statistics, stadium overviews, different view points, even 3D avatars of the players.

It can only be considered a trial though, which the BBC itself emphasises, since the stream published to the iPlayer app will need a connection to the home of at least 40Mb/s for viewers to receive the full fat UHD HDR version. Bandwidth capacity of the UK’s internet network will reduce the numbers able to view this stream to the “tens of thousands” reckons the BBC. Even then viewers would also need a 4K TV display capable of showing HDR.

Since the production workflow for the World Cup is not natively in HLG – the BBC’s preferred HDR format enabling standard dynamic range UHD receivers to exploit the backwards compatibility of the signal – the BBC will be converting it to HLG.

“For future events we hope the ground-breaking work [on HDR at the Royal Wedding] will lead to simpler, native HLG workflows which allow HD, UHD and UHD HLG versions of the event to be produced from the same camera feeds and without the complexity of metadata to manage through the broadcast chain,” asserts Phil Layton, Head of Broadcast & Connected Systems, BBC R&D.

The BBC is positioning the trial as another milestone in its long term aim to use the public internet as the backbone for all service provision.

“It will be interesting to see how the World Cup trial helps in the development of a universal open UK internet that supports such events,” says Layton.