Gender parity? A year on from #MeToo

It’s been a full year since allegations were first made against film mogul Harvey Weinstein, giving rise to the #MeToo movement against sexual harassment and assault, but have opportunities for women in the industry improved?

In the preceding year there have been surveys, self-imposed quotas, industry open letters, lawsuits and pay gap reports – although many were result of hard-fought campaigns and legislation that pre-dated the disgraced film executive’s dismissal. 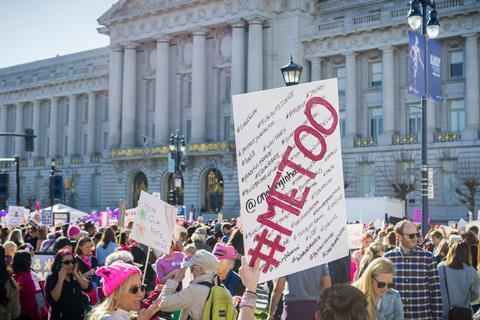 Me Too: January March in San Francisco, USA

It’s clear, however, that the events of last October have magnified existing initiatives and triggered a whole raft of new ones.

Trade bodies galvanised
While the Weinstein assault allegations were still raw, last November the UK’s campaigning body Women in Film and Television called for people to confidentially share their own experiences of bullying, sexual harassment and abuse of power.

Within a month it received over 100 submissions, which, according to WFTV Chief Executive Kate Kinninmont, will now be used to inform industry-wide guidelines compiled by WFTV, Directors UK, the BFI and Pact designed “professionalise” the industry.

The #MeToo movement was also responsible for galvanising a group 70 established female TV writers to pen an open letter to the UK’s drama commissioners asking one simple question: ‘Why won’t you work with us?’

The letter was a response to an ITV drama press release about upcoming series in which just one out of 10 scripts [Vanity Fair] was written by a woman.

The writers argued that prestigious drama work is still overwhelmingly a male preserve – a hunch borne out three months later with the publication of a survey commissioned by the Writer’s Guild of Great Britain.

The report analysed all the drama on British TV over a ten-year period and revealed some shocking findings. The percentage of television episodes written predominantly by women over 10 years is just 28%. This drops to 14% for primetime. The Guild has now called on public funders to pledge a 50/50 split between male and female-written films by 2020.

Minding the pay gap
The #MeToo movement has also helped shine a light on gender parity in the industry. The events of last October coincided neatly with the introduction of several gender pay gap laws in territories such as the UK, France and Germany.

Territory focus: France
This year the French government set out a ten-point action plan to combat the gender pay gap, where men are still paid on average 9% more than women. There are plans to increase transparency requirements for employers including a concrete methodology to calculate wage disparities, more frequent monitoring by the labour inspectorate and sanctions for non-compliance.

Companies will also have to publish their overall score on the unexplained pay gap on their website and French companies caught discriminating against women over pay will be given three years to close the gap or face fines.

In the film industry meanwhile, Françoise Nyssen, the French Culture Minister, announced a set of financial incentives in September to persuade film productions to hire more women. The announcement is part of a package of financial related gender-related measures, which will see films offered a bonus of up to 15% of their budget for hiring women in key production roles such as director or cinematographer.

Not to be confused with equal pay, which has been the law in many countries for more than 40 years, the pay gap refers to the percentage difference between the average hourly earnings for men and women at a company.

In the UK companies with more than 250 employees have been required by law to publish their own gender pay gaps annually since April 2017, making it an interesting territory to analyse a year on from #MeToo.

The issue that always grabs the headlines with the BBC is the pay of its high-profile talent – since early 2017 the public service broadcaster has been required, as part of its Royal Charter, to disclose a list of all those on its payroll earning more than £150K.

This year the corporation reported a slight narrowing in its ‘star talent’ pay gap: Out of its 64 high earning stars 22 (34%) are women, compared with 24 per cent in the previous year – the result of several of its most highly paid male staff agreeing to salary cuts.

While the BBC observes that it has “much work to do” in closing the pay gap (something it aims to achieve by 2020), overall the figures for everyone working across the organisation have improved. In July the corporation reported that it had reduced its mean average gap from 10.7% to 8.4% which is better than the national mean average of 14.5%.

Territory focus: Germany
In Germany, where the gender pay gap is one of the worst in Europe at 23%, the Wage Transparency Act took force in January. The act has been criticised however for lacking teeth, as unlike laws in France and the UK, the onus is on employees rather than employers to step forward and request information on wage discrepancies. Only companies of over 200 staff need comply, and at least 6 people of the opposite sex need to have similar roles to make a pay comparison. A reporter with German broadcaster ZDF lost a discrimination suit against her employer recently after a Berlin court ruled that employment conditions of a better-paid male colleague weren’t comparable.

Torsten von Roetteken, a retired judge and the author of numerous books on German gender-equality law said: “The hurdles are extremely high and require the individual to have a high tolerance and capacity for conflict. Even then, there is still the danger of open or hidden bullying.”

In the field of R&D meanwhile, some progress in being made. Fraunhofer – best known for its Vision & Imaging s and Video Coding & Analytics technologies - took part in an-EU-wide project designed to promote women in R&D by studying the effectiveness of equality measures in research. EFFORTI (Evaluation Framework for Promoting Gender Equality in R&I) is now planning an online toolbox to illustrate how the different effects from various equality measures can be assessed.

Speaking on the value of the project, Fraunhofer’s corporate culture and transformation head Dr Clemens Striebing said that the project was important for research and development “because tapping into the potential of women, older staff, or employees with different backgrounds translates into more creative ideas, broader perspectives, and new approaches.”

Channel 4, the other broadcaster to publish this year’s figures, also reported a slight narrowing in its much wider pay gap from 28.6% last year to 22.7%.

Compare this to the UK arms of international companies and the gaps get much wider. In March when Fremantle published its gender pay figures it was found that its UK company pays male employees 32% more than its female employees and with the gap rising to 84% when it came to bonuses. And at Turner, home to CNN and Turner Broadcasting systems UK, the mean gender pay gap is 20.5%.

Remove CNN from the equation and the mean pay gap at TBS is 30.2% - a figure that the company attributes to “a disproportionately large number of technical roles that attract higher average salaries, mainly filled by men.”

According to Aftab, change is beginning to ripple through the industry, but she admits that there are still a lack of females working in middle to senior management roles, which is exacerbating the the pay gap at companies like Turner.

Aftab, who runs a women in tech networking group at ITV, added that as well as tackling this pay gap, it was also important to change the perception of male versus female job roles in schools and colleges as well as amongst employers.

Industry initiatives
Championing women like Aftab, who influence and drive change across the industry was one of the main objectives at the IBC conference this year. IBC Head of Event Content Jaisica Lapsiwala sought to double the number of female speakers from 14% last year to 30% in 2018. 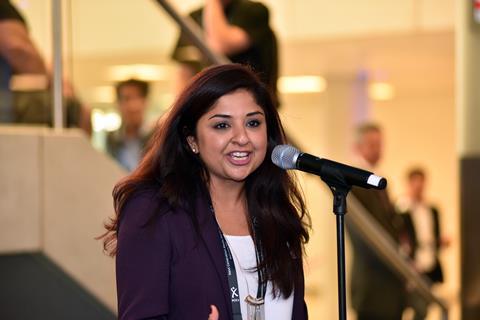 “We started looking more widely for talent from across the world. And the women were there; thought leaders, innovators, strategists, creatives, engineers and more,” she said. The final ratio of women on stage this year rose to 37% and the aim is to increase this to 50% next year as well as increasing the number of female visitors by 20% and encouraging more female engineers to submit technical papers in 2019 and beyond.

Support groups too have been helping to raise the visibility of women in technology roles. This year initiatives by the gender diversity advocate group Rise have included a mentoring scheme, which launched in March.

The scheme saw 17 mentees pair up with a variety of experienced industry professionals, which has already led to several promotions. Participant Christina Kassabian, a technical support engineer at Avid, said that the programme had given her “the guidance, perspective and confidence to flourish in the industry.”

According to Rise Chair Sadie Groom with the support of the IABM, the group is in the process of transforming into an official trade association, and is now looking to expand internationally in Australia, after launching in Singapore earlier this year.

Updated 8 Nov Meanwhile the #GoogleWalkout earlier this month week saw thousands of staff and contractors from the tech giant’s offices around the world walk out in protest at claims of sexual harassment and gender inequality.

Workers from Dublin and London through to Zurich and Tokyo ‘walked out for change’, a week after The New York Times (the same paper that exposed Weinstein) reported that Google paid a $90m severance package to an executive while concealing details of a sexual misconduct allegation against him.

Several tweets recording the action contained the MeToo hashtag – a sign of how synonymous the movement has become with gender equality and sexual misconduct. Will there be more revelations in the tech industry?

In the year ahead the gender pay gap, opportunities in the sector and general conduct now look set to come under the same scrutiny as the film and TV industry and current and planned equality initiatives should finally generate the impact they deserve.