IBC2017: There are now more than 50 commercial Ultra HD services worldwide, but for many broadcasters, moving to UHD is a more distant aspiration. 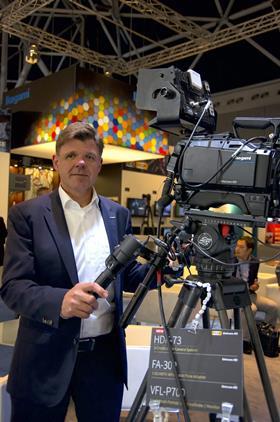 Those that have only recently moved to HD will not want to undergo yet another expensive upgrade so soon, while terrestrial broadcasters face severe bandwidth limitations that makes UHD an unrealistic proposition for the foreseeable future.

Fortunately, there is one part of the UHD offering that could be exploited without too much expense: high dynamic range, which can be included in the HD signal.

“There is much more interest in HDR than in 4K,” said Michael Lätzsch, Division Manager, Broadcast and Professional Video Division, Ikegami Electronics (Europe).

“People are looking for the possibility to add more value to their images, but with 4K you invest a hell of a lot of money for your infrastructure, and there are only limited UHD transmission possibilities right now,” he explained.

“The mixer, the router, the playout server, the transmitter, the cables – everything can do HDR”

“HDR has the wow effect. You see the image and say ‘I want that’, but it doesn’t cost much. You don’t need a special transmission chain, or contribution chain. As long as we have Hybrid Log-Gamma [for HDR], we don’t need any changes to the entire infrastructure.

“The mixer, the router, the playout server, the transmitter, the cables – everything can do HDR. You just switch the camera and you have the appropriate monitors, but Sony, LG and Samsung support HLG even for HD sets now.”

He expects to sell more HDR HD cameras over the next year or so than UHD. “There is very little interest right now in UHD,” following the big initial wave of sales to mainly big OB companies doing major sports. “Once that was done there was nothing.”

Now, he is seeing only slow upgrades to studios and other facilities within normal lifecycle investment. “It will increase, but it will go slowly,” he said.

Of course, Ikegami has a reason to highlight HD HDR as it has just launched a new HD HDR camera, the HDK-73 system camera, at IBC2017. It has been designed for the lower-end broadcast market, using the latest CMOS sensors with “very good sensitivity” of f13 and 61dB SNR, with new digital signal processors.

Ikegami shipped the first eight HDK-73 cameras to Master Film in Croatia the week before IBC, and is selling the package (including CCU, fibre connector, viewfinder and remote control) for less than €20,000 – with two versions: one with Lemo SMPTE connectors; the other with Neutrik OpticalCon, which have shorter transmission distances.