How they built it: TPC’s IP-based OB truck

As the industry moves to embrace IP production, Swiss broadcast service provider TPC has made history by offering the first uncompressed, UHD OB vehicle entirely based around SMPTE ST2110.

From the outside, TPC’s UHD1 OB truck looks like a normal, expanding-sided OB truck; the sort of 24-camera unit that appears regularly alongside any high-profile sports or cultural event. 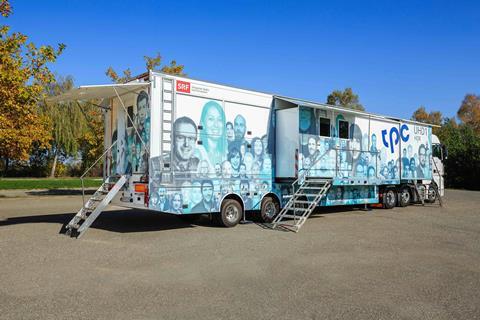 However, inside it’s a bit more than that; as the first vehicle based entirely on the SMPTE’s ST 2110 suite of standards for IP production, it’s both a new breed of OB vehicle and serves as a proving ground for ST2110 production technologies in general. And not just for OB either.

“Our main reason for UHD1 is that we wanted to get the experience in this new technology because we are constructing our new greenfield technology building, that will be on air by November this year,” explains Andreas Lattmann, chief technology officer, TPC. “At the very early stages it was clear that we would need another approach from SDI for this new building, but would also need to get experience in this technology at the small scale first. That was the main reason why we decided to go ST2110 with the truck.”

With discussions with major suppliers starting around summer 2016 (the building of Zürich’s TPC sports, news and technology center was announced a year later at NAB 2017), it was a brave decision not without some risk, as Andreas Kotulek, director Sales, Nordic, Central & Eastern Europe and Russia, Imagine Communications, explains. “TPC was clear it wanted a 24-camera Ultra HD truck with no compromise on operations, based on open standards. At that time no one in the industry could meet those requirements so, with the Alliance for IP Media Solutions (AIMS) and the SMPTE ST2110 timeline in place, TPC agreed to work with us on a development project to incorporate the emerging standards and recommended practices.”

A lot of the kit in the truck is standard broadcast issue; EVS slo-mo, Sony HDC 4300 cameras, Sony XVS-8000 vision mixer, and so on. From the Lawo VSM broadcast controller, onwards, what it runs on though is quite different.

Kotulek refers to Imagine’s Selenio Network Processor (SNP) as the core of the design; it provides all the high-density signal processing with complete freedom to select formats by signal or by production; provides advanced IP-to-IP video; and governs conversion between legacy SDI feeds and equipment and the newly built IP infrastructure. It also delivers gateway conversion to external SDI signals and feeds into commercial off-the-shelf switches from Arista Networks using QSFP28 ports over 100GbE links.

It’s a key component which, as Kotulek says, boasts functionality that would normally have been provided by a very large number of modular glue devices. Lattmann puts it more vividly: “From a physical perspective the IP network core is around an eighth of the size of a classical SDI system,” he says. “It is 24 rack units instead of three racks. It is a big weight difference as well.”

Systems integration and coach build was undertaken by sonoVTS, while Imagine’s Magellan SDN Orchestrator was used to provide a deterministic, fast switching layer; the idea being to provide a secure architecture that offered the same responsiveness and low latency as conventional technology.

One of the important aspects of the UHD1 project was to prove that one could change the underlying technology and operationally the truck would remain the same, with recognisable control surfaces and no detectable latency to hinder responsiveness from an operator-perspective.

Imagine’s Epic MV multi-viewer also provided fully flexible hybrid/IP, UHD-ready monitoring, while audio is based around the first commercial installation of Stage Tec’s IP-based Avatus console, featuring 48 faders and an Avatus subsidiary console with 36 faders. A Nexus audio network with a router and five base devices add to the audio lineup, while up to 10 stage boxes can also be connected. 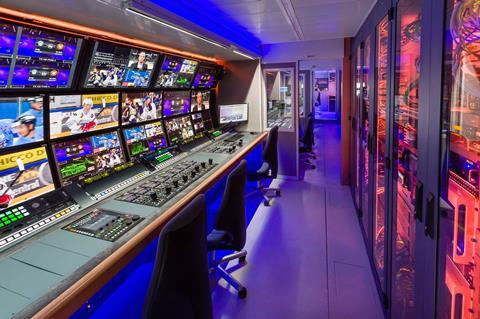 “Special challenges”: Inside the truck

As with much of the ST2110 technology in the truck, the Avatus console was being developed at the same time as the truck was being built in Munich.

“Special challenges were to be expected,” comments René Harder, member of the Stage Tec Management Board. “We entered into a development partnership with TPC in order not only to successfully master these challenges from a technical point of view, but also to incorporate the user’s requirements into the development process from the outset. This enabled us to optimize our concept of a fully IP-based audio mixing console from the user’s point of view, and our colleagues at TPC provided excellent feedback throughout the entire project phase.”

The result of Stage Tec’s efforts is that the Avatus will be officially commercially launched in June, highlighting the fact that UHD1’s role as a development vehicle cuts both ways and has been a valuable test bed for manufacturers as well.

“From a general perspective, ST2110 did not exist when we started, so here has been a lot of evolution throughout, including all the subsets of 2110,” says Lattmann.

“Our directors don’t feel an operational difference because it is IP underneath. The underlying infrastructure though is completely different and that give us flexibility.” Andreas Lattmann

“Equipment-wise it was a learning curve for the manufacturers as well as for us, because there was not much available at the time. There were still some compromises made to get standard SDI equipment introduced into the IP world via a gateway. Compared to the building we are working on, there is much more native equipment in the building than there is in the truck. But we are planning to change some of the truck’s equipment into native IP, so it will evolve through its lifetime.”

The truck’s debut was in October 2018 at a match in the Swiss National Hockey League in Zürich. Since then it has worked on numerous sporting and cultural events, including the six-day Spengler Cup ice hockey tournament, and the FIS Lauberhorn downhill ski races (the latter ending up using 26 cameras with the addition of a couple of remotes; “It was at the limit of its capabilities and we haven’t had any technical issues,” says Lattmann). It has also borne out TPC’s insistence on being format agnostic, having already been used in HD SDR, UHD SDR, and UHD HDR depending on client request. 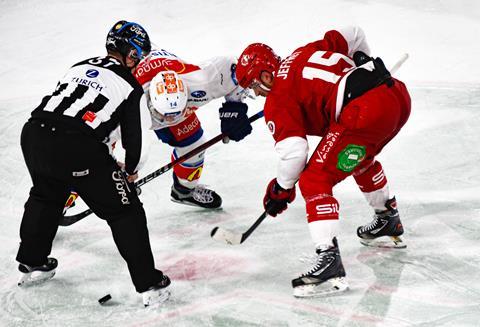 “The goal was to make conventional productions, so it looks quite conventional,” says Lattmann of its design and internal layout. “The feedback from our directors is that they don’t feel an operational difference because it is IP underneath. The underlying infrastructure though is completely different and that give us some very helpful flexibility.

”We are still trying out new things and need more awareness of the new flexibility and functionality, but [the crews] already work differently from how they would in a classical SDI truck. They think in a different way.

”A classic SDI approach sees you think about sources and destinations; you want to bring a specific signal to a specific destination. With IP though you have everything available in your network and it’s a question of choosing what you need: you still match an audio or a video source to a destination but the process to get that is different now.”

Lattmann says that from a confidence perspective, the technology is there and ready to be used. “People trust the technology and they like to work with the truck and in the truck,” he says. Its development has also helped TPC to work through some issues with the ST2110 subsets, PTPv2 timing issues, for instance (ST2110-10), leading to a reengineered synchronisation concept for the forthcoming building.

At Imagine, Kotulek talks enthusiastically of the next big advances in the AMWA NMOS (Networked Media Open Specifications). “ST2110 determines how devices talk to each other: NMOS IS-04 defines how devices discover each other, and IS-05 determines connection management. Then will come IS-06 – network control – and IS-07 – events and tallies – to round out the interconnectivity architecture. With these, then IP-connected systems will be as plug-and-play as SDI video,” he says. 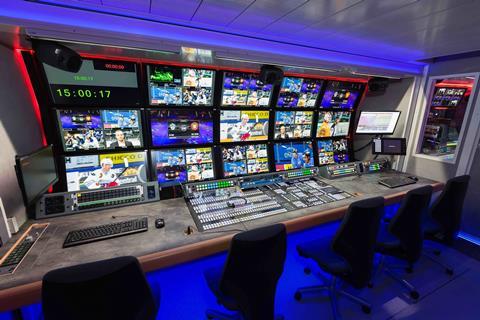 “What we proved with UHD1 is that to get the functionality and capacity you need into a production truck — or indeed for any kind of live production — you can now use software-defined, IP-connected technology without compromising operational familiarity or flexibility.

For the immediate future at TPC, there is obviously the new IP-centric TPC sports, news and technology center later in the year to consider. The company is also building three new trucks for parent broadcaster SRG SSR, so that each Swiss language region will get a new vehicle. Lattmann says IP will enable them to use a more modular approach so that here are more options available than using “a 40 tonne OB van just for a six camera production.” Next generation IP technology, he says, will enable TPC to achieve the flexibility and scalability it wants.

“We challenged our manufacturers,” he says. “But now we know what we are talking about because we have the experience and we know what the real world challenges are, even if they are not as big as some people think. It’s not rocket science on one hand but it’s not standard, plug and playable technology on the other.”