The Covid-19 pandemic has accelerated adoption of remote production. For New Zealand VFX firm Virtual Eye and its sports broadcasting partners, the switch to remote with AWS also offered a chance to reduce its carbon footprint, writes James Pearce. 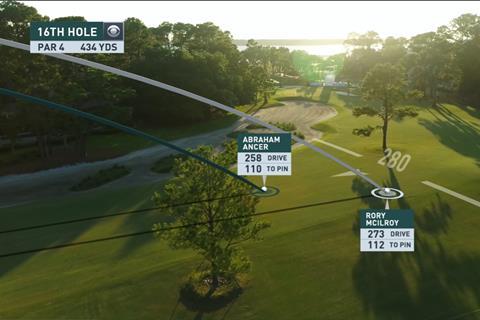 Virtual Eye: Moves to remote production with the help of AWS

The coronavirus pandemic at its height posed serious challenges across the media and entertainment sector, not least to sports broadcasters and their partners as events were shut down for months on end.

Geographical challenges also played into how difficult managing the crisis was, with states across the world shutting down travel and borders.

Though New Zealand has been held up as one of the best performing nations when it comes to Covid – at the time of writing, 25 people have died in the Australasian island, which has a population of 4.9m – the remoteness of the country became a serious challenge for Kiwi M&E firms with international clientele.

It was this unique situation that saw Virtual Eye – the sports division of New Zealand-based Animation Research, which is one of Australasia’s leading 3D computer graphics production houses – partner with Amazon Web Services to overhaul the way it operates across the globe.

For more than 25 years, Emmy Award-winning Virtual Eye has specialised in 3D TV graphics that are used in high-profile sports. It has delivered those experiences on multiple platforms for events such as the Ryder Cup, The Open Championship (The British Open), the US Open, the America’s Cup, Formula 1, The Olympics, World Rally, Red Bull Freeride Tour, The Ashes, and both the PGA and European golf tours.

Virtual Eye’s partners include some of the biggest broadcasters in the world, from NBC in the US to Fox Sports in Australia. It would typically send a team to operate on-site production support, creating 3D graphics at more than 90 tournaments a year across Europe, Asia, the Middle East, Africa, and the US.

“This was set to be our biggest year ever,” explains Ian Taylor, managing director at Virtual Eye. But then on Friday 13 March – “a bleak Friday if ever there was one” he adds – US sports tournaments began getting cancelled.

“We had to devise a platform that would allow us to do everything remotely from New Zealand. The flexibility, scalability, and security of AWS was the answer we needed for cloud-based remote production operations,” ~ Rendall.

“We flew back to New Zealand and began locking down, but one of the things we began to think about was, when sport started up again, how we could move our operations to a remote model.”

Taylor acknowledges that, as with much of the industry, Virtual Eye already had longer terms to switch to remote production, but says the plan was “several years away”. Covid changed that. 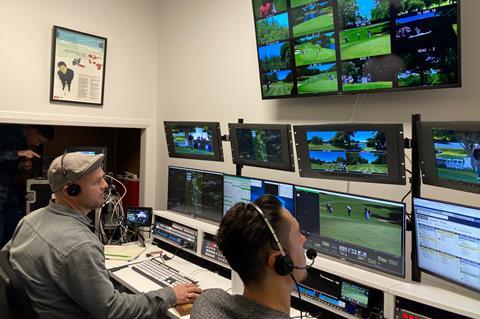 Remote: Virtual eye can now reduce its carbon footprint and save money on plane tickets

Race to remote
Not only did it become a major risk to have their operators roaming around the world but countries, including New Zealand, were already closing their borders. ARL head of technology John Rendall and his tech team had to think about how the animation and VFX house could deliver to its clients if sporting events around the world resumed, but the ARL team couldn’t be on site to support them. “We had to devise a platform that would allow us to do everything remotely from New Zealand. The flexibility, scalability, and security of AWS was the answer we needed for cloud-based remote production operations,” says Rendall.

AWS offers a unique position due to its global access points, claims Geoff Steadman, enterprise media strategist at AWS Elemental. “This project is really leveraging a couple of key aspects of AWS. One is our global footprint, and the fact that we’ve got the ability to connect regions of the world together on a backbone that runs over the AWS cloud, which is highly reliable, very high performance, and constantly managed and monitored on behalf of our customers.

“The second component from AWS is this is a media service we call AWS Elemental Media Connect. Connect essentially adds a quality of service layer on top of the AWS network, specific to video, and it’s a service that provides very reliable secure transport service for live video.”

In just six weeks, Virtual Eye worked with AWS to build a new remote production facility, which it has now been using for over three months.

They used AWS for not just services, but all of the networking side, including site-to-site connections with a VPN, through AWS Global Accelerate. AWS’s global presence has also allowed Virtual Eye to plus into its partners’ networks, boosting connectivity. For example, with Fox’s coverage of crick, it can connect to NEP (Fox’s facilities partner) through an Equinix network switch in Sydney, meaning it can have layer two connectivity throughout.

“We had to move quickly, so we began initial discussions with our partners to get a better idea as to what equipment they were using, so we could future-proof our business,” explains Rendall. “We are currently moving to SMPTE-2110 and moving away from baseband SDI. So, we had to think of encoders and decoders that are future-proofed.

“We are using OBE encoders and decoders on the golf – they have been great to work with,” he adds. The Kiwi company is also looking at using Haivision Connect encoders for its coverage of cricket. For talkback, Virtual Eye installed RTS intercom systems because some major partners were already using those systems, making integration easier.

AWS took the challenge on, knowing that Virtual Eye was looking to move swiftly.

“When someone has this kind of a challenge, it was great to look at what we had already available, and help people understand how to take advantage of it,” explains Stedman. We have already got this global footprint; we’ve got these regions set up around the world. And we have Media Connect, which is a real time live video transport service. And so, we can already stand one up in a region to ingest content.”

“So, we’re, we’re continuing to, to look at places around the world where we need to increase our presence and are constantly looking to continue innovating,” adds Stedman. 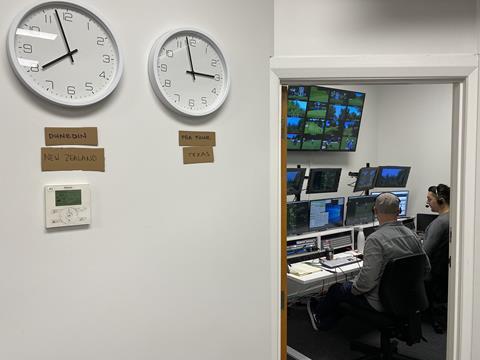 John Rendall: ”We have now delivered every tournament for the past 3 months”

Green envy
The AWS architecture was put to the test at one of the first sporting events back after the initial COVID-19 shutdown, the Charles Schwab Challenge PGA golf event in Dallas/Fort Worth, Texas. From 7,500 miles away, Virtual Eye provided CBS Sports with augmented reality, virtual ball tracking and other graphic elements, rendered in real time, for the enjoyment of fans at home. “The system worked flawlessly,” said Rendall. “We have now delivered every tournament for the past 3 months and we are currently gearing up for both the US Open and The Masters.”

One key concern for Taylor was the opportunity to reduce Virtual Eye’s carbon footprint. Travelling from New Zealand to events across the globe meant Taylor’s team would rack up the air miles, costing them almost a million dollars a year.

“Travelling from the bottom of the world isn’t always the most sensible thing,” explains Rendall, “but we sort of love it. We will continue to travel because you need to meet partners all over the world.

“Sustainability is a huge priority for us,” adds Taylor. “I used to travel from New Zealand to London and back once a month on average, and it drove me crazy thinking what it was doing [to the environment].

“With the help of AWS, we are able to support multiple simultaneous remote productions without having to deploy large crews and to reduce crew size by an average of more than 80% for multi-day events.”

So, what of the future, now Virtual Eye is fully down the remote production rabbit hole? The next addition will be a private network into the company’s Dunedin facility, set to be provided by infrastructure firm Megaport. This will give it even faster fibre access to AWS functions, as well as lower latencies for its partners.

“We’ve just had 10G put into our office, linking directly to Auckland, and set up with Megaport, who have on- and off-ramps all over the world, giving us the links we need,” explains Rendall. “It is only 23MS to Australia and 250MS to parts of the states, so it is unnoticeable for a lot of our partners.”

“I don’t have a technical background,” concludes Taylor, “but as soon as John showed me what Media Connect could deliver to solve this problem we had, it was a no-brainer for me.

“Moving video around the globe is always challenging and expensive, whether you were using satellite links or dark fibre lines. Media Connect allows companies like us and a lot of broadcasters to do this without the huge costs associated with it previously. AWS has such a good array of services. And a lot of our customers are using the same tools we are.”